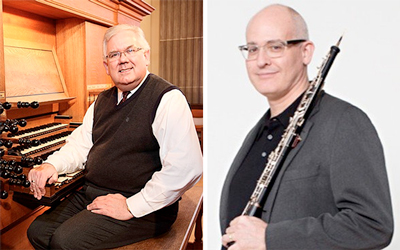 English horn and organ make for a wonderfully sensuous combination, contrasting the mellow, almost mournful sound of the oboe’s big brother with the clarity of the organ’s tone. Oberlin Conservatory faculty members James David Christie, organ, and Robert Walters, English horn, (who is also a member of The Cleveland Orchestra) played a lovely recital on Sunday, September 27, at Immaculate Conception Church, on Superior Avenue just east of E. 40th Street in Cleveland.

The church, founded in the 1860s by Irish farmers in the neighborhood, is a spacious gothic structure, with high ceilings and a reverberant acoustic. The church’s repurposed 1950s Casavant organ sounds splendid, despite its relatively modest size. The program included both organ solos and duos with the English horn.

James David Christie opened with Georg Böhm’s Praeludium in C Major. A composition of the mid-Baroque era, Böhm’s prelude is in several short sections, some declamatory and toccata-like, others fugal, with various motivic structures showing off the organ’s quite clean-sounding principal chorus. Christie caught the fantasy aspects of the piece, using flexible phrasing and articulation.

Charles Callahan (b.1951) is a well-known American organist, conductor, composer, and church musician. With its conservatively modern harmonies, long-flowing, lyrical melody, and lush registrations, his Canticle for English horn and organ was a high point of this concert. The live acoustic of the church enhanced the effectiveness of the work.

The organ works of Frenchman Guy Ropartz (1864-1955) have gained a certain currency among some organists in recent years. Christie played Ropartz’s “Sortie” from Six pièces, composed between 1896 and 1901. The composer’s life and career spanned the era of most of the great French Romantic organist composers (Franck, Vierne, Widor, and Tournemire) as well as into the following generation that included Jehan Alain, Olivier Messiaen, and Jean Langlais. This “Sortie” (the organ “postlude” or closing recessional piece of the Mass) showed Ropartz’s knowledge of the organ, and Christie performed it with great flair. Workmanlike rather than inspired, and longer than its musical substance supported, it was not particularly interesting musically, as compared to the masterworks of Ropartz’s contemporaries. There were several places where the composer could have reasonably concluded, but instead revved up for more.

Despite Robert Walters’ consistently fine playing in this concert, his selections resembled one another in their slow to moderate tempos and lyrical style. He allowed himself few opportunities to play in a fast tempo or show off his virtuosity. Lynn Trapp’s “Cantilene” for English horn and organ was pleasant, but not particularly memorable. It had similar characteristics to Callahan’s Canticle, but not its harmonic or melodic interest. Heard on its own, it likely would have made a stronger impression.

The last segments of the concert were devoted to two significant 20th century French masters, Jean Langlais and Jehan Alain. First, James David Christie performed “Acclamations” from Langlais’ Suite médiévale, based on the medieval “Christus vincit.” Langlais’s own modal setting built to a thrilling climax, as Christie pushed the organ to its dynamic limits. Christie and Walters adapted three of Langlais’ works for organ and English horn: the “Prelude on a Kyrie” from the organ suite Hommage à Frescobaldi, plus two of the composer’s Cing pieces for violin and organ. The transition from violin to English horn was effective in these short, plaintive movements that resembled French folk songs.

The program ended with a fierce performance of Alain’s Litanies, a piece characterized by a constantly repeated motif and great dynamic contrasts. Christie’s playing of a toccata-like passage near the end while performing a diminuendo was thrillingly ferocious, as were the final climactic measures that end on a gigantic, dissonant chord. When that chord was released, the sound continued to waft through the great church space.