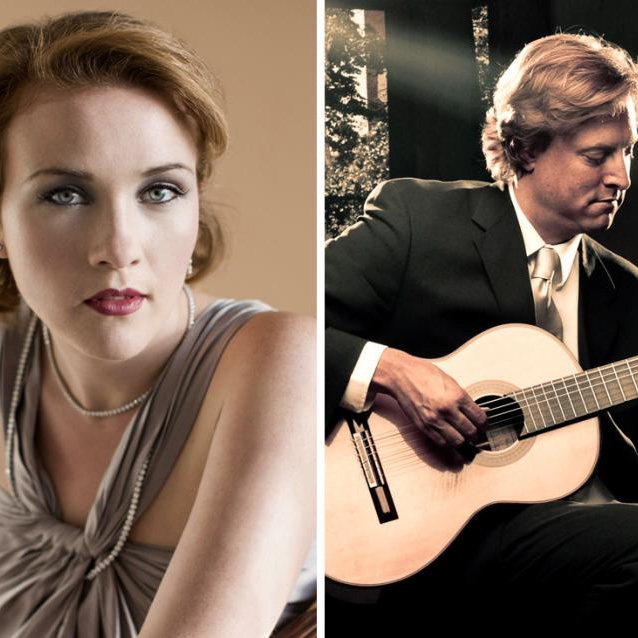 Two of Cleveland’s distinguished concert organizations — the Cleveland Chamber Music Society and the Cleveland Classical Guitar Society — put their resources and audiences together for a winning end-of-season concert by guitarist Jason Vieaux and mezzo-soprano Sasha Cooke on Tuesday, May 8 at Plymouth Church in Shaker Heights. Inspired by folk music, jazz, and Broadway, the repertoire may have seemed light compared to what string quartets bring to the CCMS series, but Vieaux and Cooke brought committed professionalism to each item on the menu.

Manuel de Falla’s Siete canciones populares española set the tone for the Spanish set that opened the evening, dressing folk songs up with a veneer of sophistication that made them at home in Parisian salons. Cooke applied her rich, expressive voice and crisp diction to each song, and Vieaux was attentive to every change in mood and texture.

Cooke and Vieaux ended the Iberian chapter of the program with three selections from Enrique Granados’ 12 Tonadillas al estilo antiguo, playful and sometimes mysterious little scenes inspired by the paintings of Goya.

Moving to the New World, the performers gave charming performances of four of Aaron Copland’s ten arrangements of Old American Songs, with piano parts adapted to the guitar by one of Vieaux’s students. Cooke brought her malleable vocal gifts to stylish performances of “Simple Gifts” (a Shaker song), “The Little Horses” (a lullaby), and “At the River” (a gospel hymn), and tossed off the banjo-inspired nonsense syllables of the minstrel song “Ching-A-Ring-Chaw” with abundant humor.

The evening ended with Vieaux’s solo version of Pat Metheny’s touching Always and Forever (the jazz composer is one of the guitarist’s “obsessions”), and three Leonard Bernstein songs, one of them the familiar but haunting “Somewhere” from West Side Story, the other two from more obscure musicals. Sasha Cooke made rich little scenes out of “Who am I” (Peter Pan) and “My New Friends” (The Madwoman of Central Park West), and once again, Jason Vieaux provided colorful instrumental support. Who needs a piano when a fine guitarist can do the job so eloquently?