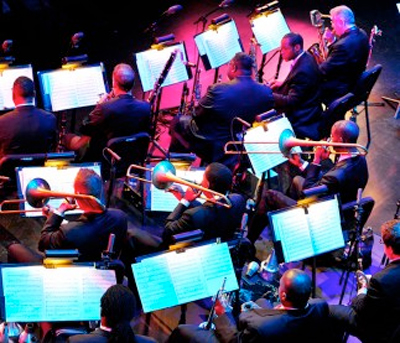 I had no idea how wonderful a jazz orchestra would sound in Severance Hall! With discreet miking and an excellent speaker system, Jazz at Lincoln Center Orchestra with Wynton Marsalis produced tremendously vivid music which the hall supported and enriched just as it does with Mozart and Mahler. Even the visuals seemed to converge: the ornate 1920s Art Deco roulades of the ceiling were perfectly matched by the intricate roulades of the extended solo improvisations.

The fifteen musicians were arranged in tiers: four trumpets in the back, and, in front of them, three trombones. In front, on the stage floor, were the reeds (five players on various sizes of saxophone, flute, and clarinet) and on the side, the rhythm section (piano, bass, and drums). The members of each section sported matching shirts and ties with their elegant black suits (blue shirt, pink tie for the reeds, for example). Brooks Brothers was listed as the official clothier. (Cleveland Orchestra, take note!)

The orchestra is composed of virtuoso artists for whom performance is clearly central — the group has a very active touring schedule. But education seems to be at the heart of its mission as well, with most or all of the members teaching at various schools. The group as a whole is obviously committed to shaping wider audiences for classic and new jazz. Many of the group are accomplished arrangers and composers, as well, resurrecting old tunes and writing new ones.

The orchestra is directed by the distinguished trumpeter, composer, and educator Wynton Marsalis, but with very little conducting—what cues there were came usually from saxophonist Victor Goines in the front row. Marsalis, though, is the front man, and was the host for the evening, introducing the music and acknowledging the soloists with enthusiasm and grace. Opening the program, Marsalis showed his extraordinary command of the trumpet in a movement from his 1997 oratorio, Blood on the Fields, about the passage from slavery to freedom. The music was intricate, passionate, and gripping in its virtuosity and sincerity. 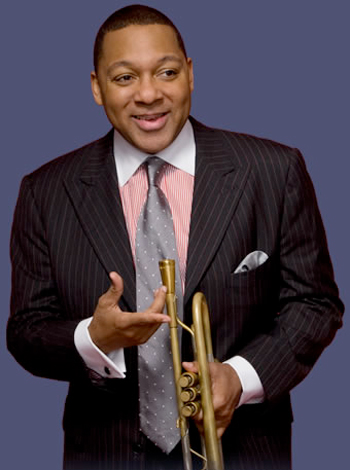 New music was featured throughout the evening. Trombonist Chris Crenshaw’s The Prodigal Son is a reference to the poem of the same name by African American poet James Weldon Johnson, with its wonderful line, “Your arm’s too short to box with God.” Crenshaw’s composition was alternately combative and solemn, with some spectacular high wailing on clarinet and soprano sax by Victor Goines.

A movement from Goines’s own 2014 suite, Crescent City (an homage to New Orleans), showed the orchestra in a mellower mood. An almost languorous waltz, it featured a series of delicate, watery trills on the clarinet (Goines) complemented by a trumpet solo full of liquid chromatics (played here by Kenny Rampton).

An expansive composition by the young bass player Carlos Henriquez, who served as music director for the orchestra on its Cuban tour in 2010, provided a powerful Caribbean frame for extended solos by pianist Dan Nimmer, saxophonist Paul Nedzela, trumpeter Marcus Printup, and Henriquez himself, who embarked on his own virtuosic journey up and down the fingerboard of his instrument.

The most challenging of the new works on this program was by wind player Ted Nash: a movement of his 2014 Presidential Suite in homage to famous speeches about civil rights. This edgy piece, which treats Nehru’s 1947 “Tryst with Destiny” speech on the eve of Indian Independence, is driven by a relentless 7/4 rhythm and features Nash’s saxophone in an earnest plea — for independence? Or, with the knowledge of the terrible riots that followed independence, for tolerance

New works shared space easily with old tunes on the program. A brash and happy Afro-Cuban piece by Dizzy Gillespie gave Ted Nash front-row prominence for a witty flute solo. Count Basie’s I Left my Baby sent the band into an anguishingly slow blues tempo, rich and insistent, about the pain of parting. Trombonist Crenshaw channeled the Count on vocals, with solos by Walter Blanding (saxophone) and Vincent Gardner (trombone).

“March Past,” a character piece from Oscar Peterson’s 1964 Canadiana Suite (here arranged by Vincent Gardner), ran witty variations on a simple motif, including some Sousa-like piccolo playing from Ted Nash, a riveting solo by reedman Walter Blanding, and a spectacular drum solo by Ali Jackson, opening with a deceptively simple march beat on the snares and building to an explosive grandeur that seemed to involve every skin, block, and bell on the drum set.

Gershwin’s “I Got Rhythm,” in a 1932 arrangement by Don Redman, featured all three trombonists passing the tune around — Crenshaw in an up-tempo exposition, interrupted by Gardner with a witty and often startling solo, and finally taken over by Elliot Mason in a burst of energy.

“I Got Rhythm,” full of syncopation, is an obvious jazz standard, but that could hardly be said of the unlikely tune arranged by saxophonist Sherman Irby— the children’s song Baa, Baa, Black Sheep. With tongue in cheek, Irby has made a fascinating composition out of the simplest possible tune (as his predecessor Mozart has been known to do). Irby was visibly cracking up as his colleagues successfully imitated the bleating of a herd of sheep. He recovered amply for his extended solo, rich with contrapuntal complexity.

The full house at Severance Hall was warm in appreciation of the solos and the ensemble throughout the evening. At the end, a standing ovation brought Marsalis back onstage with his rhythm section for an intimate version of Gershwin’s “Embraceable You.” It was a perfect morsel—sweet but with just a tang of the bitter—to close out an evening of inventive and moving performances.

END_OF_DOCUMENT_TOKEN_TO_BE_REPLACED

Supported by engagingly, yet simple staging by Cara Consilvio, a well-prepared cast of singers told the archetypal story of Cinderella with charm and flair. Framing the production was  a sparse but colorful set and wonderful lighting by Dave Brooks. END_OF_DOCUMENT_TOKEN_TO_BE_REPLACED