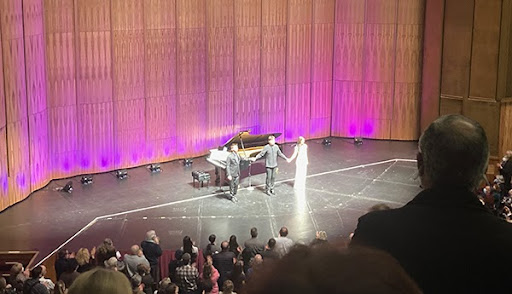 Just in time for Valentine’s Day, Tuesday Musical delivered a sweet, romantic evening on Tuesday, February 8. Violinist Joshua Bell and soprano Larisa Martinez, who were wed shortly before the pandemic, made one of the first stops in their inaugural concert tour as a married couple at Akron’s E.J. Thomas Hall. Joined by pianist Peter Dugan, the pair presented “Voice and the Violin,” a variety of short selections that highlighted both their personal and musical partnership.

Given the theme of the evening, it seemed fitting to open the concert in the Romantic era with Mendelssohn’s “Ah, ritorna, età dell’oro” (Cavatina) from Infelice. Bell’s and Martinez’s musical sensibilities were evenly matched, the soprano’s delicate voice fitting well with the violinist’s effortless playing.

Bell is no stranger to performing operatic arias on his instrument, having devoted an entire album to the subject in 2006’s Voice of the Violin. But he and Martinez had to do some digging to find works written for their specific instrumentation. These were presented together with arrangements and solo pieces, which filled out the program quite naturally. One such arrangement was Fritz Kreisler’s version of Rachmaninoff’s O Cease Thy Singing, Maiden Fair, Op. 4, No. 4, a soulful work that provided a welcome contrast to the mostly lighthearted fare.

At around fifteen minutes, Schubert’s Sonatina No. 1 in d, Op. 137 was the longest piece on the program, but it felt just as concise as the others thanks to Bell’s warm tone and graceful way of playing. Martinez followed that up with more Schubert — An die Musik, a short and sweet “love letter to music itself” that played to her strengths, focusing on vocal timbre rather than power.

Later came a pairing of works by Puccini: Bell and Dugan with the violinist’s recently updated arrangement of “O mio babbino caro” from Gianni Schicchi, and all three performers with “Quando m’en vo” (Musetta’s Waltz) from La bohème. The former was a tasteful rendition of the well-loved melody, while the latter was captivating and passionate, the musicians all appearing to especially enjoy the performance. Though the married couple mostly commanded the spotlight, Dugan deserves some extra kudos for accompanying all eleven pieces, consistently capturing the character and style of each one.

Bell, in turn, replaced his planned Introduction et Tarantelle, Op. 43 by Sarasate with Wieniawski’s Scherzo-Tarentelle, Op. 16, a showpiece of pure technical prowess and high-flying harmonics that emphasized his soloistic talent.

Before the closing West Side Story Suite (arr. Brohn/Czarnecki from Bernstein), Martinez wowed with a piece of true Puerto Rican origin — Narciso Figueroa’s lush and pastoral Mi Rancho. And although a lack of projection held her back in some of the Bernstein’s most energetic sections, her beautiful, emotive rendition of “Somewhere” made for a stunning sendoff.