Composed in Warsaw in 1943, the Overture is surprisingly optimistic, almost triumphant. There is a march driving along the streets of the city, but it does not sound weighed down by fear of the occupying military. Nor, however, does it signal victory, or any imminent success on the part of resistance. Instead, it embodies the gratitude of continuing to live — without sentimentality.

Reinhardt led the orchestra with this philosophy in mind. With the help of projector screens on either side of the stage, the audience was able to see the energy the conductor extracted from the score as the music swelled in the pavilion. 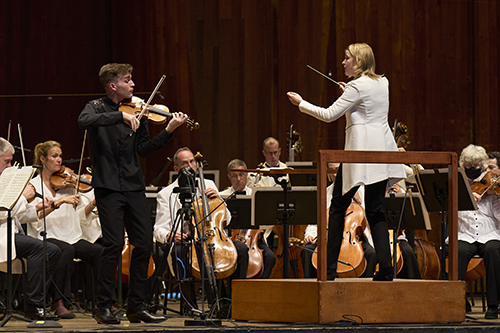 Taking his spot next to the podium, Kenney jumped into the Mendelssohn. His sound was clear and projected confidence. His vision held close to Romanticism without getting stuck in the mud of complicated feelings — crystalized and sparkling.

Ushered in by a gentle bassoon solo, the orchestra rolled into the Andante with disarming sensitivity. It was a wonderful moment. Throughout the Mozartian finale, the ensemble gave Kenney an elegant tapestry upon which he could imprint his own character, all the way to the soaring conclusion.

Bringing the audience back to earth was Dvořák’s pastoral Fifth Symphony. The Allegro ma non troppo bristled with rustic intensity like a large, untouched forest. It was fitting that Reinhardt and the orchestra performed it for an audience sitting on a hill in the middle of the woods and the birds nesting in the eaves. 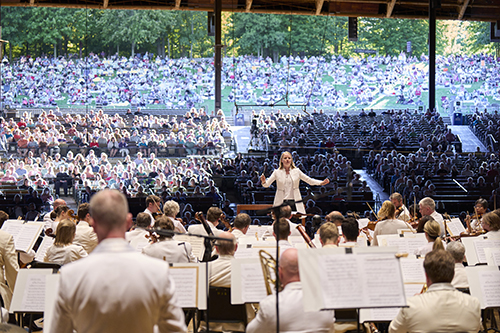 The woodwinds and brass played beautifully throughout, and the cellos had a wonderful moment opening the Andante con moto, inviting along the violins and the oboe. The dark, roiling beginning to the Finale — living in the bass and cello — erupted in brightness, the theme rising on the violin. The spirits embodied in the rest of the orchestra seemed to emerge from the trees, catching and passing around the theme as if it were a chalice.