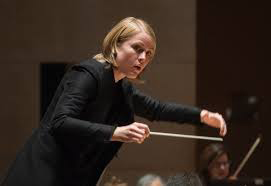 What led Ruth Reinhardt to conducting? “It was by accident,” Reinhardt said during a recent telephone conversation from Switzerland.  “The conductor of my youth orchestra asked if one of us wanted to conduct. I was packing up and I just raised my hand — I don’t know why — I thought it might come in handy at some point.”

Indeed, conducting has come in handy for her. On Saturday, July 30 at 7:00 pm at Blossom Music Center, Reinhardt will return to the Cleveland Orchestra podium to lead a program featuring Grażyna Bacewicz’s Overture, Mendelssohn’s Violin Concerto with soloist Alexi Kenney replacing Sergey Khachatryan, who has withdrawn due to visa complications, and Dvořák’s Symphony No. 5. Click here for tickets and more information.

Mike Telin: Is this your second or third appearance with the Orchestra?

Ruth Reinhardt: This will be my third appearance. The first two were family concerts and the last time was actually funny because it was a Halloween concert and the entire orchestra was dressed up in costumes — it was out of this world.

So this will be my first time at Blossom and I’m looking forward to it so much because Cleveland is an amazing orchestra.

MT: Have you worked with Sergey Khachatryan ?

RR: I have never worked with him but I’ve heard such great things about him that I’m sure it will be great.

MT: The Mendelssohn is so fun — why do you think it’s so popular?

RR: It’s just brilliant, so well written and just such beautiful music. It just shows what a great composer Mendelssohn was.

MT: I was not familiar with Polish composer and violinist Grażyna Bacewicz before, but the Overture is a great piece.

RR: I’ve conducted it once before and I’ll do it quite a few times next season. I have conducted other works by her, mostly the Concerto for String Orchestra, which is a fantastic piece.

I think she’s a fantastic composer, but so underrated — and that’s a shame because her music is excellent. Some of it is more like Bartók and some of her later music sounds like Lutosławski. But as you listen to her works more you do hear that she has her own voice. I’m excited to be able to perform her music.

She’s also one of those people who I would have loved to meet because she must have been an amazing woman. I’m excited to be able to perform her music.

MT: Dvořák’s fifth symphony is not played all that often.

RR: I’ve loved Dvořák’s music from an early age. I think all his symphonies are really interesting, even one through four. But with five he has become a mature composer — the earlier ones are more Wagnerian with interesting themes that are not so well developed. No. 5 was written in the mid 1870s and he felt good about it, only to have it rejected by his publisher. He did revise it and eventually it was published, but not for some time.

MT: You said that you liked Dvořák’s music from an early age: what attracted you to it?

RR: I don’t know, but I was in a string quartet from the time I was twelve and we played a movement of one of his quartets, and the more we got into it, I wanted to know who this guy is. So I started reading his biography, then a bit later I looked into the symphonies and then the tone poems.

Then when I was studying in Zürich, the University would organize conducting masterclasses and we would go with our teacher to different cities in the Czech Republic. I fell in love with the culture.

MT: You began studying violin at an early age — was your family musical?

RR: Yes and no. There were no professional musicians in my family, but my parents liked classical music, and played violin as kids. But I wasn’t into just one style of music. I wasn’t one of those kids who said okay, I’m just going to play the violin and that’s it.

I sang in the Children’s chorus at the Saarbrücken opera house, which was cool because we got to be in everything where kids were needed — like Othello or Carmen. I played in chamber music groups, youth orchestra, and a youth ensemble for contemporary music. And I started composing. 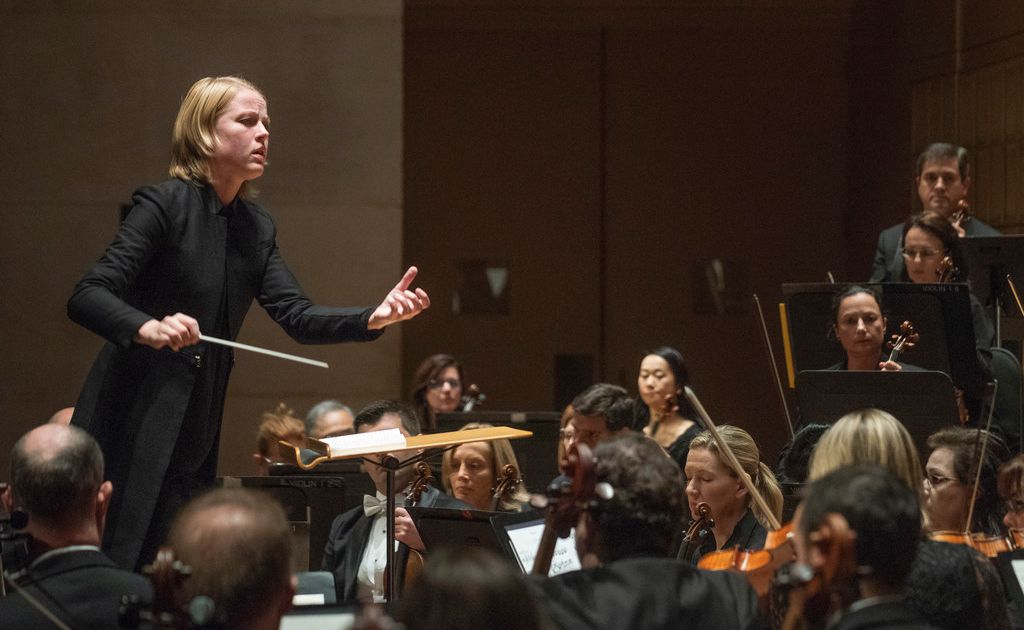 Reinhardt with the Dallas Symphony.

MT: When did you realize that conducting was what you wanted to do?

RR: I realized right away that conducting was what I was looking for. It combines so many different aspects of music making, especially the analytical part of composition and theory, which you don’t really have to do so much when you are a young violinist..

Then there is the chamber music aspect. As a kid in the quartet everybody would say something and it was all valid, but if you ended up using everyone’s suggestions, it wouldn’t make sense anymore because you do need to agree on one general interpretation.

MT: What road led you to Juilliard to study with Alan Gilbert?

RR: I studied violin and conducting in Zürich. It was a good school and I could have stayed there but I wanted to get a new [perspective] on things. So I was looking round and ended up having a masterclass with another teacher at Juilliard, James Ross. He and Alan are really good friends. I liked his style of teaching and that encouraged me to apply.

At that time I didn’t know Alan, but now I would say that he was the best teacher I could ever have had. He was just perfect for me at that time. He was demanding and expected us to learn a lot of repertoire — not to just get through it, but to make music out of it.

He was extremely challenging, but at the same time super supportive. He gave us responsibilities like taking the first rehearsals for incoming conductors. He knew we could do it, but we had to do it well. He challenged me, but I knew that he always believed in me.

Also as a conductor you have to be yourself — the moment you’re not, everybody can tell. And he encouraged each one of us to work on our strengths, and of course our weaknesses, but he never tried to put us into a box.

MT: Earlier you mentioned Grażyna Bacewicz’s Concerto for Strings — I saw a video of you conducting the piece with the Frankfurt Radio Symphony during the beginning of the pandemic. What did it feel like having everybody spread so far apart?

RR: That was my first time doing that and it was strange because I had just conducted that orchestra, I think for New Year’s, and it was super fun. They were so energetic. Then suddenly it was a small orchestra, spread far apart with cameras everywhere. There was no audience so the hall was very boomy and it was difficult to hear. We were all thinking, what’s going on? It was a big adjustment, but one that everybody had to go through. I think that we did figure it out.

I much prefer the normal setting but I wanted to do it because I love music. But it was like running a race with somebody throwing sticks in between your legs.

Jackson began the program with a recitation of Langston Hughes’ poem “Helen Keller” — the first of five poems by Hughes that served as interludes between each piece on the first half. END_OF_DOCUMENT_TOKEN_TO_BE_REPLACED

Pianos with pins and tape on strings, a bass drum and tam tam, crotales, Almglocken, and vibes. Microphones were hooked up all around the instruments. The feed was sent to speakers around the room. Lighting designer Nicholas Houfek hung incandescent globes over the arrangement of instruments from thin black wires stretching across the beams. END_OF_DOCUMENT_TOKEN_TO_BE_REPLACED

From the podium, Elim Chan set an ambitious tone for the evening. The rising star conductor, here in her Cleveland Orchestra debut, has a commanding style, and every twist and turn in Saturday’s performance tracked closely with her baton. END_OF_DOCUMENT_TOKEN_TO_BE_REPLACED