The first Cleveland Orchestra concert at the Blossom Music Center occurred on July 19, 1968. On Saturday evening’s concert there was no official recognition of that 50th anniversary, but the event did mark another tradition in existence since 1990: a “side-by-side” performance in which members of the Kent Blossom Chamber Orchestra were interspersed with The Cleveland Orchestra.

This annual event marks the important role that musical education has played in Blossom’s history and development. Advanced students at the Kent Blossom Music Festival are mentored by Orchestra musicians as they prepare for professional careers. Both The Cleveland Orchestra and the Kent Blossom Chamber Orchestra played their own selections on the concert and combined for two works. The concert was something of a marathon, beginning at 7:00 pm and ending just before 10:00 pm, with two intermissions.

Cleveland Orchestra assistant conductor Vinay Parameswaran led the student ensemble in two classics, both composed in 1916-17: Sergei Prokofiev’s Classical Symphony, and the first suite from Manuel De Falla’s The Three-Cornered Hat. Both performances shared lucid textures, flexible phrasing, and a clear sense of musical line. The Prokofiev, an homage to the symphonies of Haydn, had more rounded edges and fewer biting accents than usual –– especially in the third movement Gavotte. 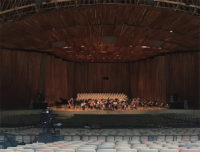 Falla’s ten-minute, four-movement ballet suite is infused with the composer’s native Spanish musical color and rhythms. After a short fanfare, languid music suitable for a hot summer afternoon is followed by a rousing Fandango with alternating triple and duple meters. A scene between the principal characters of the Miller, his wife, and the magistrate was playful, before a return to the dance at the end of the suite. Numerous incidental solos were expertly played by the Chamber Orchestra principals. For an ensemble that does not perform together regularly, performances of both works were highly satisfying.

The second part of the concert, the side-by-side, conducted by Jahja Ling, was devoted to Hector Berlioz’s overture Benvenuto Cellini and Ralph Vaughan Williams’s sumptuous Serenade to Music.

The Berlioz overture represents characters and musical themes that appear in the composer’s 1838 opera about the adventures of a 16th-century Florentine goldsmith, including tangles with his patron, Pope Clement VII. A pizzicato bass theme representing the Pope is followed by a soaring violin melody over woodwind arpeggios. The busyness of the music increases to a climax, coming to a sudden grand pause, after which a cello solo again reprises the Pope’s theme before a brief final coda. Berlioz would likely have been thrilled by the sheer quantity of sound produced.

Serenade to Music shows Vaughan Williams at his most sublimely lyrical in his sensitive setting of words from Shakespeare’s Merchant of Venice, beginning with “How sweet the moonlight sleeps upon this bank!” and ending with “Soft stillness and the night become the touches of sweet harmony.” The Serenade was composed in 1938 as a tribute to Henry Wood on his 50th anniversary as a conductor, and featured sixteen solo singers, all of whom had a close association with Wood. Each was given a solo phrase or two and all combined as a chorus for climactic passages.

Vaughan Williams later authorized the Serenade to be performed by full chorus, the version heard in this performance. The sheer beauty of sound and line from orchestra and chorus were the highlight of this concert. As prepared by director Lisa Wong, the Blossom Festival Chorus sang with superbly refined and pure sound, matching vowels and consonant releases in the soaring musical phrases. The solos were taken by groups from within the ensemble. Concertmaster Peter Otto played the important violin obbligato with a sensuous, gorgeous line.

After a second intermission, The Cleveland Orchestra returned for Gustav Mahler’s Symphony No. 1. As in other Mahler works, the composer recycled previous compositions, in this case tunes from his Songs of a Wayfarer. There is a childlike, folksong quality to many parts of the symphony. The children’s song Frère Jacques appears comically in a minor key as the satirical theme of the third-movement funeral march, along with music evocative of Eastern European Klezmer.

There were many fine moments along the way — the rapt silence of the opening of the first movement depicting dawn, the second movement’s folk-like Ländler dance, and the blaze of brass at the symphony’s end. Although filled with beautiful and admirable details, under Ling’s direction, this performance never caught fire. Individual moments were often thrilling, but this time they didn’t add up to a completely satisfactory musical whole.

Jahja Ling photo from the 2017 Side-by-Side concert by Roger Mastroianni.

Franz Schmidt’s Symphony No. 4 showcased the ensemble, under guest conductor Jonathan Berman, in the standard conventions of a not-so-standard piece. But at the start of the program, the musicians were equal partners to pianist Cédric Tiberghien, whose playing could be as bold as the full orchestra or as intimate as any instrumental solo. END_OF_DOCUMENT_TOKEN_TO_BE_REPLACED

END_OF_DOCUMENT_TOKEN_TO_BE_REPLACED

Jackson began the program with a recitation of Langston Hughes’ poem “Helen Keller” — the first of five poems by Hughes that served as interludes between each piece on the first half. END_OF_DOCUMENT_TOKEN_TO_BE_REPLACED

Pianos with pins and tape on strings, a bass drum and tam tam, crotales, Almglocken, and vibes. Microphones were hooked up all around the instruments. The feed was sent to speakers around the room. Lighting designer Nicholas Houfek hung incandescent globes over the arrangement of instruments from thin black wires stretching across the beams. END_OF_DOCUMENT_TOKEN_TO_BE_REPLACED

From the podium, Elim Chan set an ambitious tone for the evening. The rising star conductor, here in her Cleveland Orchestra debut, has a commanding style, and every twist and turn in Saturday’s performance tracked closely with her baton. END_OF_DOCUMENT_TOKEN_TO_BE_REPLACED