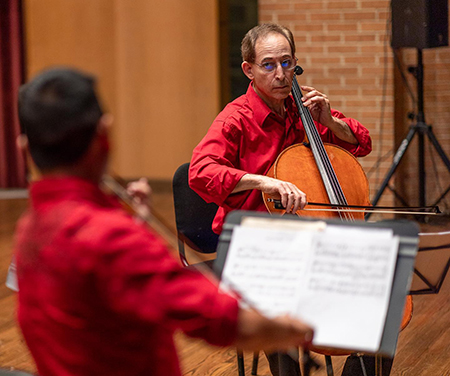 The evening began with the Handel/Halvorsen Passacaglia, performed by cellist Richard Weiss and violinist Yun-Ting Lee. Throughout, the musicians maintained the graceful playfulness of the fast-paced, energetic piece, using expertly shaped phrases to create a clear narrative. 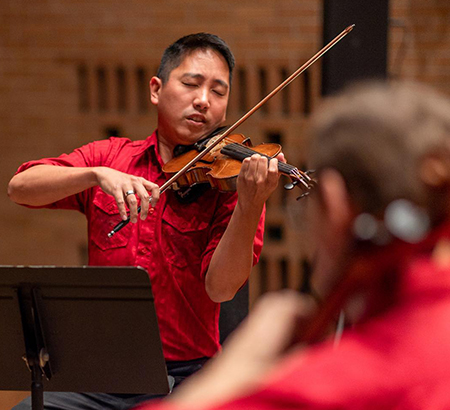 Weiss and Lee engaged in an intriguing, intricate dialogue, passing lively melodies back and forth and responding to each other’s shifts in dynamics and emphasis. Completely in sync, they traveled through highly virtuosic material, making the final cadence satisfyingly triumphant.

Though she normally serves as principal keyboard of The Cleveland Orchestra, Joela Jones took up the accordion as she joined Weiss, Lee, and bassist Maximilian Dimoff in an arrangement of “Nessun Dorma” from Puccini’s Turandot.

The accordion’s bright, forward tone added a layer of brilliance to the rich hues of the other instruments, creating a unique collective sound. At other times, its timbre became surprisingly tender and gentle, appropriate for the emotional material. Weiss and Lee handled the melodies beautifully, soaring over the foundation laid by Jones and Dimoff and playing with subtle but impactful gestures such as slight ritardandos before climactic moments.

Puccini was followed by Mátyás Seiber’s Introduction and Allegro for cello and accordion. Once again, the accordion added a new depth to the cello’s full-bodied timbre, as the music shifted from light, atmospheric melodies to more dissonant, urgent material. 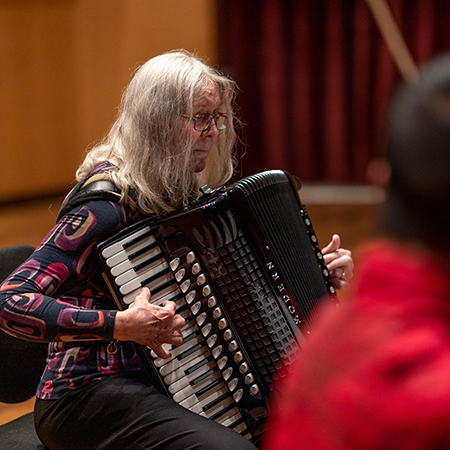 In three pieces by Morricone, Weiss and Jones took the audience on a storytelling journey that began in a place of intensity and longing in Cinema Paradiso, where Weiss’s tactful use of vibrato helped to emphasize moments of high drama. Moving to Gabriel’s Oboe from the more hopeful material of The Mission, the duo finally found closure in music that conveyed triumph and satisfaction. 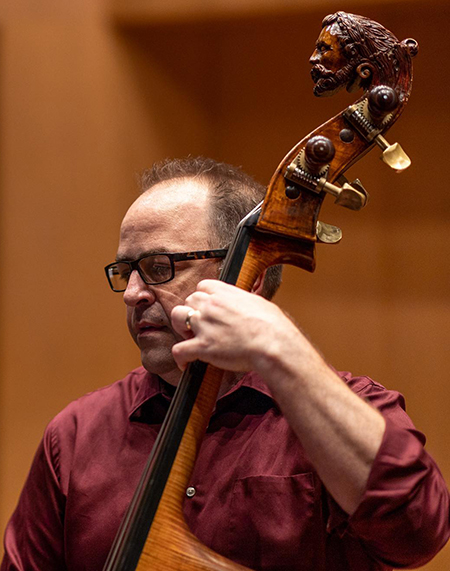 The quartet came back together for four pieces by Piazzolla. In Milonga del Angel, Dimoff’s bass sound was subtle but very effective in driving the piece forward with tango rhythms, as the other instruments set down layers of rich harmonics. In Tanti Anni Prima, the collective sound was low and full, complete with indulgent glissandos on the cello. After the complex, dissonant Oblivion, the quartet concluded with the dynamic, decadent Libertango.

In the Allegro and the Andante, the ensemble’s sound featured graceful and effortless melodies, lively counterpoint with a consistent momentum, and phrases that began gently, with a warm tone. In the Menuetto, the individual melodies were strong and clear, making for a delightfully intricate canon filled with rich harmonies. Without a hint of friction, the final movement moved from anxious intensity to sweetness, ending on an exuberant cadence. 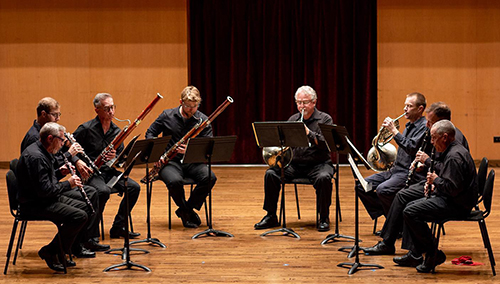 END_OF_DOCUMENT_TOKEN_TO_BE_REPLACED

Rodgers & Hammerstein’s Cinderella was originally produced for television in 1957 — seven years after the animated Disney film was released — and starred Julie Andrews. According to the Rodgers & Hammerstein website, it was viewed by over 100 million people. END_OF_DOCUMENT_TOKEN_TO_BE_REPLACED

The story line has its origin in an 1855 play and an 1842 farce that Thornton Wilder mined for his 1938 play The Merchant of Yonkers. When that turned out to be a flop, in 1954 Wilder made the crucial decision to re-center the show around the character of the legendary marriage broker Dolly Gallagher Levi and renamed it The Matchmaker. END_OF_DOCUMENT_TOKEN_TO_BE_REPLACED

The Dodero Center for the Performing Arts at the Gilmore Academy in Gates Mills is one feature of an impressive campus. The auditorium is shallow, the stage is deep, and the ensemble played without a shell. Throughout the program, the sound, especially in instruments’ lower registers, tended to disappear. END_OF_DOCUMENT_TOKEN_TO_BE_REPLACED