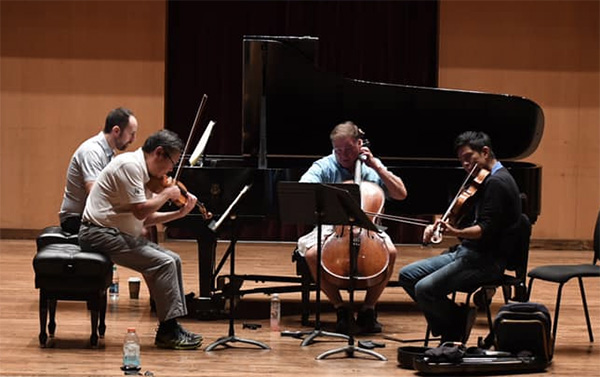 The Miami String Quartet brought a traditional approach to works by Haydn, Beethoven, and Bruch during their performance on July 10 as part of Kent Blossom Music Festival’s Faculty Concert Series. The group delivered their old-school sound with exuberance, and welcomed acclaimed pianist Spencer Myer to shine in the Beethoven.

Haydn was hard at work on his oratorio The Creation when he composed the Op. 76 string quartets from 1796-98, and they showcase some of the composer’s inventive genius from this fertile period. The Miami played the String Quartet in D (“Largo”), an intricate piece that often defies expectations with its unusual structure and embedded musical jokes. They played energetically, digging deep into the music and extracting meaningful phrases.

The Quartet’s balance verged on top-heavy. First violinist Benny Kim played out over violinist Cathy Meng Robinson, violist Scott Lee, and cellist Keith Robinson, a sound from a bygone era of quartet playing that generates a host of intonation questions — is the chord merely lopsided, or is it out of tune? There were a few clunkers, but the Quartet’s enthusiasm overrode any technical issues. Their sense of time was quite refined — entrances wove together seamlessly, and cut-offs were picture-perfect.

Myer joined the Miami for a rousing performance of Beethoven’s Quartet for Piano and Strings in E-Flat, Op. 16. Beethoven arranged the piece from his own Quintet for Piano and Winds with the same key, tempos, and opus number, but the work loses a few elements in translation. The colorful palette of woodwind articulations lends a lively, puckish interplay between voices that is hard to replicate with strings, and the gnarly piano part is much more exposed in the threadbare texture of the transcription. Thankfully, we had Myer at the keyboard, who attended to ensemble blend with care, even in the trickiest sections. Lee played with a rich-hued, technicolor tone, and his solos were intoxicating.

The evening concluded with Bruch’s String Quartet No. 1, an early, lesser-known work that the Miami fully brought to life. They passed melodies around with a clear sense of direction, expanding and contracting within the confines of the beat and staying exactly together. Intonation issues continued to surface here and there, but their playing kept up a high level of finesse, particularly in their immaculate cutoffs. They played sensitively during the “Adagio,” where you can hear glimmers of the beautiful slow-movement writing that Bruch would later fully embrace. The finale, “Molto vivace,” is a tarantella, and all four musicians tore into the frenzied music with lighthearted humor, giving the composer’s youthful composition a mature interpretation.

Photo from a rehearsal in Ludwig Recital Hall.

Jackson began the program with a recitation of Langston Hughes’ poem “Helen Keller” — the first of five poems by Hughes that served as interludes between each piece on the first half. END_OF_DOCUMENT_TOKEN_TO_BE_REPLACED

Pianos with pins and tape on strings, a bass drum and tam tam, crotales, Almglocken, and vibes. Microphones were hooked up all around the instruments. The feed was sent to speakers around the room. Lighting designer Nicholas Houfek hung incandescent globes over the arrangement of instruments from thin black wires stretching across the beams. END_OF_DOCUMENT_TOKEN_TO_BE_REPLACED

From the podium, Elim Chan set an ambitious tone for the evening. The rising star conductor, here in her Cleveland Orchestra debut, has a commanding style, and every twist and turn in Saturday’s performance tracked closely with her baton. END_OF_DOCUMENT_TOKEN_TO_BE_REPLACED