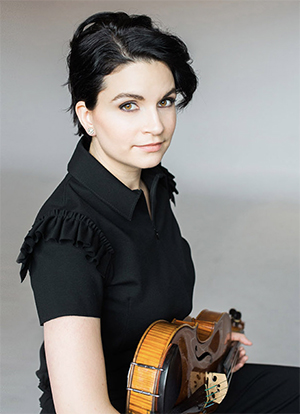 Canadian violist Marina Thibeault, who will play a solo recital on the Lorain County Community College Signature Series on Monday, March 4 at 7:30 pm, switched from violin to viola early on. “There weren’t that many violists in Quebec City when I was growing up. I heard a concert that included both Brahms sonatas when I was 15 and if I had known earlier that such an amazing sound existed, I probably would never have played the violin,” she said in a recent telephone conversation from her home in Montreal.

“I immediately asked to study both instruments, but my violin teacher at the time denied my request. As a fiery 15-year old, I decided to switch entirely to viola right away, and have never played violin since.”

While the decision to change instruments might seem to have freed her from having to deal with two different clefs (viola music is notated in alto clef, the violin in treble), Thibeault’s interest in new music took care of that. “Contemporary repertoire is more challenging now and the viola is reaching into a higher stratosphere than it used to, so there’s still quite a lot of treble clef involved.”

What drew her to contemporary music? “As a violinist I would blast the Stravinsky concerto in my car on the way to school, so I was always drawn to that newer sound. It was not a foreign language for me,” she said. “I commissioned my first piece at the age of 17 from a Czech-Canadian composer who was working for CBC Radio, and played the premiere in Prague.

The selections on Marina Thibeault’s March 4 program reach back as far as 1938 with Elisabeth Lutyens’ Sonata, Op. 5, No. 4. “It wasn’t easy for women to be composers at the time. Even Rebecca Clarke, one of the most prolific English composers, who had written under a male pseudonym, decided in her 50s to marry and quit her career. There’s not much repertoire from that era because of the social difficulties.” 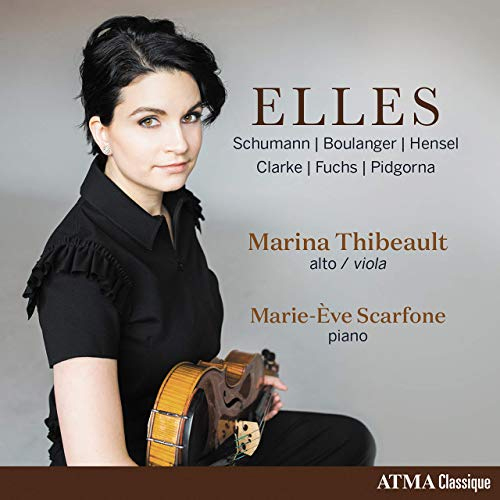 Two of the works on the program also appear on Thibeault’s new album, ELLES, which is entirely dedicated to female composers. “Anna Pidgorna’s The Child, Bringer of Light (2012) is by a Canadian-Ukrainian composer currently doing her PhD at Princeton. I met her at a showcase in Toronto when I was expecting my first child, and I programmed the piece on my first recital after giving birth, and again after my second child. So the title is quite fitting in my life!

“It’s a wonderful piece that takes you on a journey through all the emotions and honors Carl Jung’s archetypes. Just because you’re a child doesn’t mean that you don’t feel true, deep, and passionate emotions. Now that I have a two-year-old who’s throwing tantrums, I have quite a lot of my own material to base my interpretation on.”

Thibeault describes Lillian Fuchs’ Sonata, the other piece that appears on ELLES, as the most tonal piece on her LCCC program. “A violist herself, she knows very well how to write for the instrument. Her Bach Suites on vinyl are really amazing.”

The violist has also programmed two works by Jeffrey Mumford, curator of the Signature Series, and one by Mumford’s mentor, Elliott Carter. “wending is the first piece of Jeffrey’s that I ever heard. There are a lot of details in his music, but it’s also so meditative and contemplative. …becoming clear is virtuosic with a lot of tempest in it, but it also has a wonderful slow section. Jeffrey’s writing is so mysterious, and it fits well with the smoky, earthy sound of the viola. I think he really understands the colors of the instrument.”

Thibeault said that Elliott Carter’s Figment 4 is connected to Mumford’s music in its fascination with detail, “but Carter has more outbursts and a buildup of anger.” She admits that she prefers the Mumford. “It’s gratifying when the apprentice surpasses the master.”

In addition to her solo career and her role as a mother of two small children, Marina Thibeault is coordinator of chamber music at Domaine Forget, where she teaches viola in addition to her administrative duties. “I want to make more room in my schedule for teaching. I find that the more I teach the better I play. Sharing music onstage and through albums and chamber music is wonderful, but passing down knowledge to the next generation is one of the purest ways to share music. I really cherish that.”

The violist is also in the second year of a three-year doctoral program at McGill University, where she’s keen on making her research relevant to her performing. “I didn’t just want to put my viola in the closet and study. This album and the concert I’ll be playing are really at the core of my doctoral studies. I’ve made many, many beautiful discoveries through studying the influence of women as composers and performers, and I’m also looking at educators such as Nadia Boulanger. There’s so much to learn, and I’m making great discoveries.

One of Thibeault’s new colleagues at McGill is well-known to Clevelanders. “We never met at Curtis, but Jinjoo Cho is a terrific player, full of energy. And she’s sending me violin students to convert to the viola.” Ending our conversation, I suggested to Marina Thibeault that someone should devise a ceremony to mark those violin to viola conversions. “That’s a really great idea — I would like that!”

END_OF_DOCUMENT_TOKEN_TO_BE_REPLACED

Rodgers & Hammerstein’s Cinderella was originally produced for television in 1957 — seven years after the animated Disney film was released — and starred Julie Andrews. According to the Rodgers & Hammerstein website, it was viewed by over 100 million people. END_OF_DOCUMENT_TOKEN_TO_BE_REPLACED

The story line has its origin in an 1855 play and an 1842 farce that Thornton Wilder mined for his 1938 play The Merchant of Yonkers. When that turned out to be a flop, in 1954 Wilder made the crucial decision to re-center the show around the character of the legendary marriage broker Dolly Gallagher Levi and renamed it The Matchmaker. END_OF_DOCUMENT_TOKEN_TO_BE_REPLACED

The Dodero Center for the Performing Arts at the Gilmore Academy in Gates Mills is one feature of an impressive campus. The auditorium is shallow, the stage is deep, and the ensemble played without a shell. Throughout the program, the sound, especially in instruments’ lower registers, tended to disappear. END_OF_DOCUMENT_TOKEN_TO_BE_REPLACED