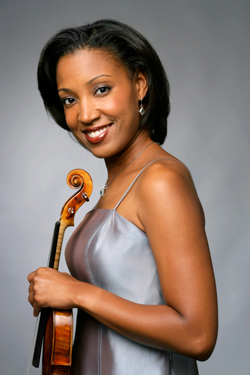 Kelly Hall-Tompkins’s recent recital at Lorain County Community College began, as she said, with the miniature and proceeded to the giant. The excellent New York-based violinist, with pianist Craig Ketter, moved from modernist character pieces by Sergei Prokofiev and Jeffrey Mumford to the full-blown Romanticism of Richard Strauss. Versatile and expressive, Hall-Tompkins and Ketter gave the smaller works a dignity belied by their short duration, and brought a welcome variety to the much longer and distinctly pre-modern Strauss.

Prokofiev’s Five Melodies, which opened the recital, were written in 1920 as vocalises and five years later revised by the composer for violin and piano, their relatively straightforward melodic lines now enhanced by a full repertory of violinistic techniques. Playing without score, Hall-Tompkins gave each miniature a distinct personality. The set as a whole amply reminded us of Prokofiev’s ability to contrast expressivity with playfulness and to switch gears swiftly and without fuss.

The Prokofiev pieces were followed by two miniatures from 1993 by LCCC professor and series curator Jeffrey Mumford. These elegant little pieces created a telling contrast between their jagged piano lines, full of syncopations and suspensions, and the more lyrical violin part.

Summerland, another miniature, is a jazz ballad from 1936 by American composer William Grant Still. Less than four minutes long, in Hall-Tompkins’s hands it seemed the emotional heart of the recital, with a lingering, improvisatory melody and warm double stops.

Two show tunes closed the first half of the recital, first the violinist’s smoky and heartfelt version of Pure Imagination, the ballad sung by Gene Wilder in the 1971 film Willy Wonka and the Chocolate Factory. Her charming, jazz-inflected arrangement can be heard on YouTube — paired, as part of her “Imagination Project,” with a dazzling version of the Solo Sonata No. 6 by Belgian composer Eugène Ysaÿe.

The second tune derived from another 1971 movie, Fiddler on the Roof, in which the great violinist Isaac Stern played the fiddle music off-camera. Here Hall-Tompkins reprised his arrangement, beginning with an extended cadenza and moving on into a compilation of virtuoso violinistic techniques. Hall-Tompkins, who is currently the pit violinist for the Broadway revival of Fiddler, noted with relief that she does not need to imitate Chagall’s flying fiddler, seventy feet above the stage.

After the break, Hall-Tompkins, who punctuated the program with engaging and improvisatory program notes, said there were to be no more miniatures. The only piece on the second half was Richard Strauss’s ambitious Sonata, Op. 18. Some thirty minutes long, this youthful piece — Strauss was in his early twenties when he wrote it — shows the continuing influence of Brahms, both in its lyricism and in its adherence to the conservative sonata form.

Making extreme demands on each performer — a sort of concerto for both instruments — the sonata is passionate throughout and, at times, fiery. Both Hall-Tompkins and Ketter delivered the appropriate fireworks with secure technique and an infectious sense of pleasure in jumping through whatever daunting hoops the young composer could invent. Even with such a strong performance, however, the sonata seems to have been a dead end for Strauss, a last gasp of abstract formalism. Fortunately, Strauss would soon acknowledge the previously-resisted temptations of Wagnerism, and find his own greatness in the more programmatic vein of song, opera, and tone poem.

Though the audience was light in number, it was heartening to be at a classical concert where the majority of the listeners were no older than Richard Strauss when he wrote the sonata. Educationally and musically, the recital marked yet another success in Mumford’s stimulating series at LCCC.

Though it had amassed a vast trove of audio over the decades, The Cleveland Orchestra has come late to the game in the video department. Even so, the organization wasn’t about to rush to produce the equivalent of home movies to keep its patrons engaged while live events were on hold. END_OF_DOCUMENT_TOKEN_TO_BE_REPLACED

END_OF_DOCUMENT_TOKEN_TO_BE_REPLACED

Although it wasn’t the original plan to go online last weekend for the final round of the James Stroud Classical Guitar Competition, moving to a digital format suited the event well. Young performers Aytahn Benavi, Patricia Hernandez, Ian Tubbs, and Eric Wang played in the intimate setting of their own homes, giving everyone who tuned in a front row seat. END_OF_DOCUMENT_TOKEN_TO_BE_REPLACED