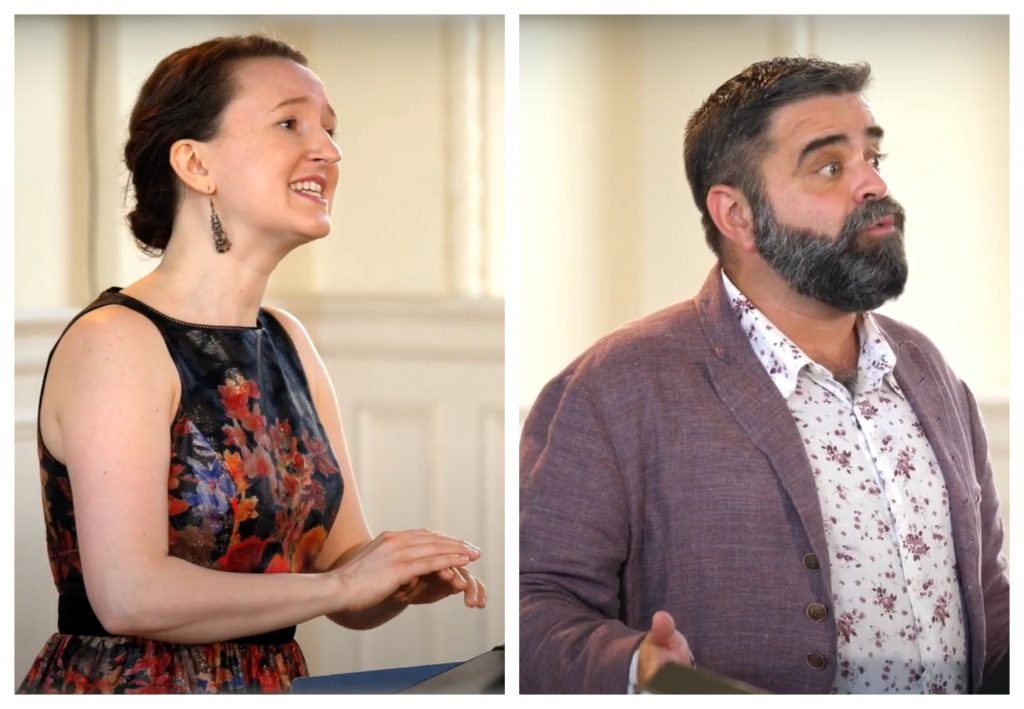 I reached Les Délices director Debra Nagy by telephone to discuss all of that, beginning where else but with Aesop’s Fables. Those got us talking about childhood, specifically Nagy’s upbringing as a first-generation American.

“I grew up with British parents,” Nagy said. “My dad was a little bit older, so when it came to children’s literature, he read us Rudyard Kipling and Robert Louis Stevenson — the kind of things that symbolized childhood for him, but childhood as a Londoner in the ‘40s and ‘50s.”

Aesop’s Fables also fit right into that cultural realm. So while Nagy can’t quite relate to many cultural phenomena associated with childhood in America, she can relate to fables. “I even remember that one of the first things we did in high-school French class was memorize La cigale et la fourmi, which is The Ant and the Grasshopper,” she said.

But the main reason that fables ended up on this program is circumstance. They were originally intended to be included as divertissements in a theatrical project called The White Cat, initially scheduled to be premiered in April of 2020. Of course, COVID-19 intervened, as it would again with the rescheduled date in September. (Les Délices is now eyeing a premiere in the spring of 2022.)

After that second postponement, Nagy decided to arrange an audio recording session to read through the whole score for the first time, and to have for the archives. Another half-day session of video recording focused on the four fables we’ll hear on Thursday, as well as a few scenes and interviews.

The theme of “making lemonade out of lemons”— something Nagy said the ensemble has been doing all year — continued with the ground-bass variations, which she originally had in mind for a different program that would have also been called “Games and Grounds.” That one would have involved a play on words around the French la gamme, meaning a musical scale. “So I repurposed the idea of games as musical entertainments,” Nagy said. Plus, a few of Thursday’s selections come from a tour program called “Characters of the Dance” which Les Délices recorded last fall for distribution.

Bringing together excerpts from those different sessions involved getting into minutiae that can be both frustrating and kind of funny. One was the weather, meaning the lighting. “The main recording day for the grounds part of this program was three weeks later than the White Cat sessions,” Nagy said. “It was one of those days where storm clouds are moving in and out, so it could look like 7 pm when it’s actually 3 in the afternoon — and then it could be brilliantly sunny fifteen minutes later.”

Second was the matter of fashion: Nagy had to ask everyone to “please wear the same clothing” they had weeks earlier. Watch carefully, she said, laughing, and you’ll notice that violinist Julie Andrijeski’s hair changes between some recordings. “It’s not interesting, but this is the world we’re living in.”

Providing a few extra dimensions to the program are Rameau’s “Pantomime” (arranged by Nagy) from the opera Pigmalion, and Rebel’s Caractères de la danse. Both works carry on the theme of narrative, but unlike the fables, without using text. But as pieces that are “extensive and have their own arc, rather than being episodic,” they also add variation to the rhythm of the program and the experience for an audience. “They bring a different sort of emotional investment,” Nagy said. In contrast, the fables interspersed throughout are relatively short.

On that topic, someday Nagy hopes to build a program even more thoroughly around fables. “It would pair them with all sorts of animal-inspired music — a reflection of the natural world in music and storytelling.”

But back to the present-day, as the pandemic continues to restrict what an ensemble can do, it’s all about circumstance: in this case, creating “a light and pleasure-filled program from the high-quality material we had at hand.”

Franz Schmidt’s Symphony No. 4 showcased the ensemble, under guest conductor Jonathan Berman, in the standard conventions of a not-so-standard piece. But at the start of the program, the musicians were equal partners to pianist Cédric Tiberghien, whose playing could be as bold as the full orchestra or as intimate as any instrumental solo. END_OF_DOCUMENT_TOKEN_TO_BE_REPLACED

END_OF_DOCUMENT_TOKEN_TO_BE_REPLACED

Jackson began the program with a recitation of Langston Hughes’ poem “Helen Keller” — the first of five poems by Hughes that served as interludes between each piece on the first half. END_OF_DOCUMENT_TOKEN_TO_BE_REPLACED

Pianos with pins and tape on strings, a bass drum and tam tam, crotales, Almglocken, and vibes. Microphones were hooked up all around the instruments. The feed was sent to speakers around the room. Lighting designer Nicholas Houfek hung incandescent globes over the arrangement of instruments from thin black wires stretching across the beams. END_OF_DOCUMENT_TOKEN_TO_BE_REPLACED

From the podium, Elim Chan set an ambitious tone for the evening. The rising star conductor, here in her Cleveland Orchestra debut, has a commanding style, and every twist and turn in Saturday’s performance tracked closely with her baton. END_OF_DOCUMENT_TOKEN_TO_BE_REPLACED