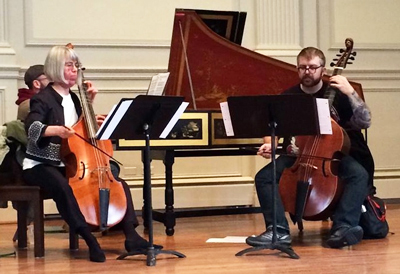 The provocative title of Les Délices’ final program of the season alludes to two composers of the seventeenth-century: the “angelic” Marin Marais (read: pleasant and generous) and the “diabolical” Antoine Forqueray (read: self-centered and cantankerous). With all their differences, the angel and the devil can be strangely allied: both men were virtuosos on, and champions of the seven-string viol, the richly expressive bass instrument that characterizes much of early French baroque music.

The pairing of angel and devil gave Debra Nagy, artistic director of Les Délices, an unusual opportunity to bring two viol players together, in this case Boston-based Emily Walhout and Josh Lee from Atlanta (pictured in rehearsal). Though each has a history with Les Délices, it turns out that the two viol players had never played together before these concerts. It was exciting for mere mortals to be present at their encounters, as infernal sparks vied with celestial zephyrs. Despite some fierce chase scenes, no instruments were harmed in the making of the concert.

Lee gleefully took on role of the “devil” by playing the lead in two pieces by Forqueray, accompanied by lesser demons in the form of Walhout and harpsichordist Michael Sponseller. Deep, sternum-rattling tones dominated in the gnarly rondeau La Bellemont, with occasional glimpses of sun as Lee made his way onto the higher strings. The dazzling chaconne La Buisson worked the entire range of the viol in fantastic broken chords and vast sweeps of scale—and ended in a wholly surprising, saucy lick that leapt over three centuries into the age of jazz.

To represent the “angelic” Marais, Walhout took on the principal viol part in a suite of movements assembled from Books 3 and 5 of the composer’s vast output. A meditative Prelude with an improvisatory feel opened the suite, followed by a contrasting Allemande with a jagged and forceful anxiousness. A tender, swingy Courante and a lively Gavotte concluded the suite. It’s clear that while Marais may have been a nicer man than Forqueray, his music was no less moving and accomplished, though perhaps in a less startling mode.

In Marais’ dashing set of variations on the popular tune Les Folies d’Espagne, Walhout and Lee switched off as principals for each variation. The contrast of Walhout’s lithe and balletic articulation and Lee’s powerful energy and full tone gave an extra sense of excitement to these virtuosic fireworks. Watching these splendid players dare each other (“top those thirty-second-note scales!”) was as neck-stretching as watching an extended deuce game at Wimbledon’s center court. 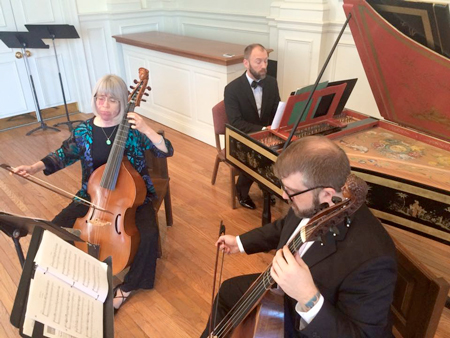 As Nagy’s program notes pointed out, this impressive (and difficult) music for the viol was being written in part because the instrument was fighting for its life in seventeenth-century France. The viol’s traditional status was being threatened by the louder and flashier violin, an Italian innovation. Sometimes, of course, the two played together, and in this program, we heard violinists Ingrid Matthews and Scott Metcalfe joining the two viol players in Jean-Féry Rebel’s Troisième Sonate (subtitled L’Apollon). While at times this seems to be a standard trio sonata—in which the bass part would simply play a continuo role—Rebel lets the viol come into its own in the middle of the piece, as if reminding his audience (and his players?) not to put all their money on the violins.

Bookending the program were two pieces for larger ensembles, featuring parts for the two violinists, joined by two oboists (Nagy and Kathryn Montoya), as well as two bass parts for the two viols, one playing with the harpsichord as continuo and the other taking a more independent part in the texture. The concert opened with François Couperin’s graceful sonata, La Sultanne, a single, through-composed piece that nonetheless achieves considerable variety of timbre, tempo, and affect. It closed with the Sonate a 8 of Marc-Antoine Charpentier, in which an ebb and flow of sound carried us in waves as individual instruments and pairs of instruments rose out of, and receded again into an rich texture of elegant and expressive sound.

This concert marked the end of the sixth season of this Cleveland-based ensemble, which continues to offer varied, well conceived, and musically satisfying programs based on the music of the French baroque. I attended Sunday afternoon’s performance in the Herr Chapel of Plymouth Church UCC near Shaker Square, a beautiful place (spatially and acoustically) to hear baroque music. 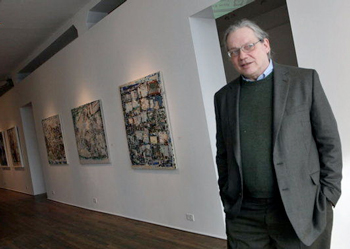 Saturday night’s concert was held in a more intimate venue, the William Busta Gallery on Prospect Avenue. Bill Busta (above), who is leaving the gallery world after 26 years, has been not only a major figure in Cleveland visual arts but also a devoted patron of Les Délices. It’s perhaps our closest equivalent to the sumptuous court venues in which French baroque music was originally heard. I will miss the very special opportunity of listening to the music of Les Délices in the company of vibrant paintings and textiles.

Les Délices has announced its subscription series for 2015-16, offering four programs featuring, among others, arrangements and compositions for two harpsichords (Sponseller, playing with Oberlin emerita professor of harpsichord Lisa Goode Crawford) and the rising young soprano Teresa Wakim, in a program about the myth of Icarus and the dangers (and excitements!) of flying too close to the sun.

Published on ClevelandClassical.com May 1, 2015.