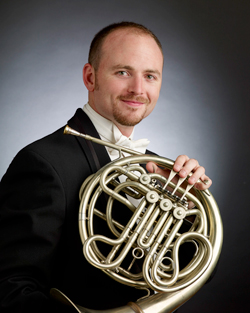 The opening concert of the Cleveland Philharmonic Orchestra season on Sunday, October 11 was an exuberant memorial to long-time Philharmonic music director William Slocum. Maestro Slocum, who conducted the orchestra for twenty-six years, passed away in the spring of 2015.

Referencing Mr. Slocum’s gifts as a horn player, the opening piece in the Philharmonic concert brought the horn to the front of the stage, with Cleveland Orchestra hornist Jesse McCormick taking the solo role in Mozart’s Horn Concerto No. 4 in E-flat, K. 495. McCormick’s graceful playing radiated a calm vitality, full of tender, warm chromaticism. The last movement, a well-known rondo, reminded us of the horn’s origins in the hunt: with its rollicking 6/8 rhythms, we might well have been galloping across the Austrian countryside.

Mozart’s concerto vibrates with joy; a very different kind of energy fills Strauss’s brooding tone poem Death and Transfiguration, Op. 24. In Strauss’s depiction of the anguish of death, a contrasting life-force manifests itself powerfully, surging through the orchestra, and calling on every player onstage — and there were many — to rise to the highest degree of musicianship.

Notable highlights in the Strauss were solos from the harp, violin, oboe, flute, bassoon, and English horn. The strings negotiated fiercely difficult passages with aplomb, and the horns sounded splendidly melancholy. Conductor Victor Liva kept it all together (here, and throughout the concert) with his graceful, sensitive, and clear beat. At the end, we were graced with one of those unforgettable moments where Strauss evokes a timeless other-world, as at the end of Rosenkavalier or in the Four Last Songs.

After intermission, the orchestra gave a splendid performance of Beethoven’s Symphony No. 7 in A, Op. 92. Heroic, assertive, contemplative, demanding — who could imagine a better memorial for a conductor? Even after the exhausting Strauss, the Philharmonic met the challenge of this great, energetic symphony with the moxie and irresistible momentum that it demands. The slow movement, thank heavens, was not too slow, escaping its usual morbidity. The scherzo was crisp and alert (bravo to the horn section!), and the finale (marked con brio) zipped the performance to a close at a spectacular tempo. Special thanks to the timpanist, whose vital stick-work made the whole thing pulse with energy.

In December, the Philharmonic will present Beethoven again (the Triple Concerto), Rachmaninoff’s Symphonic Dances, and (it’s Christmas!) Leroy Anderson’s Sleigh Ride, along with other seasonal music.