It was important to Rogers that the selected composers not only be women, but also living. Additionally, most of them are local or have ties to Ohio. Rogers started her search with the Cleveland Composers Guild. After reaching out to president Frank Wiley, she received numerous submissions from Guild members. “I felt like Scrooge McDuck diving through scores, which was delightful to me,” she said. She continued researching online, both with Google and resources like the Composer Diversity Database.

When Rogers began the programming process months ago, concerns about aerosols led her to mostly choose works with no more than one wind player, so that all the other musicians could be masked. “That really narrowed down the pieces that I could use,” she said. “But I think we did really well in terms of getting a variety of styles.”

The only piece with two wind players is Emma Donkin’s Incandescence for flute, clarinet, and piano, which will be performed on the final concert. Rogers knew that the flutist, George Pope, who had previously performed with Local 4 during the pandemic, had a bag for his instrument that allowed him to play while masked. “So I felt okay doing that,” she said. “And now everybody’s vaccinated, so it’s less of an issue.”

COVID precautions also impacted the process of securing venues, as many chamber recital halls in Cleveland have put a pause on performances by outside groups. After broadening her search, Rogers was eventually able to book space at Lorain County Community College for the first concert and at Pilgrim United Church of Christ for the two others.

Thanks to LCCC’s easy access to equipment, the opening concert involves a “bananas amount of percussion” featured either alone or with other instruments. The composers include Margaret Brouwer, Jennifer Conner, Cara Haxo, and Lauren Spavelko.

The nine pieces to be performed at Pilgrim don’t involve percussion at all. Instead, they include strings, flute, clarinet, piano, and harp, all in groups no larger than four. Among the composers featured is Natsumi Osborn, a 2021 Oberlin College and Conservatory graduate, whose work Veiled Expanse will be performed on the final concert. 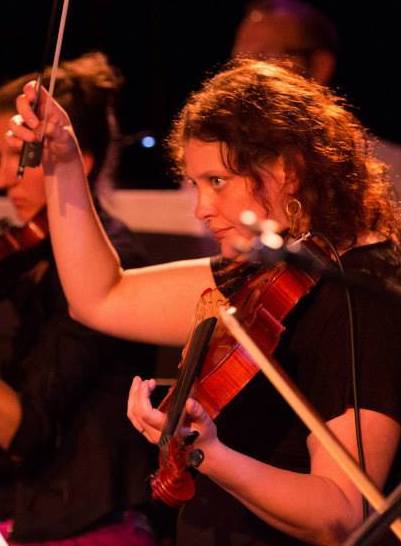 For Rogers (pictured), these concerts are not just a celebration of women composers, but of new music as well. According to that 2019 study from the Institute for Composer Diversity, just sixteen percent of all pieces performed that year were by living composers. “It’s hard to have the discussion about the underrepresentation of female composers without also talking about how underrepresented new music is in programming,” she said. “This series is about getting audiences familiar with different musical perspectives.”

To help strengthen that familiarity, each composer will introduce themselves and their work through pre-recorded videos that will play between each piece, giving the live performers time to set up the stage in the meantime.

“New music can be seen as intimidating and pretentious, and that really bothers me because it’s none of those things,” Rogers said. “So when people, especially other musicians, say they don’t like new music, that really breaks my heart.

“You don’t have to like everything you hear, but just listen. Always be curious, and always be engaged with the artists that live and work in your community.”

Jackson began the program with a recitation of Langston Hughes’ poem “Helen Keller” — the first of five poems by Hughes that served as interludes between each piece on the first half. END_OF_DOCUMENT_TOKEN_TO_BE_REPLACED

Pianos with pins and tape on strings, a bass drum and tam tam, crotales, Almglocken, and vibes. Microphones were hooked up all around the instruments. The feed was sent to speakers around the room. Lighting designer Nicholas Houfek hung incandescent globes over the arrangement of instruments from thin black wires stretching across the beams. END_OF_DOCUMENT_TOKEN_TO_BE_REPLACED

From the podium, Elim Chan set an ambitious tone for the evening. The rising star conductor, here in her Cleveland Orchestra debut, has a commanding style, and every twist and turn in Saturday’s performance tracked closely with her baton. END_OF_DOCUMENT_TOKEN_TO_BE_REPLACED