Although the turbulent marriage of F. Scott and Zelda Fitzgerald —  self-caricatures of the Jazz Age — has inspired a number of literary efforts in addition to their own near-autobiographical novels, the subject never seems to have been approached through the lens of opera. Composer Evan Mack and librettist Joshua McGuire have stepped in to fill that void with their one-act The Ghosts of Gatsby, commissioned by Samford University (Montgomery, Alabama), where it premiered in November 2018. The 40-minute show was revived at Music Box Supper Club last weekend by Baldwin Wallace and Cleveland Opera Theater in conjunction with the Cleveland conference of the National Opera Association.

The action takes place in a villa on the French Riviera in 1924, where F. Scott (tenor Ethan E. Burck) is at work on The Great Gatsby, and Zelda (soprano Mary Grace Corrigan), who is having an affair, is bored and demanding. Alcohol induces both a stupor and a fight. Zelda is visited by visions of her younger self (1918 Zelda, soprano Anissa Clay) and what she will become (1948 Zelda, soprano Sarah Antell). Scott ends up striking her, and the scenario turns into Zelda’s dream as she lies in bed in an asylum in Asheville (she was diagnosed as schizophrenic in the ‘30s) about to perish in a fire. 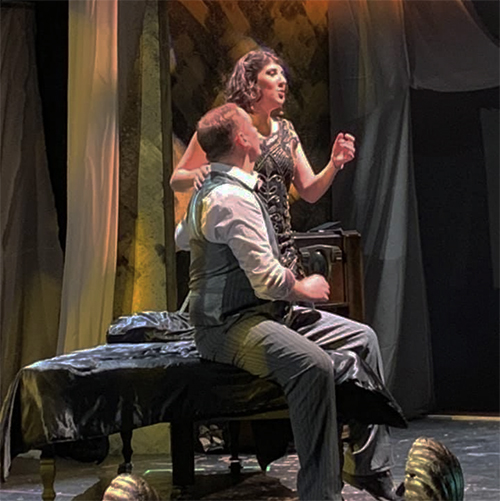 That’s quite a plot. The concept of the three Zeldas is intriguing, and Mack and McGuire pack a lot of psychological material into three quarters of an hour. Director Scott Skiba, also credited with costumes and props, staged the piece effectively for the Music Box’s small playing area, festooning it with drapes and dominating it with a bed which F. Scott spins around during a brief sexual frenzy (a detail Skiba also used in his production of A Streetcar Named Desire).

A small orchestra of string quintet, clarinet, percussion, vibraphone, and piano conducted by Dean Buck introduced the opera with “The Fitzgerald Songbook,” a mini-review of 1920s-style songs sung by the five-member cast. Otherwise, Mack’s score only occasionally hints at music of the period. Most of the score is stylistically abstract.

Singing and acting by the mostly undergraduate cast (Burck has gone on from BW to grad studies at Curtis) was strong and confident. Side projections of the libretto were welcome, both due to Mack’s disjunct text setting, which sometimes obscured the meaning of a sentence, and the cast’s diction, which was not quite as reliable as their singing.

The ambiance of Music Box Supper Club nicely suited the subject of Ghosts. Here’s to the quietly effective service of the venue’s staff, who took orders, delivered food, and got checks out without detracting from what was happening onstage.

That included the finale of the opera. If the ending seemed implausible — the 1948 Zelda going up in flames thanks to lighting effects — so did the lives of two iconic figures of the Roaring Twenties. The stuff of opera indeed.

END_OF_DOCUMENT_TOKEN_TO_BE_REPLACED

Tower dedicated this surprisingly brief work to “women who take risks and are adventurous.” Adventurous to be sure. While the opening theme is a subtle echo of Copland’s, the CSO brass was remarkably bright, crisp and crackling in its relentless morphing of the motif into quick, layered variations, both delicate and discordant, robustly spiced with startling bursts of timpani. END_OF_DOCUMENT_TOKEN_TO_BE_REPLACED