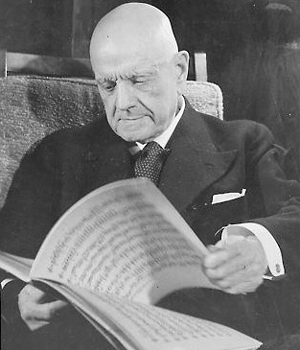 Composer: Jean Sibelius (1865-1957): Sibelius is Finland’s most important composer. He established his reputation as a leading orchestral composer in the 1890s and continued to create masterful works until the mid-1920s, when he retired from public life. For his remaining 30 years, he wrote almost no music and lived quietly in the countryside, enjoying visits from family and friends. He established a Finnish national musical identity in the face of Russian oppression, and was honored by his young country on several occasions. From a wider perspective, his art is representative of European nationalism at the time, as many of his pieces are inspired by Finnish folk music or mythology. He created a unique voice, and his music often borders on the mystical.

The Piece: Finlandia was composed for the 1899 Helsinki Press Celebrations, a protest against the Russian Empire’s strict censorship restrictions. It was the seventh and final installment in the Kalevala, a series of pieces based on stories from the Finnish epic poem that Sibelius wrote for the event. The work famously embodies the struggle and eventual triumph of the oppressed Finnish people over the Russians. 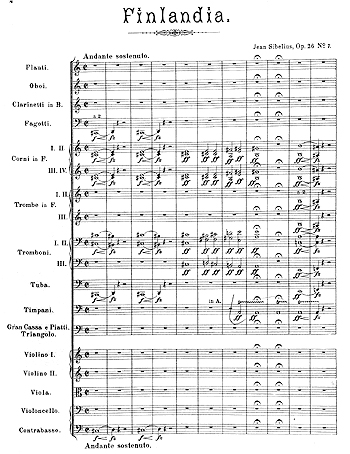 The piece begins with a dark and foreboding introduction marked by prominent brass and bassoons. This is a work that breathes very naturally, so take notice of how it swells in volume and when it takes dramatic pauses. The introduction evolves into a sweet section with a lulling chorale in the winds now known as the Finlandia Hymn. The music grows melancholic and the brooding theme of the introduction returns, erupting into a march filled with brass fanfares and cymbal crashes. There are two main themes in this section: one consists of rigid battle marches, the other of swooping string figures. Notice how the two seem to be duking it out musically. After the battle, the hymn returns in its full, shining vibrancy. Out of this healing melody grows another fanfare, this time a victorious one, resounding in pride and triumph. Never too bombastic or vociferous, it is instead joyous and satisfied.

Personal Notes: Finlandia is a great work to launch your journey into classical music, because it consists of a deeply human narrative: fighting against oppression. Even so, the piece ebbs and flows so naturally that is easy to lose yourself in it. I enjoy the subtleties in Sibelius’ orchestration. The consoling nature of the woodwinds juxtapose the hopeful, upward-looking vibe of the strings and the brazen sentiments of the brass. Although he received criticism during his lifetime for his non-Germanic orchestration style, today Sibelius is considered a master of his craft, and this piece is a wonderful representation of his talent. Having composed something so close to his heart, Sibelius’s music speaks to the very soul of the listener.