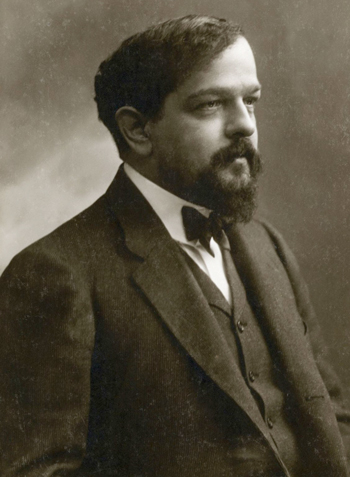 Genre: Symphonic Poem — an orchestral work based on a narrative
Scoring: Orchestra
Era: Late 19th century / Impressionist
Length: c. 10 minutes
Will you recognize it? The opening flute solo is a staple of classical music
Recommended Recordings: Charles Munch and the Boston Symphony Orchestra, or Bernard Haitink and the Royal Concertgebouw Orchestra

Composer: Claude Debussy (1862-1918). Debussy was a maverick of Western music clashing with tradition even as a student. Many of his professors found his early works far too dissonant and experimental. Though scholars largely associate him with the Impressionist movement in the visual arts, Debussy rejected the term for his own music. Working his way up from a Bohemian lifestyle, the composer became an important cultural figure and the leading French musician of his day, earning several honors from his country’s government. Debussy’s music is especially renowned for its pioneering harmonies. It can sound otherworldly and mystical. He also had a firm interest in music of other cultures, particularly the Javanese gamelan.

The Piece: Prelude to the Afternoon of a Faun is considered Debussy’s breakthrough work. The composer found inspiration for the piece from Stéphane Mallarmé’s revolutionary symbolist poem The Afternoon of a Faun, in which a faun awakens from an afternoon nap to muse on his romantic liaisons with nymphs. Debussy referred to his composition as “a very free illustration of Mallarmé’s beautiful poem.”

Among the work’s most important aspects are its innovative harmony and form. It often jumps to unexpected sounds, but Debussy’s writing flows naturally. Afternoon of a Faun is in free form, and the opening melody (played by the flute) wanders and evolves through new material. The orchestration, too, is unique for its time, highlighting each instrument’s color and unique sound qualities. Classifying the piece as a symphonic poem is problematic, as well, since the music follows no specific narrative. Debussy was a composer who knew how to break with tradition.

Personal Notes: Though Debussy may have rejected the term “Impressionist” to describe his own music, I find that his works have many connections to the visual art of that period. Faun evokes a vastness not unlike a large landscape painting. Its vivid colors and wonderful auditory effects — like harp glissandos and luscious swells of strings — are reminiscent of the Impressionists’ sense of light. The piece constantly ebbs and flows and is redolent of mystical and magical atmospheres. In the end it drifts away as mysteriously as it began.