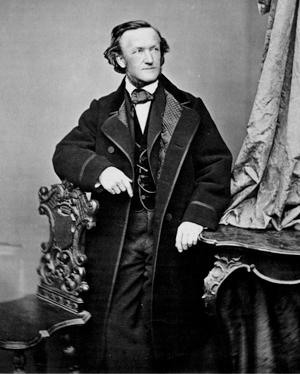 Genre: Prelude – an introduction to a work, in this case, an opera. (the Transfiguration is the final scene from the opera)
Scoring: Large Orchestra and Soprano soloist
Era: High Romantic
Length: 20 minutes
Will you recognize it? You’ll wish you did
Recommended Recordings: Karl Böhm, Birgit Nilsson, and the Bayreuth Festival Orchestra; or Otto Klemperer, Christa Ludwig, and the Philharmonia Orchestra

Composer: Richard Wagner (1813-1883) (pronounced VOG-ner). Wagner was the most important German opera composer of all time (Mozart was Austrian), as well as one of the most controversial figures in Western culture. However, he showed so little musical aptitude as a boy that his family refused to give him piano lessons; he showed more talent for theater. Wagner revolutionized music both through his groundbreaking use of harmonic dissonance and his conception of a “Total Artwork,” which combines music, drama, poetry, acting, scenery, and more into one art form.

Along the way, he had numerous love affairs, was constantly on the run from debtor’s prison (in which he may or may not have ended up), and was forced into 12-year exile from German-speaking countries for attempting to overthrow the King of Saxony during the 1849 Dresden revolution. Since his time, he has also garnered criticism for his anti-semitic sentiments.

In spite of what you’re probably thinking of the man, his influence on subsequent arts, not only music but also literature, poetry, visual art, film, and others, is impossible to exaggerate. He is considered the father of modernism in music, of film music, and of the symbolist movement in poetry. His music dramas are noted for being unabashedly intense, epic, and long — culminating in some of the most revelatory artistic experiences possible.

The Piece: The opera was considered unplayable and unsingable when it was written, but after six years and countless rehearsals it was finally produced, to great controversy. Clara Schumann referred to it as “the most disgusting thing I have seen or heard in my entire life,” while Nietzsche claimed “I am still in search of a work which exercises such a dangerous fascination, such a spine-tingling and blissful infinity as Tristan — I have sought in vain, in every art.” The opera has since become a staple for any important opera house and a mountain to climb for conductors, orchestras, and singers.

The plot follows two lovers: Tristan and Isolde, who could be viewed as symbols of the affair Wagner was having with the aristocrat Mathilde Wesendonck while composing the opera. Based on the Medieval legend of the same name, Tristan has won the princess Isolde for his own country’s King Mark. Long story short, Tristan and Isolde drink a love potion, fall madly for each other — but can’t be together. Tristan gets into a fight with the sailor Melot, an onlooker to their passions, ends up wounded, and dies. Isolde finds Tristan and expires, heartbroken.

The first two bars of the Prelude contain the famously dissonant Tristan chord. Filled with longing, unfulfilled desire, and sadness, it makes up the basis for the whole prelude. It evolves and wanders through sounds of suffering and yearning for love that can never be fulfilled. Lack of satisfaction is the psychological germ of the opera, which Wagner drew from German philosophers for its ideological foundation. Listen to how the prelude swells and gushes as it wallows in its sorrows, constantly driving forward, but never content. The music climaxes in a painful, unresolved tension before dying away. Wagner subtitled the Prelude “Love-Death.” There is no resolution until the final moments in the opera, the “Transfiguration,” when Isolde, finding Tristan dead, sings of being reunited with him. The conclusion can be seen as a metaphor for an orgasm, as though the pair’s love will finally be consummated after death. The “Transfiguration” scene starts from a quiet shimmer in the clarinet and strings, and builds to one of the most ecstatic and moving passages of music ever conceived.

Personal Notes: A Wagner opera can be difficult to sit through, so I wouldn’t recommend attempting the whole thing until you’re familiar with opera in general. The most important part in listening to Wagner is to take his music as it goes, and to really believe in what he composes. It’s an incredibly subjective matter, and Wagner just isn’t suited for some. But, if you can get into it, I guarantee it will be an unforgettable experience. 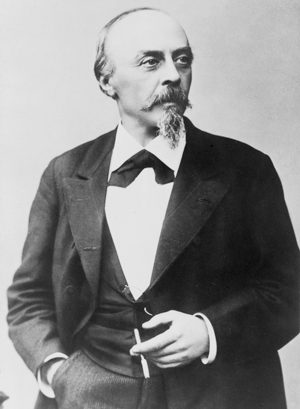