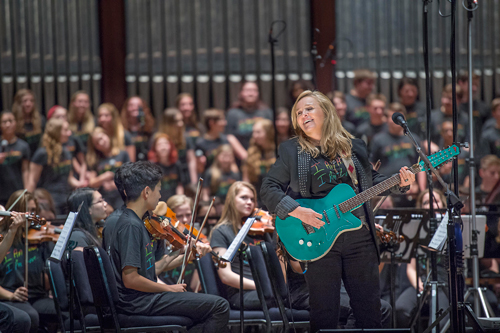 A flurry of proud parents and enthusiastic Melissa Etheridge fans descended on Severance Hall last Wednesday at 7:30 for her concert with the Contemporary Youth Orchestra. The concert was part of CYO’s annual “Rock the Orchestra” series. Etheridge and the Orchestra played songs spanning the rocker’s entire catalog, ranging from hits like I’m The Only One and lesser-known songs like Kiss Me. After an instrumental introduction led by music director Liza Grossman, Etheridge stormed the stage, then the ensemble launched triumphantly into Fearless Love.

The Leavenworth, Kansas native exchanged hugs and fist bumps with Grossman, and expressed her excitement about playing with the young musicians to the audience. Her passion was evident throughout the entire performance. Etheridge commanded the stage with a relaxed confidence that translated to her singing — she belted in her signature gruff and robust timbre without any problems. It was clear that she wanted the young ensemble to be the focal point of the concert. In fact, Etheridge and the Orchestra gelled so well that it seemed they had been playing together for years.

Instead of merely adding some strings, horns, and a few extra voices, Stefan Podell, who has arranged for CYO since 2009, created sonically rich and multi-textured arrangements for each song. This was most apparent during Chrome Plated Heart, which provided ample opportunity for soloists Elliot Vendel (trumpet) and Brian Pattison (trombone) to show off their improvisation skills. The standout solo of the number, however, came from principal cellist Spencer Yates, who demonstrated a strong sense of rhythm and played with a professional musicality and unique flair. Another stellar arrangement was Come to My Window, one of Etheridge’s most famous songs. It featured an introduction for solo harp, played beautifully by Cecilia Hiros, who demonstrated compelling phrasing and played the more challenging passages with style and ease.

The evening was filled with high-energy numbers that had audience members dancing in the aisles. But more poignant songs appropriately reflected today’s cultural and political landscape. Before playing Meet Me in the Dark, the singer admitted that she might not make it through without crying. The song depicts one of Etheridge’s teenage loves who was “taken away to be changed.” The musician was able to draw out the especially heartrending moments of the tune through simple phrasing and intuitive dynamics, blending her voice well with the Orchestra.

The highlight of the evening was during Pulse, the singer’s response to last year’s shooting at Pulse Nightclub in Orlando, featuring CYO percussionists Christopher Carmon, Erin Detchon, Sydney Gembka, Matthew Hoffman, Samantha Rooselot, and Lily Sadataki. Etheridge and the Orchestra were decked out in matching black shirts with the chorus of the song — “I am human, I am love” — in rainbow script. The house lights were dimmed and audience members stood, shining lights through colored sheets of paper to create a rainbow patchwork. The visual and sonic experience served as a reminder: no matter who we love, we must remain united in our shared humanity in the face of violent, hateful acts.

The history of classical music sometimes borders on mythology. The music on the Akron Symphony’s Saturday, February 22 program has taken on this fabled, quasi-historical quality — Mozart’s Requiem, Schubert’s “Unfinished” Symphony, and Beethoven’s over-finished Leonore Overture No. 3. Fortunately, in performance the music more than lived up to the story. END_OF_DOCUMENT_TOKEN_TO_BE_REPLACED

Cleveland’s Baroque Orchestra celebrated the Valentine’s Day weekend with four performances of “L’Amore: An Old Italian Valentine.” I heard the second concert on the evening of Valentine’s Day itself at St. Paul’s Episcopal Church in Cleveland Heights. Apollo’s Fire conductor and harpsichordist Jeannette Sorrell greeted the audience with the adage, “Italian is the language of music, of the angels, and of love.” END_OF_DOCUMENT_TOKEN_TO_BE_REPLACED

Every so often, the first seconds of a concert bring neither anxiety over how the rest will go nor twitchy overstimulation, neither boredom nor ecstasy, but a satisfying assurance. Some performances click right away, the musicians’ technique unimpeachable, their artistry and expression powerful, their manner warm but professional. Such concerts hold attention in a special way — the chances of a misstep negligible enough that listening never involves comparison to an abstract standard. In the Phaeton Trio’s recent tour de force in Rocky River, the initial gestures of the performance set a high standard that held throughout. END_OF_DOCUMENT_TOKEN_TO_BE_REPLACED

Musicians love a good metaphor: take, for instance, that of summiting a mountain. When a violinist speaks this way after playing all of Bach’s partitas, or a soprano recalls preparations for a Wagner opera, the image of the artist mounting some hostile peak offers implications of persistence, struggle, and of course triumph. Pianists might describe Beethoven’s sonatas this way. But how many have actually played at the top of a mountain? Archival video confirms that French pianist Pierre Réach literalized this image of the soloist at the summit over twenty years ago. A recent concert in Cleveland confirmed that the figurative Everest of Beethoven’s piano music still bears his banner as well. END_OF_DOCUMENT_TOKEN_TO_BE_REPLACED

The Cleveland Orchestra — or at least half of it — marked Valentine’s Day with a straight-through, 50-minute concert led by Belgian early music guru Philippe Herreweghe. The February 14 performance, marketed as a romantic evening of orchestral classics, played to a packed house (marketing works!). END_OF_DOCUMENT_TOKEN_TO_BE_REPLACED