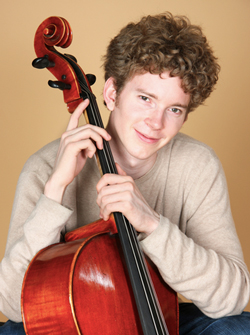 Given that the theme for the February 22 Canton Symphony Orchestra program at Umstattd Hall was “Czech Mates,” one would reasonably expect selections by Czech composers. So it’s interesting that the first work on the program was by Mozart, something of a country unto himself. His Symphony No. 38, “Prague,” is anything but Bohemian in character, and fit the bill if only because it premiered in the Czech capital to great acclaim in 1787.

That said, the three-movement work was quite effective in warming this audience on a very frigid afternoon. Call it a slow but steady burn. The lengthy first movement is just that, with its unfolding of several contrasting melodies. Heartrending lyricism from the strings and winds in the somber second movement further raised the emotional temperature until the Presto finale seemed to erupt into a lighthearted rollick.

Not surprisingly, conductor Gerhardt Zimmermann was genuinely exuberant when he introduced Josef Suk’s Scherzo Fantastique. He noted that the work, never previously performed by the orchestra, is “a wonderful piece, a fabulous piece.” That’s an understatement.

Fantastique indeed, this symphonic poem is a wholly enchanting musical gem. Through all of the zesty dance rhythms from the woodwinds, the lilting waltzes and solemn hymns from the cellos, and the riotous, untroubled joyousness of the blazing finale, the orchestra articulated the work’s shimmering lyrical facets with astonishing authority, clarity and grace. During one magical moment, Zimmermann halted his characteristically subtle hand movements altogether and simply stood gazing at his violin section. There was on his face a look of arrested ecstasy. He was clearly caught up, like we in the audience, in the achingly sweet poeticism of mesmerizing melody.

That same spirit of being caught up and captured was powerfully evident in guest artist Joshua Roman’s performance of Antonin Dvořák’s beloved Concerto for Violoncello and Orchestra in B minor. There must be an old soul behind Roman’s boyish countenance, for he played as if at one with the passionate heart of Dvořák himself.

Among the many remarkable aspects here was the uncanny sense of cellist and orchestra being inextricably united without one ever overpowering the other. Yet Roman was at once the inspired, fiery leader and accompanist. At times he eyed various sections of the orchestra between his solo passages, listening and looking intently, encouragingly. And those solo passages? Whether in soaring legato mode or in his crisp arpeggiations replete with thrilling instrumental effects, Roman’s technique was so breathtaking that he often appeared to visibly swoon over the music’s dramatic sweep, its melodic eloquence and lush harmonic colors.

You’d think that, after such a fierce exposition of soulful abandon, Roman would be utterly spent. But he regaled the enthralled house with an encore best described as a spontaneous combustion of styles, performed with all the intensity of a rock guitar soloist. This was a dazzlingly fast, improvisatory romp through folksy fiddling, furious strumming and chording, and staccato percussive effects I never thought possible with a cello. Was that smoke I saw rising from his bow?

END_OF_DOCUMENT_TOKEN_TO_BE_REPLACED

Supported by engagingly, yet simple staging by Cara Consilvio, a well-prepared cast of singers told the archetypal story of Cinderella with charm and flair. Framing the production was  a sparse but colorful set and wonderful lighting by Dave Brooks. END_OF_DOCUMENT_TOKEN_TO_BE_REPLACED