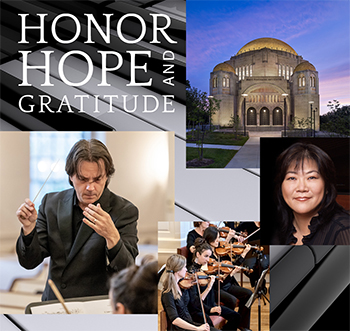 In a normal season (remember those?), Daniel Meyer would describe his job as music director and conductor of the Erie Symphony, BlueWater Chamber Orchestra, and the Lakeside Symphony. Since COVID hit, things have changed. “I’ve apparently become a film producer,” he told me in a recent telephone conversation. “That’s a skill set I didn’t know I had before the pandemic, but it’s helped justify our existence.”

Having already established a good relationship with Erie’s public radio and television stations, Meyer and the Symphony leapt at the invitation to produce eight hour-long programs over the course of the season in lieu of in-person concerts. “That forced us to get creative and explore some very interesting repertoire.”

Operating under the no-winds-no-brass mandate, Meyer and the orchestra had to come up with pieces that called only for strings “and a smattering of percussion — anyone who could play with a mask on.”

Meyer, who acted as host for the broadcasts, found the format congenial and the repertoire strictures curiously liberating. “You realize that you don’t have to play complete works.”

His Erie experience informed Meyer’s choice of selections for BlueWater’s upcoming online program, ‘Honor, Hope and Gratitude: Tender reflections on a challenging year.’ “We wanted to find a way to perform sans audience and to show how music can heal, console, and transport you,” he said. “Everything on this program is cut from the same cloth, and meant to be gentle, placid, and consoling.”

Pre-recorded at the Maltz Performing Arts Center at CWRU by audio engineer Jamie Stewart and videographer Adam Smalley, the performance debuts on Thursday, May 27 at 7:30 pm (click here for ticket information).

Meyer built the BlueWater program around Oberlin piano professor Angela Cheng. “I thought about her early on and wanted to feature her in Gerald Finzi’s Eclogue. She didn’t know the work, but her husband Alvin, who also teaches at Oberlin, helped persuade her to learn it. And I knew that she loves Chopin, so we chose the slow movement of his first concerto, which will demonstrate her poetic approach to the piece and her beautiful melodic voicing.”

The concert begins with Arvo Pärt’s Silouan’s Song, based on a text from a Russian monk living on Mount Athos who is said to have existed in an unceasing state of prayer. “I love Pärt’s spirituality, minimalism, and directness,” Meyer said. “This piece could be played by candlelight in a darkened cathedral.”

Meyer describes Ralph Vaughan Williams’ Five Variants on Dives and Lazarus as “a gem of the string repertoire,” and George Walker’s Lyric for Strings as “the composer’s answer to Barber’s Adagio for Strings — Walker and Barber were classmates at Curtis.”

Although Chopin made a portable version for piano and string quintet of his first concerto so the work could easily be played in Parisian salons, Meyer has chosen to use the full BlueWater string section in the recording.

Chopin will be followed by Edward Elgar’s Sospiri, or ‘sighs.’ “It’s a touching, searching miniature that’s comforting in the end,” Meyer said. He’ll follow that with the Larghetto from Elgar’s Serenade for Strings.

The conductor said that he was introduced to English music like Finzi’s Eclogue through the choral music he sang as a student at a church in Cincinnati, and he noted that a selection from Florence Price’s Quartet in G is influenced by the American Black choral tradition. “It’s tuneful, with a little bit of soul, and has a lovely pizzicato dance section in the middle.”

Finally, Jean Sibelius’ Andante festivo rounds out the program in what Meyer calls “a hopeful spirit that soars within a span of four minutes and looks toward the future.”

Daniel Meyer ended his commentary by observing what many conductors have learned in putting programs together. “Recording a list of small pieces is tricky because each has its own emotional content, and recording really puts a microscope on what you do. It would be easier to program a couple of complete symphonies.”

Looking forward — as the Sibelius selection suggests — Meyer envisions a return to normal, indoor performances in January and February. His Lakeside Symphony will play outdoors this summer in chamber orchestra format with its season reduced from three weeks to two. Erie and BlueWater are still developing plans for the fall. That’s the ‘Hope’ part of the May 27 program title.

END_OF_DOCUMENT_TOKEN_TO_BE_REPLACED

Franz Welser-Möst led the final bows on Saturday night at Severance, like the star of any show should. The Cleveland Orchestra’s music director is in his element presiding over the ensemble’s annual opera production, which this season packs the drama. Verdi’s Otello — in a concert staging that opened May 21 and runs for two more performances (May 26 and 29) — demands big voices, instrumental forces to match, and a conductor who can give it all shape and direction. END_OF_DOCUMENT_TOKEN_TO_BE_REPLACED

The cimbalom was the feature of the show, an instrument capable of taking on many personas. Its performer, Chester Englander, has shaped his career around the instrument, and has inspired composers to write more repertoire for it, some of which was presented on the program. END_OF_DOCUMENT_TOKEN_TO_BE_REPLACED