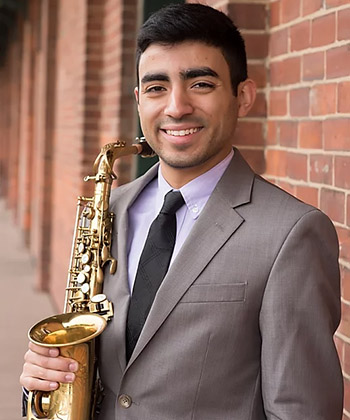 A bit of jazz, and even some rock crept onto saxophonist Gabriel Piqué’s program at Christ Church Episcopal in Hudson on October 31. Although he stuck to mostly classical repertoire in his Music From The Western Reserve recital, those occasional flashes of other genres didn’t seem out of place.

It was all part of a virtuosic whole, and the technical skills at work in one style — flying fingers, a carefully crafted sound — translated to every other genre.

The saxophonist put his classical chops front and center with the first piece, Fernande Decruck’s Sonata in c-sharp. The four-movement work gets note-y with quick triplet passages, double-tongued sections, and impressionistic arpeggios up and down the instrument, but Piqué kept a beautiful, vibrato-filled tone on alto sax throughout. He even took the expressive and technical extremes to the next level, seemingly playing without stopping for breath. In fact, he was using the technique of circular breathing, a wind player’s trick of taking in air through the nose while still blowing out of the mouth.

This same knowledge and command of the instrument was on display as the program steered away from strict sonatas. Paquito, a short piece by saxophonist Andy Scott, sits somewhere between classical and jazz — “but we’re definitely going to play it more like jazz,” Piqué told the audience. Accordingly, he adopted more of a straight sound (without vibrato) and tossed off fast sections in a cool, couldn’t-care way. Pianist Casey Dierlam Tse, who accompanied throughout the program, revealed herself to be similarly versatile and virtuosic.

Piqué went solo for Rock Me! an unaccompanied work by Barry Cockcroft that pushes the saxophone to its limits. Meant to evoke the instruments in an Australian rock band, the piece asks the player to produce some unconventional sounds, from low droning like a didgeridoo, to passages up the harmonic series imitating an electric guitar, to multiphonics (two or more notes at once) that ring out like feedback. The saxophonist pulled off the illusion impressively, each extended technique conjuring up another member of the band.

It was back to classical with another solo work, Piqué’s own arrangement of the first movement from Bach’s Sonata for Violin No. 1 in g. He made the stylistic 180 convincingly, balancing the voices in the composer’s complicated, unaccompanied writing like the best Baroque players do.

The saxophonist swapped out instruments for Heitor Villa-Lobos’ Fantasia, part rhapsodic like the Decruck Sonata and part highly rhythmic like Paquito. On soprano sax, Piqué was again in control, though the occasional tricky high note showed the unforgiving precision that the smaller instrument demands.

A pair of Romances by American composers William Grant Still and Amy Beach provided an opportunity for some decidedly less showy playing, and also made for a nice symmetry between the two halves of the program. The recital ended in fun though — a short arrangement of Saint-Saëns’ Danse Macabre, where the alto sax sound, maybe not surprisingly, was well-suited to the violin line.

END_OF_DOCUMENT_TOKEN_TO_BE_REPLACED

Supported by engagingly, yet simple staging by Cara Consilvio, a well-prepared cast of singers told the archetypal story of Cinderella with charm and flair. Framing the production was  a sparse but colorful set and wonderful lighting by Dave Brooks. END_OF_DOCUMENT_TOKEN_TO_BE_REPLACED