Classical music concerts in Cleveland usually thin out in July as festivals outside the city get under way, most notably The Cleveland Orchestra’s Blossom season. So it is a welcome turn of events to see a new international summer festival supported by University Circle institutions arrive for two weeks in mid-July. I attended the first weekend of Music in the Circle concerts that brought musicians from around the world to the Cleveland Institute of Music’s Mixon Hall on Friday, July 11 and to the Cleveland Museum of Art’s Gartner Auditorium on Sunday, July 14.

Each concert featured major repertoire in addition to a shorter piece of new music. The  CMA concert included some engaging visuals, but the real draw was the extraordinary music making. It’s hard to overstate how good the playing was.

Violinist Minju Kim, Gehweiler, and pianist Kathryn Brown then joined in a magical performance of Felix Mendelssohn’s Piano Trio No. 1 in d, spinning gold throughout the work’s four movements. The first was perfectly performed, and the second’s Lieder ohne Worte quality was simplicity itself, while the sparkling nuances and unflappable precision of the scherzo and finale left me speechless. It’s performances like this one that make me love classical music. 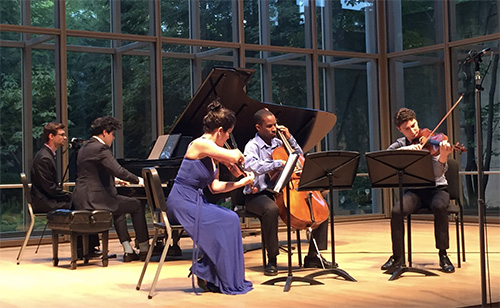 After intermission, Bushakevitz, violist Matthew Cohen, cellist Khari Joyner, and music director and pianist Or Re’em gave a splendid reading of Brahms’ Piano Quartet No. 2 in A. This intense yet open-hearted work in four movements spread like butter across the rest of the evening. The care these musicians took with their soft dynamics was spectacular — especially in the Poco adagio — and they applied their imposing virtuosity to the scherzo and finale.

The Sunday afternoon concert at Gartner began with another grand chamber music statement —   Dvořák’s Piano Quintet in A. Filling out a towering 40 minutes, Bushakevitz, Kim, Cohen, Joyner, and pianist Yaron Kohlberg played this expansive narrative work with passion. The first movement was powerful and dramatic, while the elegiac “Dumka” was beautifully songful, especially the ecstatic and bubbling second section. The “Scherzo (Furiant)” was a virtuosic feast, and the boisterous finale with its gorgeous, translucent coda was fantastic. 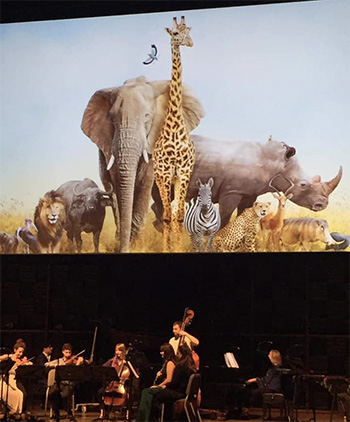 Camille Saint-Saëns’s Carnival of the Animals is a perennial favorite. Overdubbing text by Ogden Nash and Roger Moore spoken by Re’em and Bushakevitz brought it up a notch, but adding beautiful HD images of the animals on a gigantic screen above the stage really made this performance memorable. Re’em and Brown played the piano parts exquisitely, and the orchestra was in chamber music mode with one person per part. Flutist Mackenzi Danner fluttered fantastically in the “Aviary.” Martin’s clarinet playing was delightfully bird-brained in “The Cuckoo in the Woods,” Renneker’s xylophone appropriately boney in “Fossils,” and Henry Samuels’s double bass splendidly gruff in “The Elephant.” Gehwieler and his cello easily stole the show with “The Swan.” Rounding out the ensemble was violinist Ariel Clayton Karas, Bushakevitz, and Cohen. Most of the movements worked quite well without a conductor, but a few moments here and there could have used help with precision. Otherwise, this performance was a reminder of how purposefully silly music can win the day.

One strange thing that can easily be corrected in future years, is that the only time anyone spoke from the stage was following the final piece at Mixon, catching some members of the audience already at the exits. Nevertheless, the first-rate music-making on display with Music in the Circle already makes me itch for a second festival next year.

The cimbalom was the feature of the show, an instrument capable of taking on many personas. Its performer, Chester Englander, has shaped his career around the instrument, and has inspired composers to write more repertoire for it, some of which was presented on the program. END_OF_DOCUMENT_TOKEN_TO_BE_REPLACED

You wouldn’t expect that acoustic from a glance at the nave, which is wide and long, but not especially lofty. But when I guest conducted a local amateur choir and professional orchestra in Beethoven’s Mass in C there a few years back, during the first rehearsal we released the final chord of the “Gloria” and listened in astonishment for the next several seconds. The sound continued to roll down the space like the big wave that surfers dream about. END_OF_DOCUMENT_TOKEN_TO_BE_REPLACED