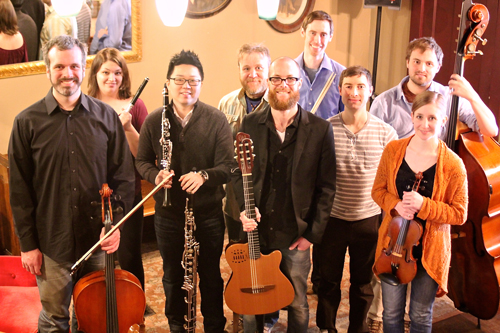 The 2015 edition of NEOSonicFest will end with a bang when FiveOne Experimental Orchestra (51XO) presents an innovative program on Saturday, March 28 at 8:00 pm at Zygote Press. Along with other surprises, the evening will include music by Marc Mellits, David Crowell, and Ted Hearne as well as a 51XO Zygote Jam.

“We wanted to play someplace downtown for the Festival, and when I checked out Zygote Press I was completely captivated by some of the equipment that they have,” 51XO’s artistic director John HC Thompson explained during a telephone conversation. “They have a lot of antiquated printing equipment and other toys we can play with like hoses, vacuum cleaners and giant pieces of metal. We’ve been having fun figuring out how to incorporate all these things into the show.”

The first half of the evening will take place in Zygote’s intimate gallery space with the orchestra set up in the center. The audience will be invited to sit or stand in a circle around the musicians.

The program will begin with Marc Mellits’s Machine V (2001), a recent addition to 51XO’s repertoire. “We performed it for the first time last month,” Thompson said, “and it’s a really good piece that makes a very good opener. It says ‘Here We Are’ to the audience. It’s very fast and energetic — almost like punk rock with its repeated eighth notes and meter changes. It’s very intense.”

Two pieces by David Crowell will follow — Waiting in the Rain for Snow (2011), a work they are reprising from last season’s NEOSonicFest, and the world premiere of Like a Machine, a 51XO commission. “This is our first formal commission,” Thompson said. “We played Waiting in the Rain last year. All the members of the group really liked the style, so it became the seed for commissioning David to write this new work. We’re playing the two pieces back-to-back so the audience can hear the music that inspired us, but also to show how David has developed as a composer. He has a very distinct compositional style and it’s fascinating to put the two pieces side by side. Like a Machine is extremely difficult, and we’ve been rehearsing it constantly this past month. We’re excited to be able to play it for the first time in public at the show.” 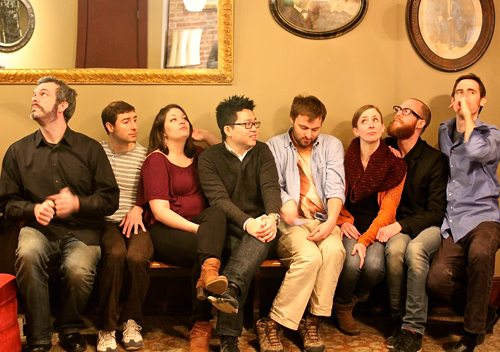 During a short break, the concert will move into the Zygote Press workshop. There, the audience will be able to explore some of the printing equipment.

The evening’s second half will begin with Ted Hearn’s Furtive Movements (2012) for amplified cello and percussion. Thompson described it as an abstract, even bizarre piece with a very modern musical language. He also pointed out that, unlike the first half of the program, which is full of speed and a lot of energy, Furtive Movements is a little more sparse. “It reminds me of experimental music that was being written in the mid-1960s. I haven’t spoken to Ted about my impressions so I’m not certain what he was thinking when he wrote it, but it is a really cool piece. It’s also fun to watch the extended techniques that are used by the cello. I hope the audience can get close enough to see the wine corks placed between the strings, and watch the cellist playing on both sides of the instrument’s bridge. There are a lot of unique sounds in this piece.”

The night will conclude with the 51XO Zygote Jam. “We’ve been improvising together a lot during rehearsals, and we’re to the point where we can create a piece of music out of free improvisation,” Thompson said. Remember the antiquated printing equipment and other toys like hoses, vacuum cleaners and giant pieces of metal? Thompson hopes to have some of the printmakers and 51XO percussionists create a rhythm section using these ‘toys’ that the rest of the orchestra will respond to. “We want to create a big sound that will fill the entire building, and if we can get all of this equipment going, along with the orchestra playing, we should have a very big sound.”

In addition to experiencing an evening of intriguing music, concertgoers will also have the opportunity to make their own commemorative poster. “Everyone will be able to draw the giant levers on the equipment, and press the heavy-weighted ink pads to create their own copy of the poster that we’ve pre-designed for the concert. We’ve taken a page from David Crowell’s score and superimposed 51XO’s and the NEOSonicFest’s logos, and the date of the commission on it. We’ve tried to think of ways to engage the audience a little bit more, and the poster will give them something to take home as a remembrance of the Festival and the show.”

END_OF_DOCUMENT_TOKEN_TO_BE_REPLACED

Rodgers & Hammerstein’s Cinderella was originally produced for television in 1957 — seven years after the animated Disney film was released — and starred Julie Andrews. According to the Rodgers & Hammerstein website, it was viewed by over 100 million people. END_OF_DOCUMENT_TOKEN_TO_BE_REPLACED

The story line has its origin in an 1855 play and an 1842 farce that Thornton Wilder mined for his 1938 play The Merchant of Yonkers. When that turned out to be a flop, in 1954 Wilder made the crucial decision to re-center the show around the character of the legendary marriage broker Dolly Gallagher Levi and renamed it The Matchmaker. END_OF_DOCUMENT_TOKEN_TO_BE_REPLACED

The Dodero Center for the Performing Arts at the Gilmore Academy in Gates Mills is one feature of an impressive campus. The auditorium is shallow, the stage is deep, and the ensemble played without a shell. Throughout the program, the sound, especially in instruments’ lower registers, tended to disappear. END_OF_DOCUMENT_TOKEN_TO_BE_REPLACED