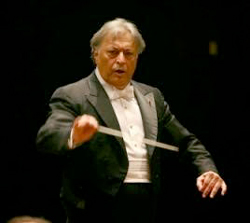 The Cleveland Orchestra announced today that the Israel Philharmonic, led by its music director, Zubin Mehta, will perform in Severance Hall on Monday, November 16 at 7:30 pm as part of the Violins of Hope Project. The event, part of an eight-city tour of the United States, will be presented in collaboration with the Jewish Federation of Cleveland.

Mehta, who will be making his Severance Hall debut on November 16, has led the Israel Philharmonic since 1977 and serves as its music director for life. The program will include Josef Bardanashvili’s A Journey to the End of the Millennium, Maurice Ravel’s La valse, poème chorégraphique & Antonin Dvořák’s Symphony No. 9 in e (“From the New World”).

Tickets are now available online from the Severance Hall box office.
Return to the Front Page.

END_OF_DOCUMENT_TOKEN_TO_BE_REPLACED

The strings-only work by Berg has made relatively frequent appearances on the Orchestra’s programs. In 2021, the musicians recorded it for the In Focus series, and it appeared again on last year’s European tour. Friday’s rendition maintained the group’s characteristic light and effortless playing, each section blending as much as possible to echo the work’s original form as a string quartet. At fifteen minutes total, the piece is quite short, but the dense encoded musical meanings require some extra-attentive listening. Splitting up the three movements ensured that each one could be appreciated on its own. END_OF_DOCUMENT_TOKEN_TO_BE_REPLACED