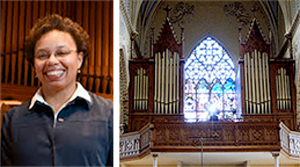 Two days after welcoming CityMusic Cleveland and John Corigliano for a concert in its nave, the Shrine Church of St. Stanislaus inaugurated its recently-restored William Schuelke Organ with a concert by organist Nicole Keller, assisted by two of her Baldwin Wallace Conservatory colleagues — flutist Sean Gabriel and violinist Julian Ross. Keller’s well-planned, beautifully executed program put the 1910 organ through an engaging shakedown cruise that showed its basic character and its range of capabilities.

Oddly enough, nobody seems to know where the Schuelke instrument originally came from, but it replaced an 1891 organ that perished in a tornado in 1909. The Votteler-Holtkamp-Sparling Company used nearly all of Schuelke’s original pipework in a 1933 rebuild. The next renovation was accomplished in the 1980s when parish volunteers replaced leather and wiring. Then after a series repairs by the Holtkamp Company, the instrument was completely restored by the James Leek Company beginning in 2016. Leek added two new stops to the tonal palette — a three-rank mixture and a clarinet.

As Shrine music director David Krakowski told the audience, the quarter-million-dollar 2016-17 restoration was funded by the Kulas, Fred Geis, Corinne Dodero, Third Federal, and Kurz Foundations as well as by “donations from parishioners, candy, cookbook, tomato plant and bakery sales, and monthly raffles.” Clearly, the people at St. Stan’s really wanted this project to happen.

Next, the Schuelke proved to be a sensitive continuo instrument, supporting Gabriel’s and Ross’s lyrical lines in Telemann’s a-minor Trio Sonata with colorful flutes and gentle foundation stops. 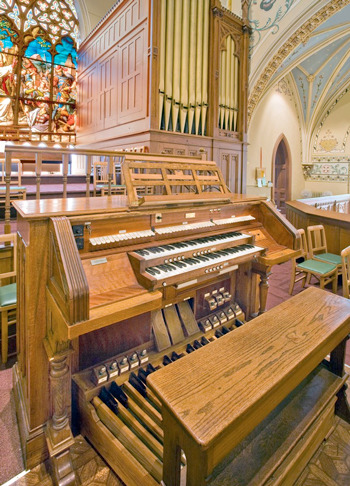 Daniel Pinkham’s little hagiographic sketches, Saints’ Days, gave Keller nine opportunities to explore solo stops and different registrations, and the audience the chance to learn some interesting facts about holy people. Did you know that St. Brigid turned water into beer? Or that St. Canice got after the birds for making too much racket on Sundays? Keller put the little pictures across vividly.

The best organ recitals tuck a surprising piece in at just the right moment, and Naji Hakim’s Capriccio for Violin and Organ provided a delightful entremet on Sunday. Hakim, who succeeded Olivier Messiaen at La Trinité in Paris, is known for his improvisations and avant-garde pieces, but the Capriccio is an outlier — a vaudevillian bon-bon that Ross and Keller had great fun with. At times, the organist provided the kind of percussive undercurrent more commonly heard on a theater organ.

And the best recitals also include a rarity, in this case the “Air” from Florence Price’s Suite for Organ, a mildly bluesy piece by the first African-American woman to have a symphony performed — in her case by the Chicago Symphony. Price was also a student of Leo Sowerby, and clearly absorbed some of her mentor’s complex harmonies.

Felix Mendelssohn’s Fourth Sonata closed the program with a work that suited the instrument perfectly. The lovely clarinet stop made an appearance in the Andante, and the new mixture melded beautifully into the plenum in the finale. Keller, who also serves as associate organist at Trinity Cathedral, played the Mendelssohn with expansive gestures and fluent technique, giving a nod to the composer’s moments of Victorian sentimentality, but also bringing out the strong rhetorical gestures and structure of his music.

END_OF_DOCUMENT_TOKEN_TO_BE_REPLACED

Rodgers & Hammerstein’s Cinderella was originally produced for television in 1957 — seven years after the animated Disney film was released — and starred Julie Andrews. According to the Rodgers & Hammerstein website, it was viewed by over 100 million people. END_OF_DOCUMENT_TOKEN_TO_BE_REPLACED

The story line has its origin in an 1855 play and an 1842 farce that Thornton Wilder mined for his 1938 play The Merchant of Yonkers. When that turned out to be a flop, in 1954 Wilder made the crucial decision to re-center the show around the character of the legendary marriage broker Dolly Gallagher Levi and renamed it The Matchmaker. END_OF_DOCUMENT_TOKEN_TO_BE_REPLACED

The Dodero Center for the Performing Arts at the Gilmore Academy in Gates Mills is one feature of an impressive campus. The auditorium is shallow, the stage is deep, and the ensemble played without a shell. Throughout the program, the sound, especially in instruments’ lower registers, tended to disappear. END_OF_DOCUMENT_TOKEN_TO_BE_REPLACED