Despite predictions of snowy weather, there was a full house and enthusiastic audience at the Bop Stop on Friday evening, January 17, for the latest concert by the Cleveland-based new music group No Exit, collaborating with their Twin Cities counterpart Zeitgeist. The program was concise and wildly varied, with several first performances. Each work contained imaginative soundscapes and alluring musical ideas.

No Exit opened the program with five movements from Jonathan Posthuma’s ongoing series Paul Klee: Painted Songs, based on the visual works of the Swiss-born German artist. “Carnival in the Mountains” is overt sound-painting, a phantasmagoria of a tango along with other palm court dance music, but with menacing undertones. “She Bellows, We Play” is a duo for flute and clarinet, with each playing sinuously chromatic lines, sometimes taking the lead, other times following.

“Destroyed Place,” a study in silences broken by passages for flute and alto flute, was effectively performed by Sean Gabriel. Interpolations on a gong, played with both mallets and wire brushes, simulate wind blowing through a silent, empty space.

The most effective of this set was the fifth movement, “Dream City,” which hints at Olivier Messiaen’s chamber writing in Quartet for the End of Time. Posthuma’s harmonies overlap and evolve sensuously, growing ever more ecstatic as the music progresses. I was left wanting a longer movement with even more development.

The Italian composer Giacinto Scelsi (1905-1988) also composed surrealist poetry in French. His 1965 Xnoybis II, played with extreme virtuosity by violist James Rhodes, is only a few minutes in duration. It is a study of a single note, D-sharp, with variations of pitch, duration, and dynamic. The viola was tuned so that several strings were playing slightly altered versions of the D-sharp. Despite consisting of only one note, the piece was not at all boring. The techniques foreshadowed Scelsi’s fellow Italian Luciano Berio’s series of Sequenzas which have similar virtuosic ambitions. 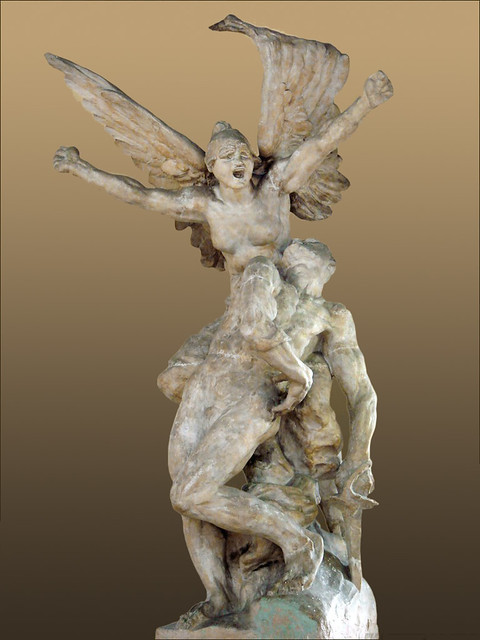 Inspired by a Rodin bronze sculpture depicting a fierce angel protecting a dying soldier, Michael Rene Torres composed The Call to Arms for No Exit, who gave it an emotional and technically adept performance. Its sonorities are often jagged — with repeated notes in and out of phase — and violently dissonant, but alternating with moments of aching beauty and lyricism. Torres played the alto saxophone in the ensemble, which also included violinist Cara Tweed, clarinetist Gunnar Owen Hirthe, and cellist Nicholas Diodore.

The second half opened with a joint performance of From Unknown Silences (1996) by Pauline Oliveros, the Grand Earth Mother of American avant-garde music. The ensemble was spread throughout the expanse of the Bop Stop, and it wasn’t clear what performing instructions the composer gave to the performers. The program notes referred to “continuous variation” framed by silence framed by sound. Close listening and watching indicated the performers used their instruments in every way except traditional performance. The clarinet player behind me ended this realization of From Unknown Silences with an accurate representation of a fart.

By contrast, Zeitgeist clarinetist Pat O’Keefe’s reworking of Silvestre Revueltas’ Sensemaya into his own Sensemaya/Sense of Mind was a model of tonality. O’Keefe’s highly imaginative and entertaining Afro-Cuban mashup involved piano and two percussionists, with the composer on bass clarinet. Revueltas’ music is still apparent, but here it is more minimalist, with a scarier and more vicious edge. This was one of the highlights of the concert.

Tiffany Skidmore’s The Psyche and Cupid Miniatures I-IV are extremely brief excerpts — all less than a minute — from her opera-in-progress. Piano, bass clarinet, and percussion each make their contributions, but the excerpts seemed more like sound clips or studies in sonority intended for further elaboration.

Zeitgeist included two works originally composed for their annual series of Halloween concerts in St. Paul. Both Daniel Nass’s Shadows of Shadows Passing and Doug Opel’s Midnight Mary are collections of the musical passages and effects that fill modern horror movie scores — entertaining, but musically slight. Of the two, Midnight Mary was more intriguing for its programmatic exploration of the obsessive 19th-century fear of being buried alive. There were eerie scratches, a triangle sounding like a jangling bell, and unsettling passages for two miniature music boxes integrated into the texture, along with the swooping sounds of a souped-up Theremin, that early “hands-off” electronic instrument.

The program closed with Buck McDaniel’s Scherzo in Four Movements, which served as something of a musical farewell to Cleveland as McDaniel moves to New York to further his musical career. In his pre-performance remarks, the composer noted that the classical symphonic scherzo is a kind of musical joke, but not necessarily a funny one. One of the movements lampoons the English Renaissance composer Orlando Gibbons’s setting of the word “motion” as “mo-see-on.”

McDaniel’s minimalist writing is highly influenced by the works of Steve Reich, but with far greater harmonic variety and motion. McDaniel also gives a tip of the hat to his composition teacher by reworking part of an Andrew Rindfleisch work with different harmony and development. Zeitgeist gave the Scherzo a joyous, expert performance, enthusiastically received.

With this work, premiered in 1907, Sibelius offered a bold departure from the explosive emotionalism so prevalent in late-Romantic era music. This symphony was a renewed embrace of Classicism’s purity of form and melody, and one that, oddly enough, left many initial audiences of the day somewhat bewildered. END_OF_DOCUMENT_TOKEN_TO_BE_REPLACED

After eating a Po’boy from The Dawg Bowl Cajun food truck, I caught the first half of Brian Culbertson’s show in The Connor Palace Theatre. END_OF_DOCUMENT_TOKEN_TO_BE_REPLACED