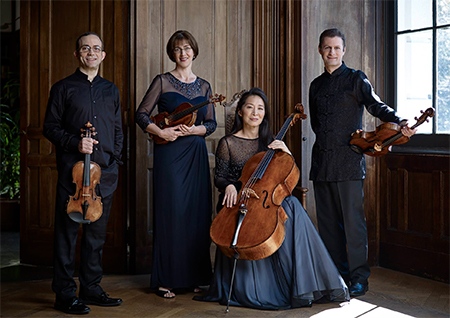 On the night of Good Friday, as the Brentano Quartet filled Oberlin’s Finney Chapel with shimmering sound, a question came to mind: what is the essence of a madrigal? Put simply, a madrigal is an Italian Renaissance form for voices full of musical effects that paint clear tonal pictures of the words being sung. More complexly, a madrigal is so shaped by its text that it constantly molds itself into new forms like Descartes’ philosophical ball of wax.

But how could a string quartet — usually the provenance of Haydn, Mozart, and Beethoven — bring about such thoughts? Because the Brentano Quartet — violinists Mark Steinberg and Serena Canin, violist Misha Amory, and cellist Nina Lee — provided an unconventional program including arrangements of madrigals by Carlo Gesualdo and Claudio Monteverdi and Stephen Hartke’s The Fifth Book.

The three selections by Gesualdo — from his fifth book, published in 1611 — show this mannerist composer-prince as a master of light and shade. The music is achingly poignant and sonically beautiful with its shifting colors and hesitating phrases. And its spare, chromatic excursions in and out of another magical universe didn’t require the text to savor the chiaroscuro.

Reminiscent of earlier composers’ use of imitation and his own path-breaking venture into Baroque spectacle, Monteverdi’s set of four madrigals — from his sixth book, published in 1614 — is full of light melancholy and spurts of regal dancing. Mark Steinberg’s wonderful arrangements of both sets are ear-catching. Particularly lovely were the sections where Lee plucked and Amory bowed the same line. The quartet played with a vivacious lightness befitting this gorgeous music. Each madrigal’s ending chord was a resonant delight: vibratoless and perfectly tuned.

Placed between the long-dead Italians was The Fifth Book (2016) by Hartke, Oberlin’s head of music composition, who was in attendance. His five movements are kaleidoscopic in their textures and timbres, accompanying impassioned climaxes and powerful melodies. His buzzing, scurrying, and chromatic universe gives this set an unsettled character underlined by cut-off phrase endings. The Brentano played this virtuosic, fluctuating narrative with utter conviction and understanding. Are these madrigals? Hartke certainly captures a shifting essence of the form.

While Hartke wrote that he hopes his work conveys “a private, unspoken drama,” Dmitri Shostakovich’s String Quartet No. 12 in D-flat, Op. 133 is a public airing of a private, numbing tragedy. It opens with a twelve-note tattoo and then settles into a hard-edged tonal world. Even the snatches of waltz appear through a prism that makes major chords sound melancholy. Shostakovich’s long paragraphs give each section a heavy weight in which major brutalist climaxes build up over minutes. Especially powerful was a reappearing, parallel, minor-chord chant surrounded by cello yearnings.

The Brentano molded this two-movement work into an expansive narrative, and showed why Shostakovich’s quartets might be this past century’s most rewarding cycle. Go hear them play this quartet again in Akron on April 18. You won’t regret it.

END_OF_DOCUMENT_TOKEN_TO_BE_REPLACED

Supported by engagingly, yet simple staging by Cara Consilvio, a well-prepared cast of singers told the archetypal story of Cinderella with charm and flair. Framing the production was  a sparse but colorful set and wonderful lighting by Dave Brooks. END_OF_DOCUMENT_TOKEN_TO_BE_REPLACED