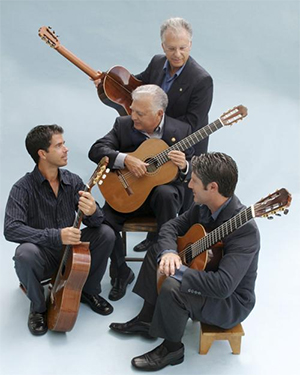 Is it possible to get too much of The Romeros? Apparently not. For 65 years the venerable guitar quartet, known as “The Royal Family of the Guitar,” has been captivating audiences around the globe with their signature flamenco style, impeccable ensemble, and richly hued sound.

On Sunday, November 18 the ensemble’s current lineup — Celin, Pepe, Lito, and Celino Romero — brought these qualities and more to their Finney Chapel concert. The Oberlin Artist Recital Series appeared to have had little problem selling tickets — the 1,200-seat venue was nearly full.

As is their tradition, The Romeros began and ended each half of the program with a quartet while solos and duos were featured in between.

Demonstrating their immaculate ensemble and technical dexterity from the start, the quartet opened with the perfect piece to draw listeners in — the “Preludio” from Ruperto Chapí y Lorente’s La Revoltosa. They brought old-world flair to Pepe Romero’s arrangement of the “Introduction” and “Fandango” from Boccherini’s Guitar Quintet in D. The group was on fire during the famous Spanish dance, which was defined by a large color palette, a full range of dynamics, and pounding rhythms. Never have imitations of castanets sounded so natural.

After a spirited interpretation of Manuel de Falla’s “Miller’s Dance” from El sombrero de tres picos, the quartet brought an inimitable Spanish flavor to the composer’s “Danza Española No. 1” from La vida breve.

In addition to being an accomplished performer and arranger, Pepe Romero is also a formidable composer, as was evident in two movements from his Suite flamenca. “En el Sacromonte” depicts the life of the Gypsies in the hills of Spain, and is full of exotic harmonies and Moorish effects. “Colombianas,” as the title suggests, is full of Colombian rhythms. Here the composer creates a new style of flamenco. The Quartet brought finesse and passion to both.

Brothers Celin and Pepe were center stage for the first of two superb duo performances. Their playing of Albéniz’s “Granada” from Suite Española No. 1 was simply beautiful. Later, Celino, son of Celin, and Lito, son of founding member Angel, provided a memorable presentation of Granados’s “Danza No. 2” (Oriental) from Danzas Españolas. The younger Romeros brought a remarkable depth of sound, well-shaped phrases, and solid rhythm to their playing.

The program’s first solo opportunity was given to Pepe, who was a musical magician, producing an intimate yet expansive sound during the “Evocación” and “Tonadilla” from Barrios’s Arroyos de la Alhambra. He proved himself a technical master in his passionate interpretation of Turnia’s Fantasia Sevillana. Celin played with precise articulation in Villa-Lobos’s Preludio No. 1, and his Preludio No. 3 was mesmerizing.

Celino’s performance of Sebastián Iradier’s La Paloma (“The Dove”) was full of color and dynamic changes. He then paid tribute to Celedonio, the founder of Los Romeros, with a sublime interpretation of his grandfather’s “Fantasia cubana” from Suite Andaluza. The flamenco-inspired dance music highlights all that the guitar can do — harmonics, percussion, tambourine, and other special effects, like playing high on the neck of the instrument.

This was a concert that went by far too fast, and at the end, the audience wanted more. The Romeros graciously obliged with Celedonio’s most famous work, Malagueñas.

The cimbalom was the feature of the show, an instrument capable of taking on many personas. Its performer, Chester Englander, has shaped his career around the instrument, and has inspired composers to write more repertoire for it, some of which was presented on the program. END_OF_DOCUMENT_TOKEN_TO_BE_REPLACED

You wouldn’t expect that acoustic from a glance at the nave, which is wide and long, but not especially lofty. But when I guest conducted a local amateur choir and professional orchestra in Beethoven’s Mass in C there a few years back, during the first rehearsal we released the final chord of the “Gloria” and listened in astonishment for the next several seconds. The sound continued to roll down the space like the big wave that surfers dream about. END_OF_DOCUMENT_TOKEN_TO_BE_REPLACED