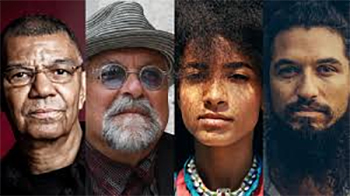 DeJohnette agreed. “Sometimes people come together and the magic happens,” he said. “We have a lot of love and respect for each other as people and as artists, and the propensity to work together cooperatively is greatly enhanced because of that.”

The root of the Spring Quartet family tree can be traced directly to DeJohnette. “We’ve all been listening to Jack’s music,” Lovano said. “He’s been one of the premiere modern jazz musicians on the scene for quite some time, from his work with Charles Lloyd, Miles Davis, Keith Jarrett, and all the things he’s done as a leader through the years. His music has inspired me, Esperanza, and Leo.”

Lovano, who holds the Gary Burton Chair in Jazz Performance at the Berklee College of Music, has known Esperanza Spalding and Leo Genovese since their student days. “They were both part of my ensembles and recital classes, and since that time Esperanza was part of my Us Five quintet, so we’ve been playing since around 2006. But Jack is such a forward thinking, amazing musician that he knew what Esperanza and Leo were into long before anybody had heard of them — he’s got a lot of radar.”

Regarding the playlist for Wednesday’s concert, Lovano said that they’ll be presenting “a beautiful repertoire of original compositions that we all brought into the mix.”

The group got together for a couple days of rehearsals at Lovano’s studio and revisited some tunes they performed on their last tour, as well as some new pieces. “At the end of the two days we had 20 different tunes that we’re going to explore during these concerts. Each night we’re going to put a different combination of them together.”

Although the group played through far more than 20 tunes over the two days, Lovano said they chose the ones that “rose to the level of expression that we wanted. We want every tune to have its own feeling — we don’t want any repeats.

On Monday, we’ll hear more from Jack DeJohnette and Joe Lovano as they discuss their long careers and their thoughts on music education.

END_OF_DOCUMENT_TOKEN_TO_BE_REPLACED

Tower dedicated this surprisingly brief work to “women who take risks and are adventurous.” Adventurous to be sure. While the opening theme is a subtle echo of Copland’s, the CSO brass was remarkably bright, crisp and crackling in its relentless morphing of the motif into quick, layered variations, both delicate and discordant, robustly spiced with startling bursts of timpani. END_OF_DOCUMENT_TOKEN_TO_BE_REPLACED