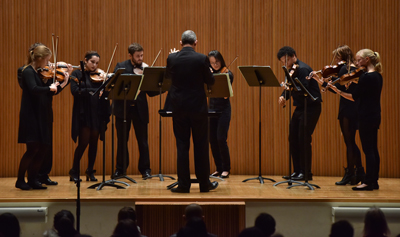 Whether by happenstance or design, the program was arranged in ascending order of duration — not that any of the works were lengthy. First up, Norman’s Gran Turismo for eight virtuoso violinists took only 8 minutes to play, and the closer, Sanchez-Gutierrez’s Five Memos, flew by in under 15.

Norman’s 2007 piece is named after a race car driving video game, which accounts for the frenzied music he wrote for the violins, who were arranged in a circle around Weiss. “Pedal to the Metal, with excessive energy” is the tempo marking at the beginning, and outside of two slower, more lyrical sections which intervene along the route, the rhythmic energy flows unabated to the end, goaded on by Norman’s instructions to the fiddles to “floor it” and saw away “as fast as possible.” Norman is terrific at writing structured music of relentless activity, and the Oberlin violinists gave Gran Turismo a splendid outing. 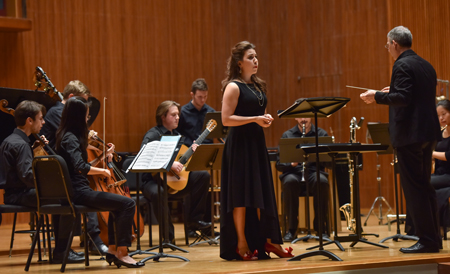 Perhaps the most engaging work on the program, Jesse Jones’s One Bright Morning is based on a nonsense poem that purports to be a folk text. Soprano Olivia Boen, a third-year student of Daune Mahy, gave a distinguished U.S. premiere of this sprightly work. Singing brightly with crisp diction, Boen put across the silliness of the text (“One bright morning in the middle of the night, two dead boys got up to fight…”) with mock seriousness, supported by flute, piccolo, clarinet, bass clarinet, percussion (including an obligatory slapstick), piano, guitar, violin, cello, and bass. 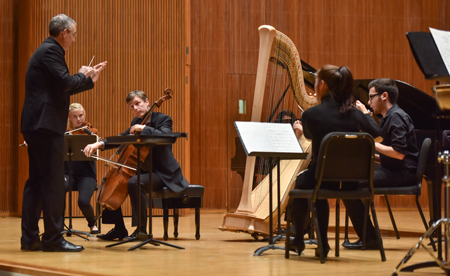 Oberlin cello professor Darrett Adkins was featured in Thomas’s Passion Prayers, written in 1999 and the oldest work on the program. Adkins was charged with drawing six other instrumentalists into this meditative triptych, and his gravitational pull on his colleagues — flute, clarinet, violin, piano, harp, and percussion — was forceful and expressive. 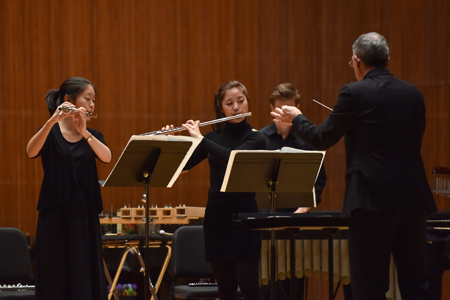 Elizabeth Ogonek is serving as a visiting assistant professor in composition at Oberlin, and as a composer-in-residence with Riccardo Muti and the Chicago Symphony. Her 2011 piece all streams reach the sea at last, for two flutes, piano, and two percussionists, was composed for eighth blackbird and meditates on a verse associated with a fountain on the University Park campus of the University of Southern California. Varied timbres were provided by Aram Mun and Erica Zheng — who switched between flute, piccolo, and alto flute — and by Jackson Short and Daniel King, who managed a long list of percussion sounds. King was featured in an unplanned bit of choreography at the end: looking around nervously for the whip that ends the piece, King finally spied it on a rack behind him and raced over to snatch it up and give the piece its final whack right on time. Maybe Ogonek should write that into the piece.

Also written for eighth blackbird, Eastman faculty composer Carlos Sanchez-Gutierrez’s Five Memos from 2010 deal either with “a single musical concept or a pair of opposites.” The titles are colorful: “Esattezza” or Exactitude, “Gli Uccellini del Signor Tic-Tac” or Mr. Tic-Tac’s Little Birds, “Leggerezza (Mandala)” or Lightness (Mandala), and “Rapidità” or Speed — the last a concept that brought the program full-circle.

Supported by engagingly, yet simple staging by Cara Consilvio, a well-prepared cast of singers told the archetypal story of Cinderella with charm and flair. Framing the production was  a sparse but colorful set and wonderful lighting by Dave Brooks. END_OF_DOCUMENT_TOKEN_TO_BE_REPLACED

END_OF_DOCUMENT_TOKEN_TO_BE_REPLACED

The music isn’t easy to play, either. Over the course of two hours, all of the musicians brought fantastic focus to the unrelenting tricky rhythms and countless layers of parts, all of which require a high level of individual responsibility. Even in the moments of calm, the accompaniment remains perpetually unsettled. Adams — who made a sprightly presence on the podium — combines minimalist, repeating motives in gradual layers, which eventually become so dense they overwhelm the senses. Lisa Wong deserves special mention for her thorough preparation of the Cleveland Orchestra Chorus, as does Jennifer Rozsa for the Children’s Chorus, which made a brief but memorable appearance in the last few minutes. END_OF_DOCUMENT_TOKEN_TO_BE_REPLACED