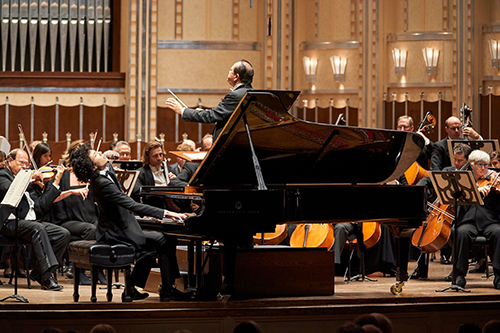 Because contestants’ repertoire is selected well before the finalists get chosen, it’s always a cliff-hanger to see not only who makes it to the final round in the Thomas and Evon Cooper Competition, but what pieces they’ll be playing. As it turned out this year in Oberlin’s biennial piano competition, three separate works were on the docket for Friday evening’s finals with Jahja Ling and The Cleveland Orchestra at Severance Hall on July 20 — both of the Chopin concertos and Tchaikovsky’s first.

As Oberlin Conservatory dean Andrea Kalyn suggested in her welcoming remarks, the generous cash prizes are certainly a draw for the Cooper, but the opportunity to perform with the finest orchestra on the planet is its own award. The three pianists who remained in the original draw of 31 had earned that privilege and made the most of their half-hours on the stage.

The first half of the evening was devoted to the two Chopin works. 17-year-old Kai-Min Chang from Taiwan led off with No. 1 in e minor, followed by 14-year-old Yunchan Lim from Korea with No. 2 in f minor.

One challenge the Chopin pieces present is shaping the composer’s extravagant filigree — written with his own fingers in mind — into musically coherent phrases that have shape and direction. Another is to interact closely with conductor and orchestra so that the ensemble is tight, transitions are tidy, and musical conversations between the pianist and soloists in the orchestra that are written into the score actually take place.

Both Chopin soloists performed with poise and note-perfect technique. Chang’s phrasing was more regimented, Lim’s purposeful yet supple. Both demonstrated some understandable inexperience performing with orchestra. Chang sometimes forged ahead without paying much attention to Ling or his instrumental colleagues. Lim checked in frequently, but occasionally reached cadence points a bit out of sync with the rest of the ensemble.

If the long first movements were difficult to organize, both pianists relaxed and allowed the music to breathe in the slow movements. Chopin pre-determined the shape of the two finales by casting them in the form of rondos based on Polish folk dances — a Krakowiak in the first concerto, a Mazurka in the second. Chang and Lim took to them with obvious delight, playing with buoyancy and verve. 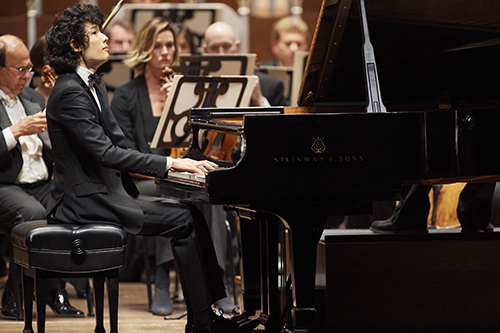 After intermission, the famous opening gestures of Tchaikovsky’s First Concerto heralded a bravura performance of the work by 17-year-old Tony Siqi Yun of Toronto, Canada, who brought his strong technical prowess, abundant flair, and engaging stage personality to the task.

Yun’s tasteful flamboyance matched up well with Tchaikovsky’s score. While his volleys of double octaves weren’t always tidy, his playing was continuously exciting where it mattered, and meltingly expressive when the composer took a different tack. Overall, Yun opted to maintain a big, monochrome palette of sound rather than searching for a variety of color, and in this concerto that plan worked. The beaming young soloist connected with the audience during his gracious acknowledgement of applause as surely as he had from the keyboard. 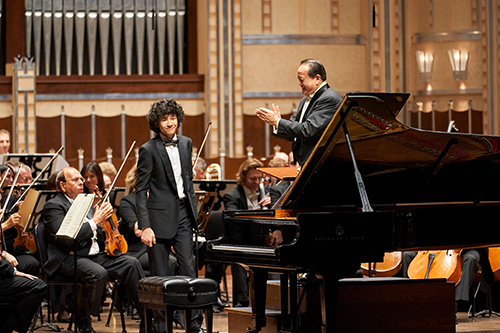 Plenty of different musical hues were on display throughout the evening courtesy of The Cleveland Orchestra, who took their job seriously and played for student soloists with the same care as they would for world-class soloists on a subscription concert. Ling was both professional and avuncular, demanding a high standard from the soloists as well as quietly fixing little details to show them off in their best light.

Severance Hall photos by Roger Mastroianni. Chang & Lim photos from the Recital Round at Oberlin by Yevhen Gulenko.

Jackson began the program with a recitation of Langston Hughes’ poem “Helen Keller” — the first of five poems by Hughes that served as interludes between each piece on the first half. END_OF_DOCUMENT_TOKEN_TO_BE_REPLACED

Pianos with pins and tape on strings, a bass drum and tam tam, crotales, Almglocken, and vibes. Microphones were hooked up all around the instruments. The feed was sent to speakers around the room. Lighting designer Nicholas Houfek hung incandescent globes over the arrangement of instruments from thin black wires stretching across the beams. END_OF_DOCUMENT_TOKEN_TO_BE_REPLACED

From the podium, Elim Chan set an ambitious tone for the evening. The rising star conductor, here in her Cleveland Orchestra debut, has a commanding style, and every twist and turn in Saturday’s performance tracked closely with her baton. END_OF_DOCUMENT_TOKEN_TO_BE_REPLACED