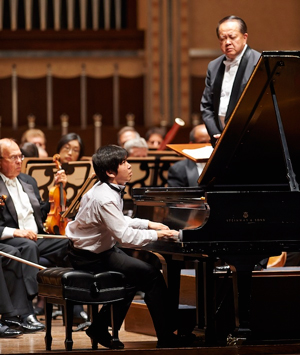 Cleveland – July 26. Following the final round of the Oberlin Cooper Piano Competition with Jahja Ling and The Cleveland Orchestra at Severance Hall on Friday evening, Dean Andrea Kalyn of the Oberlin Conservatory introduced the judges and thanked numerous individuals who had made the competition possible. Then, competition sponsors Thomas and Evon Cooper announced the decision of the judges and awarded the three top prizes.

First place and a cash prize of $10,000 went to Tony Yike Yang of Toronto, who appeared last on the program with Tchaikovsky’s first concerto. Zitong Wang of Inner Mongolia, China, won second place and $6,000 for her performance of Prokofiev’s third concerto. And Sae Yoon Chon of Seoul, South Korea, received the third place award of $3,000, having opened the evening with Beethoven’s fifth concerto.The finals were broadcast live by WCLV, 104.9 FM and via the internet on wclv.com.

END_OF_DOCUMENT_TOKEN_TO_BE_REPLACED

The strings-only work by Berg has made relatively frequent appearances on the Orchestra’s programs. In 2021, the musicians recorded it for the In Focus series, and it appeared again on last year’s European tour. Friday’s rendition maintained the group’s characteristic light and effortless playing, each section blending as much as possible to echo the work’s original form as a string quartet. At fifteen minutes total, the piece is quite short, but the dense encoded musical meanings require some extra-attentive listening. Splitting up the three movements ensured that each one could be appreciated on its own. END_OF_DOCUMENT_TOKEN_TO_BE_REPLACED