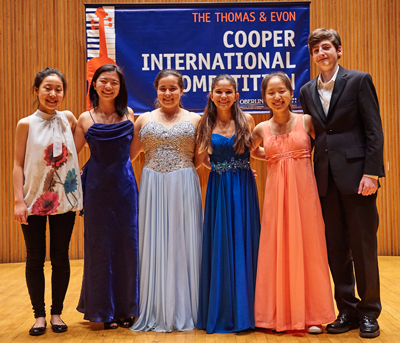 The pressure was on in Warner Concert Hall at the Oberlin Conservatory of Music on Wednesday evening, July 29, when six young violinists played 30-minute recitals to determine who would advance to perform concertos with Jahja Ling and The Cleveland Orchestra on Friday, July 31 at 8:00 pm in Severance Hall. The concert, hosted by Jacqueline Gerber, and emceed by Robert Conrad, was carried live over WCLV, 104.9 FM and wclv.com.

The teen-aged contestants were allowed to choose their own repertory for this round, which resulted in a variety of pieces in different styles — although many favored the kind of dazzling showpieces that often get played as encores.

First up was Karisa Chiu, 16, from Palatine, Illinois, who brought a splendid collaborative pianist along — her mother, Inah Chiu. Her first offering was a vivacious performance of the Presto movement from Beethoven’s Sonata No. 4 in a, Op. 23, played with humor, nuance, and lively accents. Her sultry reading of Maurice Ravel’s Tzigane sounded improvisatory if a bit solemn, but she displayed a well-centered tone and an easy virtuosity. Chiu beautifully controlled her vibrato in the “Siciliana” from J.S. Bach’s unaccompanied Sonata No. 2, although she might have given more prominence to its dance rhythm. Chiu took Wieniawski’s Polonaise Brilliante in D, Opus 4, rather more seriously than it deserves. She nailed its technical challenges, made some passages delightfully playful, and produced impressive, whistling harmonics.

15-year-old Belle Ting from Taipei, Taiwan, was completely unfazed by a heavy rainstorm that beat against the hall’s windows during her playing of the Adagio from Mozart’s Concerto No. 3, K. 216. She conceived her beautifully controlled performance on an introspective scale that drew the listeners to the edge of their seats, and not just because of the torrent outside. Ting displayed a more extroverted intensity in Wieniawaski’s Fantasy on Themes from Gounod’s Faust, without allowing her tone to become plummy. She played up the subtleties of the piece, which is really a medley of tunes, sentimental in character, including a delicate waltz where harmonics enter into a dialogue with lower pitches. Ting saved her energy for a big, thrilling conclusion. Sibelius’s Mazurka, Op. 81, No. 1, served as a programmed encore, strong and spirited. Throughout the set, Ting and pianist Roberta Whitely operated as a tight musical team

18-year-old Gallia Kastner (from Arlington, Illinois) has competed in all three Cooper Violin Competitions — her first at the age of 14. She has matured beautifully as a player over those years, and well-developed tone, fine intonation, thoughtful pacing, and masterful interpretation distinguished her performance of Saint-Saëns’s Introduction and Rondo Capriccioso. The perpetual-motion coda was particularly impressive. In the Adagio from Mozart’s Concerto No. 5, K. 218, Kastner played with an admirable purity of tone and expertly shaped its expressive lines. The cadenza was flawless. Although the opening gesture of Franz Waxman’s Carmen Fantasie was a bit on the wild side, Kastner and her splendid collaborative pianist, Nelson Padgett, soon brought the work into sharp focus. A spell of wonderful harmonics led to a bravura ending.

Following his stunning performance of the Shostakovich concerto on Tuesday, 15-year-old Joshua Brown (from Gurnee, Illinois) proved on Wednesday evening that he is accomplished in a variety of musical styles. He began with an awe-inspiring performance of Paganini’s Caprice No. 24 that suggested he has a musician with decades of experience living inside him. His soulful and sensitive interpretation of the slow movement from Mozart’s Concerto No. 3, K. 216 showed that he has an opera singer in residence there as well. The cadenza was breathtaking. His opening flourishes in Waxman’s Carmen Fantasie were agile and athletic. Throughout the work, he tossed off wild technical passages with nimble dexterity, never taking leave of his full, clear, sound, pointed articulations, and spot-on pitch. The “Habanera” was sultry (that inner diva came to the fore once again). Throughout his set, his collaboration with pianist Nelson Padgett was perfect. This was a performance to sit back and enjoy.

Alice Haekyo Lee (15, from Toronto, Ontario, Canada) began with the Allegro con brio from Beethoven’s Sonata No. 1 in D, a stylish and powerfully expressive performance characterized by a sense of playfulness, subtle mood and dynamic changes, and smooth negotiation of technical passages. Lee and her excellent pianist, Alicja Basinska, operated from a single playbook. She followed with a heartfelt account of the Andante from Bach’s unaccompanied Sonata No. 2 featuring fine bow control and beautiful phrasing. Sarasate’s Carmen Concert Fantasy, really a medley of Bizet tunes, brought out Lee’s full, rich sound and ability to play flashy technical passages with great showmanship. The piece sped to the end in an impressive flurry of notes.

The session ended in a truly impressive fashion with a performance of Bach, Wieniawski, and Ysaÿe by 15-year-old Maya Anjali Buchanan of Rapid City, South Dakota, who brought her own excellent pianist, Laura Kennedy, to the competition. Buchanan began with a steady, assured, and well-phrased performance of the Presto from J.S. Bach’s unaccompanied Sonata No. 1, retaining a lovely tone even at a break-neck tempo. She played Wieniawski’s Faust fantasy with a fully-focused, singing tone quality in every register, made good dynamic changes, and highlighted the work’s many moods. Whether those were fanciful, playful or humorous, Buchanan played with a touching sense of melody, and impeccable intonation, especially in her harmonics. Stylistically, Ysaÿe’s Caprice d’après l’Etude en forme de Valse de C. Saint-Saëns is not so different from the Wieniawski, and Buchanan displayed similar qualities in her performance. Her interpretation was confident, even if she didn’t completely convey the subtleties of the piece.

END_OF_DOCUMENT_TOKEN_TO_BE_REPLACED

The strings-only work by Berg has made relatively frequent appearances on the Orchestra’s programs. In 2021, the musicians recorded it for the In Focus series, and it appeared again on last year’s European tour. Friday’s rendition maintained the group’s characteristic light and effortless playing, each section blending as much as possible to echo the work’s original form as a string quartet. At fifteen minutes total, the piece is quite short, but the dense encoded musical meanings require some extra-attentive listening. Splitting up the three movements ensured that each one could be appreciated on its own. END_OF_DOCUMENT_TOKEN_TO_BE_REPLACED