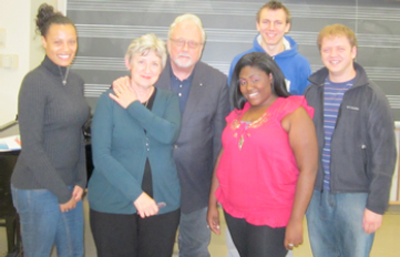 Last week the Oberlin Conservatory of Music’s Opera theatre presented four performances of American composer William Bolcom’s comic opera A Wedding. Bolcom was present for Wednesday’s opening performance as well as to give a talk on Friday about his career and his work in opera. A Wedding was preceded by McTeague, and A View from the Bridge. All three operas were commissioned by Chicago Lyric Opera.

On Thursday morning only minutes prior to an interview on WCPN’s “Around Noon” program, the composer and his long-time performance collaborator and wife, mezzo-soprano Joan Morris, were beaming at the success of the previous night’s opening performance. “I am so pleased with the way it went”, Bolcom said with a smile. “The conductor had the perfect tempos, and that’s always a concern of mine.” Bolcom was soon ushered into the studio with “Around Noon” host Dee Perry, and the two had an engaging conversation about how A Wedding came to be and his about career as a composer and teacher. Although Ms. Morris must have heard these stories before, as well as living many of them, she listened attentively to the interview in the green room, smiling and nodding with affirmation as Bolcom and Perry conversed. “She’s very good” Bolcom said of Perry following the interview, “Very well prepared, and she asked good question.”

A few minutes later, Bolcom, Morris, and Oberlin Conservatory Assistant Director of Communications Jessica Downs and I took our seats for lunch. I quickly realized that this was not going to be just any lunch interview: I found myself seated across from two of the most lovely and charming people you could possibly meet. Both are engaging story tellers who are about to celebrate their 36th wedding anniversary.

Of Bolcom’s many compositions, his Cabaret Songs — written for Joan Morris in collaboration with his long time lyricist, Arnold Weinstein — have become staples of the vocal recital repertoire.

“Tell me about the Cabaret Songs?” The two smiled: “Actually a friend introduced us” Morris says, who at the time was performing regularly with harpist Jay Miller at Peacock Alley at the Waldorf-Astoria in New York. “You’ll like him, he’s a musician” Morris continued. “I’m not looking for an accompanist” she told her friend. “So I finally went to see her at Peacock Alley”, Bolcom said, “And we started a conversation we still haven’t finished”, Morris adds, completing the sentence.

Bolcom and Morris agree that they “skirted” around the topic of working together for some time, but eventually decided to do so, and after receiving a rave review from Michael Steinberg, they were able to approach Sol Hurok for management, who agreed to take them on as a “special attraction.” Since then the two have continued to tour, performing songs of the late 19th-century and into the 1920’s and 30’s.

William Bolcom has had a lifetime attraction to American music, music he has always taken seriously. This attraction has also led to meeting and in many cases working with people like H. Wiley Hitchcock, which led to the writing of a musical review that featured works of the 1920’s, “All the Things They Were”. Later he became involved in the rediscovery of Ragtime after having lunch with a friend who was looking for a score to Scott Joplin’s Opera Treemonisha. That in turn led to his meeting Max Morath, Vera Lawrence and Eubie Blake as well as inspiring him to write his own compositions in the style of Ragtime.

When asked why, after studying in Paris and with Darius Milhaud, did he never lose his attraction to “American Music”, Bolcom goes on to explain that his grandfather was a lumber magnet as was his father, and the family home in Seattle had a music room and over the years pianists like Josef Hoffman and Paderewski had visited and played in it. His mother was a pianist and they went to musicals and there was all kinds of music in the house: “So I never grew up thinking that it was inferior music.”

We continued our lunch as we talked about how he first met Milhaud, and about his thirty-five years teaching composition at the University of Michigan as well as current and future projects with artists like Gil Shaham and Time for Three. “It’s been a totally crazy career. I didn’t set out with the idea of doing it this way.” Bolcom said at the end of lunch. It was the most enjoyable two hours, but I was looking forward to filling in some of the missed details by attending his talk at Oberlin the following day.

Bibbins Hall Room 223 was packed with students and townspeople on Friday noon, including many singers from the cast of A Wedding.

Bolcom started off with the observation that through the course of his three Lyric Opera pieces, he noticed an increase in singers’ ability to make themselves understood in English. “Most singers have been trained with an emphasis on vocal production: they often don’t know the meaning of the texts they’re singing. Evelyn Lear and Joan Morris were the exceptions!” The composer began cultivating singing actors who sounded the same whether they were speaking or singing.

Bolcom recalled his first encounter with Arnold Weinstein’s poetry. That was in Paris, when Darius Milhaud assigned him a Weinstein text to set to music “in a popsy, World War I style”. Composer and lyricist seemed destined to come together. Bolcom noted that this was during the “tonality is dead” era, and he had been playing premieres of highly chromatic pieces of the time. “But I always had an impish urge toward pop. My eighth string quartet had a finale that sounded like variations on ‘Rock-a-my-Soul’, which my teachers criticized for its ‘rupture of styles.’”

Bolcom’s predilection for combining learned and popular styles in his music was actively encouraged by John Cage during a three-hour radio interview. Cage told him “There are people who divide the world into good and bad, and others who take everything in and let the inner organism decide”. Bolcom said, “The scales fell from my eyes.”

The composer soon came to the realization that texts and dramatic characters would themselves suggest the proper musical style that needed to be used. His project to set William Blake’s Songs of Innocence and Songs of Experience in 1956 brought him to use some surprising musical styles. “The ‘Shepherd’s Song’ suggested country western, which I don’t even like!”

He learned something else while orchestrating the Blake set: the idea of writing for people rather than for instruments, a notion suggested by Cecil Forsyth’s Orchestration (Bolcom wrote the preface for the Dover reprint of Forsyth’s treatise). This permitted him to find a direct connection with the performers.

A set of “Cabaret Operas” he wrote for Yale led to an invitation from Ardis Krainik, the head of Lyric Opera Chicago to write a piece for that company. In casting about for a subject, he heard Alban Berg’s Lulu with “a singer who acts”, which put him and Arnold Weinstein on the path that led to McTeague. Bolcom’s second Lyric piece was an adaptation of Arthur Miller’s A View from the Bridge in which Weinstein demonstrated his ability to make “draconian cuts” in libretti.

A Wedding, the third Lyric Opera commission, was inspired by Robert Altman’s film of the same name, but had a huge cast that even challenged Weinstein’s ability to trim material. “We cut it down from 48 characters to 16, which was still large but OK with Lyric because it was a 50th anniversary show. 16 principals works fine for German repertory houses and schools — like Oberlin.”

That’s as far as we got before William Bolcom glanced at the clock and said “oops, it’s 1:30, we have to quit!” But he and Joan Morris graciously hung around to greet cast members who were thrilled to have him sign their posters and vocal scores.

“Mary’s Song” refers to the Magnificat (“My soul doth magnify the Lord”), sung by the soon-to-be mother of Jesus in response to the message the angel Gabriel delivered to her in the Gospel according to Luke. The text has been set countless times by composers in all eras, largely because the Magnificat is one of the invariable texts in the daily service of Vespers, as well as its Anglican relative, Choral Evensong. END_OF_DOCUMENT_TOKEN_TO_BE_REPLACED

Music director and conductor Daniel Meyer built his playlist around Cleveland themes and scenes. “Exploration CLE” made use of engaging selections from the classical canon and beyond that celebrated “what makes Cleveland so special.” Happily, he and his musicians avoided constructing a visual slide show, choosing to let the music speak for itself. END_OF_DOCUMENT_TOKEN_TO_BE_REPLACED

You could see the relationship at work on a practical level. Repertoire for two players at the same piano requires a certain choreography. There’s just one of each pedal to share, and the hand crossings left and right — which can be so fun to watch a soloist pull off — get more complicated when another person’s involved. At times, Pompa-Baldi drew a hand away from the keyboard and into his body, making room for Friscioni, and at the close of a few delicate phrases, the two were crouched together over the same final notes at one end of the instrument. END_OF_DOCUMENT_TOKEN_TO_BE_REPLACED