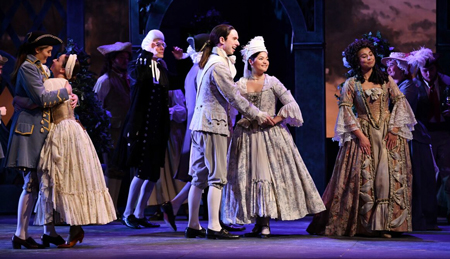 What does it take to create a sparkling production of Mozart’s opera buffa The Marriage of Figaro? The music, of course, comes first, and you need a fine group of vocalists to put the composer’s engaging arias and brilliant finales across, a flexible conductor and orchestra in the pit, and a sure hand at the keyboard for recitatives.

Since it’s a comedy, you need singer-actors who can put across the jokes and bring out the many twists and turns of the plot. It helps to have stage sets and costume designs that support the libretto and music without calling too much attention to themselves. Finally, you need a canny stage director who has the oversight to bring everything together into a coherent whole. All of these elements were firmly in place on Friday evening when Oberlin Opera Theater brought a delightful production of Figaro to the stage of Hall Auditorium.

Conductor Raphael Jiménez and the Oberlin Chamber Orchestra sparked the evening off with a tight and lively account of the overture. Then the curtain rose and Jeremy K. Benjamin’s lights came up on Laura Carlson-Tarantowski’s attractive period set (intentionally tatty for Act One) and Chris Flaharty’s handsome period costume designs, setting the scene for uniformly strong singing and acting by the Friday-Sunday cast. 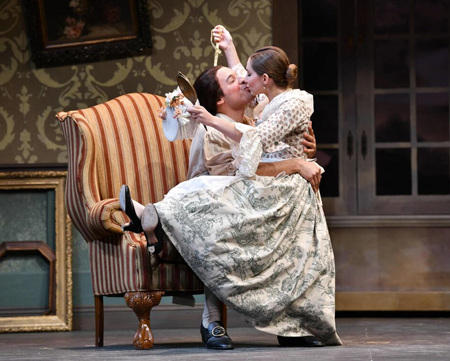 Cory McGee’s Figaro and Amy Weintraub’s Susanna were casting success stories both as actors and singers. Elana Bell created a believably masculine Cherubino — appropriately randy and mischievous, but delightfully awkward when got up as a woman in a hoop skirt. (That amounts to a trouser role turned into a dress role, but this is opera, so never mind.)

The chorus, prepared by Gregory Ristow, made a fine impression in their cameo appearances. Stage director Jonathon Field arranged cast and chorus in natural patterns, adding amusing touches like having the village folk fawningly bestow individual flowers on the Countess, then snatch them up one-by-one in disgust. Field saved his signature surprises for the Third-Act finale, when the leads each contributed a little personal break dance to the festivities.

Supertitles for this production were serviceable, if laden with typos and projected so high above the set that necks got a workout keeping up with the text. And did we mention the wigs? In a period production, you’ve got to have them, and Rae Phillips supplied some stunning ones. 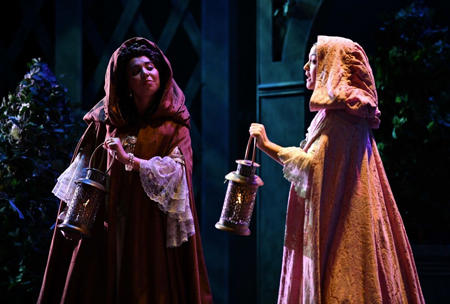 Figaro is a long show. Even with the cuts that seem to have been made in this production, the Oberlin production lasted three and a half hours from stem to stern. Most of it sailed along nicely, but there were a few saggy moments when tempos might have been just a click or two peppier.

In the end, after some rather amazing wrinkles in the plot get ironed out, Figaro and Susanna, and Bartolo and Marcellina are free to get married — the obligatory happy outcome in Mozart comic operas — and forgiving each other, the Count and Countess are reconciled. That’s a much happier fate than, say, Don Giovanni’s. Let the festivities begin!

The cimbalom was the feature of the show, an instrument capable of taking on many personas. Its performer, Chester Englander, has shaped his career around the instrument, and has inspired composers to write more repertoire for it, some of which was presented on the program. END_OF_DOCUMENT_TOKEN_TO_BE_REPLACED

You wouldn’t expect that acoustic from a glance at the nave, which is wide and long, but not especially lofty. But when I guest conducted a local amateur choir and professional orchestra in Beethoven’s Mass in C there a few years back, during the first rehearsal we released the final chord of the “Gloria” and listened in astonishment for the next several seconds. The sound continued to roll down the space like the big wave that surfers dream about. END_OF_DOCUMENT_TOKEN_TO_BE_REPLACED