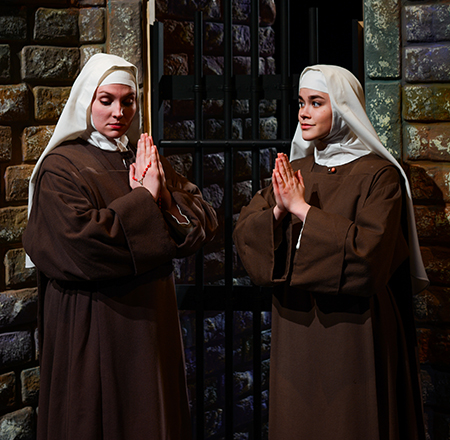 Francis Poulenc’s The Dialogues of the Carmelites recounts a fictionalized version of the story of the Martyrs of Compiègne, Carmelite nuns who, during the closing days of the Reign of Terror, were guillotined in Paris for refusing to renounce their vocation.

Beginning on Wednesday, March 13 at 8:00 pm in Hall Auditorium, Oberlin Opera Theater will present the first of four performances of Poulenc’s haunting opera. Performances continue on Thursday and Friday at 8:00 and on Sunday at 2:00 pm. Tickets are available online.

“It’s a fascinating piece,” director Jonathon Field said during a telephone conversation. “Poulenc’s music is phenomenal and describes the dramatic situation quite well. I think that’s why it keeps getting produced over and over again by opera companies around the world.”

Poulenc’s libretto is based on the play of the same name by Georges Bernanos, based on Gertud von Le Fort’s novella Die Letzte am Schafott (The Last on the Scaffold). The opera’s focuses on the journey of faith by the young Blanche de la Force, the daughter of a French aristocrat, who joins the convent to escape the horrors of the real world. While Blanche’s doubts cause her to abandon her sister nuns, in the end she returns to the convent to join them in their final sacrifice.

Ultimately, Field said the opera is two things — a love story and a mystery. “It’s the love that the nuns have for God and their devotion  to a life of prayer. And hey are willing to go to the scaffold for that love. It’s a mystery because the characters have to figure out if their actions are what God wants or what they want.” 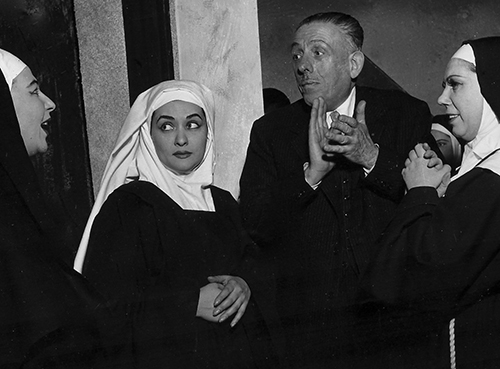 Poulenc and his Carmelites.

Field noted that the story also touches on the theme of stripping away one’s identity in order to achieve enlightenment. “Of course all of this is predicated on the belief in a higher supreme being. But I think even the audience members who do not share those values will still be deeply affected by this piece, because of how these women stand firm in the face of that oppression, and how they stay together as a community.”

In view of the fact that Dialogues is a docudrama, Field and his creative team have made a concentrated effort to focus on the story’s original source. “We’ve had representatives from the Catholic church in to talk to the students about what revolutionary France was like for those who were trying to achieve the dedicated life of a religious calling. I’ve also shared articles and research about that period, and gave people a copy of the original short story. I think that has been very effective for them.”

Historically speaking, Field pointed out that the Carmelite nuns was a communal organization and voted whether to give up their faith or go to the guillotine. “They hoped that the sacrifice would thereby heal France. And oddly enough, about ten days to two weeks after their deaths, Maximilien Robespierre was put to death, and the Reign of Terror began to end.” 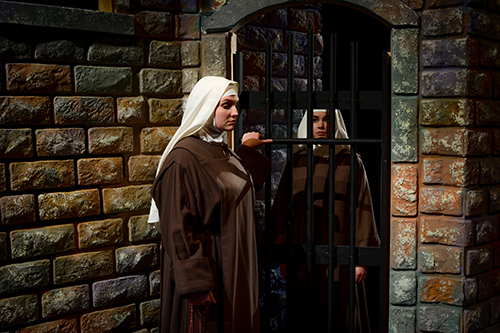 How does the story  Dialogues speak today’s world? “It’s relevant in that one can remain passionately committed to an ideal and yet not bring willful harm on the other party — or the side that one perceives to be the enemy,” Field said. “And I think that is important for all for us to remember.”

The Oberlin production will be sung in French with English subtitles. “The diction coach is Tony Cho, who’s wonderful, and the conductor, Christopher Larkin, has led many productions of this opera, so I feel like I am in good hands.”

Field said that he is finding the experience of working on Dialogues to be delightful. “This is my first time directing the opera and I’m enjoying it. It offers so many opportunities for interpretation. And now I will have directed every opera that Poulenc wrote. I read somewhere that he was a combination of a brat and a monk, and that seems to sum things up really well. He was inclined to silliness and thumbing his nose at various establishment figures. He was also a deeply devoted and spiritual person, and as we see in La voix humaine, he had a deep understanding of people and what made them tick.

Northeast Ohio’s Les Délices has long been that rarest of beasts: a world-class organization so proud of its region (ours) and repertoire (distinct niches in pre-1800 music) that it never tries to be everything to everyone, paradoxically making a strong case for a broad, curious international following. In the December episode of its SalonEra series, the ensemble embraces its strengths and community to marvelous effect. END_OF_DOCUMENT_TOKEN_TO_BE_REPLACED

END_OF_DOCUMENT_TOKEN_TO_BE_REPLACED

Another I remember fondly is Gian Carlo Menotti’s Amahl and the Night Visitors.  Commissioned by NBC, the one act, made-for-television opera, premiered on December 24, 1951, at the network’s studios in New York’s Rockefeller Center. And now, through the wonders of technology, Cleveland Opera Theater has created a magical new production of the work which is available on demand through January 6, 2021 (Three Kings Day). END_OF_DOCUMENT_TOKEN_TO_BE_REPLACED

Jessen has now followed up with her second solo CD, Winter Chapel. Recorded on January 17, 2020 in Oberlin College’s Fairchild Chapel and available on Carrier Records, the album is a continuum in Jessen’s journey to push the musical boundaries of her instrument and herself as an improviser. END_OF_DOCUMENT_TOKEN_TO_BE_REPLACED