Lady Gaga’s meat dress is now on display at the Rock and Roll Hall of Fame. What a shame that the matching headpiece, clutch, and heels (also made of raw meat) to the sirloin sensation that the pop singer wore to an awards ceremony in 2010 didn’t make it to the exhibit. I guess a morals-challenging raw meat concoction is what it takes to get people talking in the 21st century. It also appears that not everyone hated it because people are actually making their way to the museum to get a look at the newly taxidermied dress, which now, in effect, looks nothing like what the idiosyncratic singer actually wore that day.

This is the type of century we live in, whether you find it revolting or intriguing. Social networks define human interaction; it is the age of digital media and a booming pop culture. It is a time where people aren’t afraid to express themselves and controversy is no longer an element of surprise. How, then, does a world-renowned classical pianist wearing a mini skirt on stage fit into all of this?

Despite her ever-blossoming international career, superhuman technique, luscious sound, quickly growing album collection, and recent Grammy award nomination, what people mostly talk about nowadays when hearing the name “Yuja Wang” is her affinity for tight, short dresses and stilettos. The beautiful 24-year old pianist is not to be blamed for her natural girly inclinations toward flattering dresses that tickle her feminine fancy, but grace the concert hall with those and you have the critics raving. Many audiences and critics do not find Wang’s shoulder and thigh-revealing numbers a suitable garnish to a program of Scriabin etudes or Rachmaninoff’s . 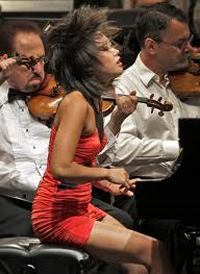 The zesty orange dress and glittery gold heels (open toe-sandals, might I add) that the pianist wore to her recent Hollywood Bowl performance in August of 2011 stirred up the emotions of critics and audiences, touching off a marathon of reviews and blogs filled with mixed reactions and questions of decency. The piece suited a simmering California summer’s night, but Wang also looked ready for a fun time out in Hollywood after playing—a two-in-one function dress for the night, perhaps. Audiences gaped, wondering, “what,” “why,” “how,” and “seriously?”

Had Yuja Wang stood next to Lady Gaga or Beyoncé during one of their own concerts, she would have looked nothing out of the ordinary. It is true, nonetheless, that pop music and classical music thrive in completely different realms, each a different ball game with its own set of rules and uniforms. As a classical musician, Wang definitely lingered at the borderlines of typical dress in her field. It is unfair, however, to judge the length of the hemline as inversely proportional to the competence or integrity of the performer. She’s young, fashion-forward, and has a flattering figure that fits into those snug outfits like a glove. What Wang was wearing was certainly a shocker at first, but only because it was unconventional in terms of what you usually see a female pianist wear on stage. Regardless, it was a festive outfit that showed off that she is a young and confident woman.

As the parameters of “propriety” and “exposure” in dress for women have gradually loosened over time, it is interesting to contemplate what actually defines the perfect mix of “appropriate” and “aesthetically pleasing” on the classical concert stage. Had Wang worn a burka instead, would audiences have criticized her for being too covered up? The visual aspect in a musical performance is an unavoidable part of the concert experience, whether it be for better or for worse. 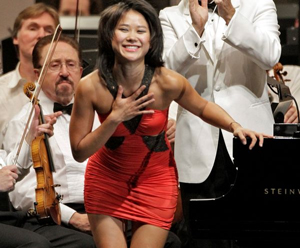 In technical terms, did this potentially hazardous outfit atop sky-high stilettos detract from the quality of Wang’s performance? That Wang did not lose her balance when pedaling (or even when strutting onstage) and still showed comfort and mobility while storming up and down the keyboard in a form-fitting number is an admirable feat in itself. LA Times critic Mark Swed had a handful of adulations about Wang’s performance that night of the grueling 3rd Concerto of Rachmaninoff. He talked about how she actually shone in the most difficult of passages and never lost her cool and poise. The young virtuoso’s wardrobe “malfunction,” in the eyes of some, actually presented no malfunction at all. The only malfunction lay in the audience members who couldn’t shift focus from what she was wearing to what she was playing. Clearly, she is capable of delivering top-notch performances whether she is dressed in a mini skirt or not.

Anything arousing or provocative that pokes at conventional norms or shakes up the status quo immediately initiates a defensive reaction in people. But is it a crime for a classical artist to be—dare I say the word—sexy? Is it possible for “sexy” and “classical music” to go hand in hand?

That her wardrobe lies outside of traditional dress is a symbol of the new generation of the concert artist. To be a young professional in an art form that is dominated by custom and tradition, definitely creates friction. Classical music is a ritualistic art by nature, where people of the 21st century are still captivated by and are actively in pursuit of the music of composers who died even centuries ago. People are still playing Mozart and Brahms in a generation where Schoenberg’s twelve-tone row is something of the past and Lady Gaga reigns as the diva supreme. It is also an inevitable fact that the present-day ambassadors of classical music are living in such a 21st century, and that the new generation of classical musicians are ones who grew up listening to rap and electro alongside Bach and Bruckner on their iPods. Because of this coexistence between the “old and the new,” performance practices, musical interpretation, music research, music education, concert-going practices, the concert hall—all of these elements are constantly undergoing change.

Yuja Wang is a fresh, young ambassador of classical music in the midst of an ever-changing, modernizing culture. A flirtatious orange dress should not be seen as a faux pas, but as another expression of the pianist as a person alongside her music. She rocked the look. She “Rach-ed” the music. What is there to complain about? Besides, no poor cow was sacrificed in the process.

Susan Lee, born and raised in Los Angeles, California, finds that service and performance have always gone hand in hand. The 22-year-old pianist began training with her mother at age 5, and volunteered and performed in retirement homes across L.A. during her high school years.

At the Oberlin Conservatory, where she is a piano performance scholarship student with Professor Haewon Song, Lee has taught private piano lessons for students in the Conservatory and College of Arts and Sciences, as well as community members, since her freshman year. Her teaching and volunteering experience also includes tutoring math at Oberlin’s Prospect Elementary School.

As a performer, Lee has won numerous competitions throughout Southern California and has participated in master classes with renowned pianists such as Menahem Pressler, André Laplante, and Daniel Epstein, among others. During the summers, Susan has participated in the ARIA International Summer Academy, the Toronto Summer Music Academy and Festival, and the Casalmaggiore International Festival in Italy. She has been named one of ten Rubin Fellows who will participate in Oberlin’s Rubin Institute for Musical Criticism in January.