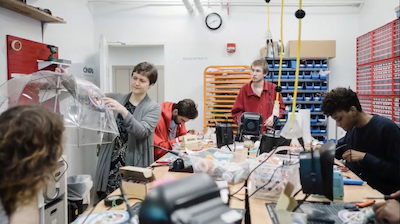 A group of students at Oberlin College and Conservatory are spreading gratitude and raising funds for healthcare professionals at University Hospitals Elyria Medical Center, all in a distinctly creative way.

On Monday evening, the Gratitude Showers Challenge kicked off with a broadcast on YouTube from 7:15 to 10:00 pm. I watched the first 40 minutes, which began with Abby Aresty and her students in the course Sonic Arts in Society explaining their project and how people can participate.

Stated most simply, they’re gathering notes of gratitude — a few words, or even a picture — from the public that will then be shared with hospital workers. They’re also asking for donations of $1 for each message received, up to their goal of 100 messages.

The messages will be written out on raindrop-shaped cuts of vinyl, and once it is deemed safe, installed on clear umbrellas that will make up an art installation in a courtyard at the Hospital. 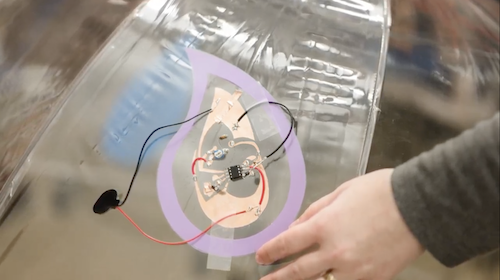 Michael Gaspari, one of four student research assistants supporting the class, was responsible for a short video about the project that was played during Monday’s broadcast, and is available on the project’s website. It includes animations and original music — ethereal sounds that brilliantly and subtly capture the metaphor of this whole project: sunshine in rainy times, and the balance between sadness and gratitude.

“We all tried to convey the complicated feeling of having hope during dark times,” Gaspari told Erich Burnett for an article on Oberlin’s website. (That article also delves more deeply into the complicated path this initiative has taken — born out of a Winter Term Project, and adapted during the COVID-19 pandemic.)

A second piece of music shared during the broadcast also came with a complex history — one that also involves umbrellas.

Recently, the Sonic Arts in Society class visited through Zoom with a local children’s choir, the Oberlin Choristers Cantate Musica Ensemble, and began collecting messages of gratitude. That was not Aresty’s first contact with the Choristers. Last fall, students in another course she teaches visited the children and recorded them making different rain sounds, to be played from small speakers attached to umbrellas.

Gaspari and another student research assistant, Maya McCollum, then created a video with music composed of edited versions of the children’s rain sounds, set against images of their hand-made sundrops. The impressive result is a hypnotic, groovy, percussive arc of sounds undergirded by a deep, imposing bass line.

As of Monday night, Aresty’s class has collected 40 sundrop messages out of their goal of 100. Messages can be submitted via the project’s website or the Twitter handle @GratefulShowers.

If you’d like to make your own sundrop, watch this tutorial video.

Published on ClevelandClassical.com May 5, 2020.

END_OF_DOCUMENT_TOKEN_TO_BE_REPLACED

A new CD by Christa Rakich, who is currently Visiting Professor of Organ at the Oberlin Conservatory, gives a nod in two directions. As its title announces, it’s an homage to her former teacher and colleague, the late Yuko Hayashi, longtime professor at the New England Conservatory and curator of Boston’s Old West Church Organ Series. It’s also the first recording to be made of Richards, Fowkes & Co.’s Opus 16 instrument, built in 2008 for Goodson Chapel of the Duke Divinity School in Durham, North Carolina. END_OF_DOCUMENT_TOKEN_TO_BE_REPLACED

END_OF_DOCUMENT_TOKEN_TO_BE_REPLACED

Hailed by the New York Times as “The Best Classical Music Ensemble of 2018,” Wet Ink Ensemble has lived up to this acclaim once again with their recent release Glossolalia/Lines on Black. The album takes its name from the two extended works by Wet Ink members Alex Mincek (saxophone) and Sam Pluta (electronics). The remainder of the septet includes Eric Wubbels (piano), Erin Lesser (flutes), Ian Antonio (percussion), Josh Modney (violin), and Kate Soper (voice). END_OF_DOCUMENT_TOKEN_TO_BE_REPLACED

Croatian-born pianist Martina Filjak, now living in Berlin, has released her latest album, Light and Darkness, featuring music by Franz Liszt — plus an epilogue by Arvo Pärt. The disc confirms once again all the special technical and interpretive qualities that won her the gold medal at the Cleveland International Piano Competition in 2009. END_OF_DOCUMENT_TOKEN_TO_BE_REPLACED