If you’ve never quite understood all the fuss about Gilbert & Sullivan, then you owe it to yourself to see Ohio Light Opera’s production of Iolanthe, in repertory at the College of Wooster through August 9. Do not delay, or you’ll miss one of the most luscious, lighter-than-air confections ever seen.

It begins with a witty version of the “notice to the audience” (please turn off your cell-phones, etc., etc.), written by Artistic Director Steven, in which every syllable is sung with clear enunciation by Stage Director Ted Christopher, who also doubles as the Lord Chancellor. At least he didn’t have to learn a new tune – it’s cleverly sung to the ‘Nightmare Aria,” otherwise known as “Love, Unrequited, Robs Me of My Rest,” from the show’s second act. There simply cannot be a G&S production without a patter song, and this is one of the best!

There was also audience participation when we were all invited to stand and sing “God Save the Queen.” Although the current version is not about the Queen for whom the custom was begun in the 1880s, one could not help but send such supportive wishes to the current monarch.

Considering the heritage of Ohio Light Opera as specialists in the G&S oeuvre, this overall excellence should come as no surprise. Yet, even as it adheres to the original concept, this current version has a new sort of attitude. It’s wickedly funny, colorful, light-hearted, and dazzling, with a gentle blend of satire and snark.

The plot concerns politics. The members of the House of Peers become entangled with a clutch of fairies (the Peri), who are forbidden to indulge in togetherness or else risk banishment — or worse! This happened 24 years earlier when the delightful Iolanthe (Sarah Best) ‘married’ a Peer and bore him a son, Strephon (Stephen Faulk), after which the couple separated. The poor boy is somewhat hampered by the combination of his fairy upper-half and his mortal lower-half. Never-the-less, the local shepherdess Phyllis (Hilary Koolhaven) has fallen to his charms, and the two youngsters wish to marry legally. She needs the consent of her guardian, The Lord Chancellor, but is afraid to ask him.

Strephon approaches his mom for help, and when Phyllis observes the two of them together, she immediately assumes him to be in love with this other woman. (She doesn’t know that fairies don’t age as humans do, and thinks that woman is a challenger to her). The Queen of the Fairies (the energetic Julie Wright Costa) flits around the stage, trying her best to sort this out, until she notices Private Willis (the dashing Cory Clines, 6’6” even before donning the two foot high bearskin headgear) and immediately tumbles into love with him. This does not make much sense, but you’ll enjoy it much more if you don’t expect it to.

The colorful, filmy costumes by Jennifer Ammons cooperate splendidly with the constant, gentle arm movements suggesting the wings of the Peri. The set is by Kim Powers, and easily morphs from a country landscape to the Palace Yard at Westminster, complete with a huge Big Ben clock face suggestive of the nearby House of Lords. Lighting is by Daniel Huston, choreography by Spencer Reese, and the OLO orchestra was conducted by J. Lynn Thompson. The sizeable cast provides lovely choral singing and spirited dancing. 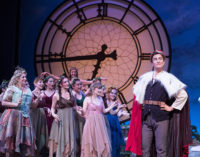 This particular government then proves its newly-responsible attitude by passing a law declaring that all Peers must marry a Peri, thus making all the pairings legal!

Supported by engagingly, yet simple staging by Cara Consilvio, a well-prepared cast of singers told the archetypal story of Cinderella with charm and flair. Framing the production was  a sparse but colorful set and wonderful lighting by Dave Brooks. END_OF_DOCUMENT_TOKEN_TO_BE_REPLACED

END_OF_DOCUMENT_TOKEN_TO_BE_REPLACED

The music isn’t easy to play, either. Over the course of two hours, all of the musicians brought fantastic focus to the unrelenting tricky rhythms and countless layers of parts, all of which require a high level of individual responsibility. Even in the moments of calm, the accompaniment remains perpetually unsettled. Adams — who made a sprightly presence on the podium — combines minimalist, repeating motives in gradual layers, which eventually become so dense they overwhelm the senses. Lisa Wong deserves special mention for her thorough preparation of the Cleveland Orchestra Chorus, as does Jennifer Rozsa for the Children’s Chorus, which made a brief but memorable appearance in the last few minutes. END_OF_DOCUMENT_TOKEN_TO_BE_REPLACED