As a general rule, elevators go up and down, conveying people or goods from one level to another in a given building. The elevator on stage for OLO’s production  of Have a Heart, however, goes backwards. It takes the happy audience (plus cast and crew) straight back to early 1917, and the premiere production of Jerome Kern’s then-new musical. It’s a delightful journey, one you won’t want to miss.

The book and lyrics for this bon-bon were by Guy Bolton and P. G. Wodehouse, and have about as much substance as the lingerie draped around the opening set. If you recognize Wodehouse as the creator of Jeeves then you’ll know you’re in for a rollicking good time! Bolton, believe it or not, was the leader of the trio of creative talent inhabiting New York’s Princess Theater, although he was far better known for his many straight plays.

Unless you’re a major-league devotée of early musical theatre, there aren’t any really familiar tunes to be heard here, but they’re enjoyable just the same. It’s hardly to be wondered that the next few years would see many major other Jerome Kern Broadway triumphs: Sally, Roberta, The Cat and the Fiddle, Very Good Eddie, and the beloved Showboat.

The story line here, such as it is, devolves around Schoonmaker’s, a high-class department store, it’s youngish owner, Ruddy, his former wife Peggy, his possible new love interest and former employee, Dolly Brabazon (now a Hollywood film star), several employees, and Peggy’s aunt and uncle. A bit of of hanky-panky is alluded to but never displayed, as well as a bit of gambling. The gambling activity brings in a detective and a barber-shop quartet (no explanation provided, but they’re all handsome young men who sing the overture very sweetly).

The first act takes place in the ‘Lingerie Room’ at the department store, well-lit and colorful, with the aforementioned elevator in the center of the stage. The elevator is operated by Henry, who seems to be the general dogsbody employee — whatever needs doing, call Henry! In the second act, set at the Ocean View Hotel, we find all the same characters, although some of the store’s employees have now exchanged their uniforms for those of hotel workers. This hotel is a sentimental choice — Ruddy and Peggy spent their honeymoon there. 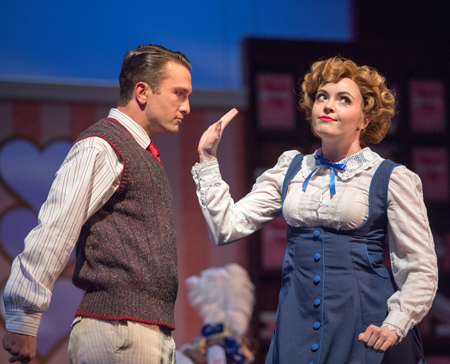 Nathan Brian, who really looks the part, is a wonderful Ruddy Schoonmaker, and Sarah Best, is the beautiful and willowy Peggy, his former (or maybe not) wife. Her aunt and uncle are humorously portrayed by Julie Wright Costa and Mark Snyder. The vivacious Dolly (Tanya Roberts) may once have been frightened by Betty Boop. Emily Hagens charmingly portrays the female undercover agent Lizzie, while Kyle Yampiro is Henry, the man for all tasks and all seasons. The hopeful employee Ted is embodied by Stephen Faulk.

Ted and Lizzie have one of the two most famous songs from Have a Heart: “You Said Something” (when you said you love me) while the other one that’ll tug at your heart is “And I Am All Alone,” as sung by Ruddy and Peggy, who are bemoaning their divorce, which may or may not be finalized. If you can’t hum either tune on your way out of the theater, no matter. That would only dislodge the smile on your face. 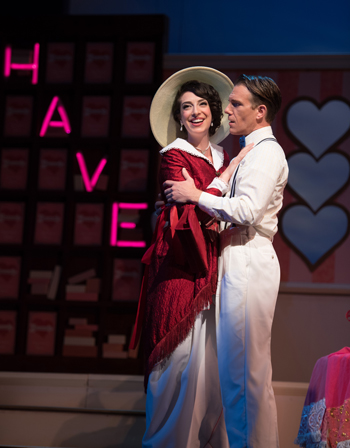 As usual, production values at Ohio Light Opera are superb. The sets by Daniel Hobbs are bright, colorful, and totally believable. Lighting by Brittany Shemuga enhances everything wonderfully, whether in town or at the shore. Hali Hutchison’s costumes range from divine to utilitarian, but are always period-perfect. Constructed from gorgeous fabrics, they still allow room for the dancers to show off their skills.

And do they ever! After the show, audience comments were nearly all about the spectacular dancing. Everybody dances, even Henry, who does a pretty good job of it, too. Spencer Reese, who also plays Owen, one of the employees at the store, is the new choreographer for this season, and his influence cannot be missed. The dancing inspired ovations and shouts after every number.

Have a Heart continues in repertory at OLO through August 13. For ticket information, visit OLO’s website or call the box office at 330.263.2345.

END_OF_DOCUMENT_TOKEN_TO_BE_REPLACED

Rodgers & Hammerstein’s Cinderella was originally produced for television in 1957 — seven years after the animated Disney film was released — and starred Julie Andrews. According to the Rodgers & Hammerstein website, it was viewed by over 100 million people. END_OF_DOCUMENT_TOKEN_TO_BE_REPLACED

The story line has its origin in an 1855 play and an 1842 farce that Thornton Wilder mined for his 1938 play The Merchant of Yonkers. When that turned out to be a flop, in 1954 Wilder made the crucial decision to re-center the show around the character of the legendary marriage broker Dolly Gallagher Levi and renamed it The Matchmaker. END_OF_DOCUMENT_TOKEN_TO_BE_REPLACED

The Dodero Center for the Performing Arts at the Gilmore Academy in Gates Mills is one feature of an impressive campus. The auditorium is shallow, the stage is deep, and the ensemble played without a shell. Throughout the program, the sound, especially in instruments’ lower registers, tended to disappear. END_OF_DOCUMENT_TOKEN_TO_BE_REPLACED