The story line has its origin in an 1855 play and an 1842 farce that Thornton Wilder mined for his 1938 play The Merchant of Yonkers. When that turned out to be a flop, in 1954 Wilder made the crucial decision to re-center the show around the character of the legendary marriage broker Dolly Gallagher Levi and renamed it The Matchmaker. Turned into a musical by Jerry Herman and Michael Stewart and renamed Hello, Dolly!, the show opened in 1964, ran for a then-record of 2,844 performances plus four revivals, and won ten Tony Awards. 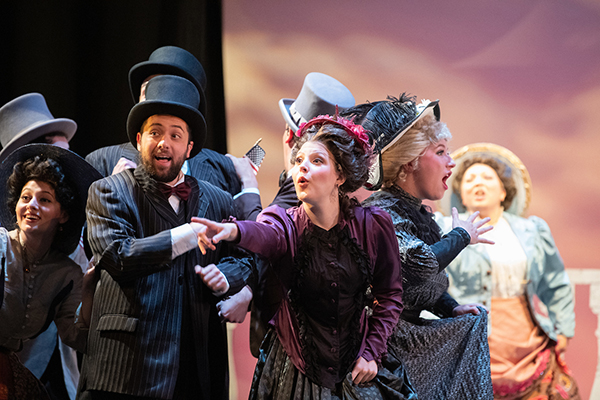 When the curtain rises, we learn that Dolly (played by Michelle Pedersen) has been retained to find a bride for the “half-a-millionaire” widower and Yonkers hay & feed merchant Horace Vandergelder. It turns out that Dolly, herself a widow, is also in the market for a spouse.

Horace is bound for Manhattan to march in a parade, and with Dolly’s assistance, to propose to the milliner Irene Malloy (Sarah Best). His pathetic store assistants Cornelius Hackl (Spencer Reese) and Barnaby Tucker (Jonathan Heller) take advantage of his absence to steal an evening off for an adventure in the city. 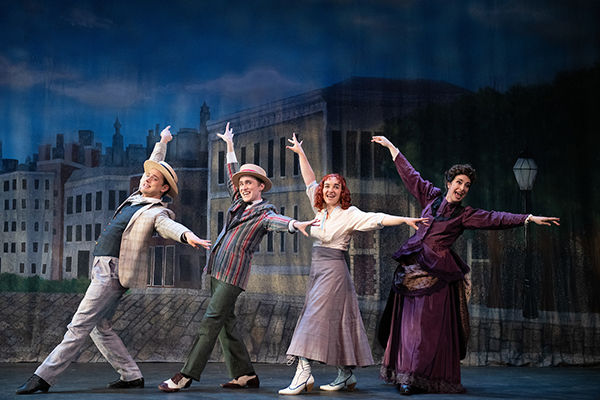 By chance, they all end up in Irene’s shop with her red fright wigged assistant, Minnie Fay (Joelle LaChance), trying to hide from each other. Dolly persuades the motley crew to enter a polka contest at the pricey Harmonia Gardens restaurant.

At this point, something quite magical happened in Wooster. Michelle Pedersen had taken a while to live into her character, but Dolly emerged in full force during the parade scene, and swept the rest of the cast along with her into the restaurant, where the corps of servers treated the matchmaker to a heroine’s welcome in a big production number featuring the title song. This is a show with a single big tune, and the full cast sang it lustily. 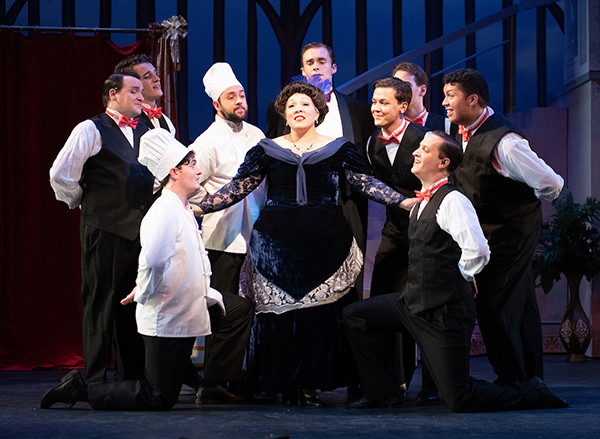 The farce continues — as all good farces do — with layer upon layer of misunderstanding. Finally, switched wallets inspire a meleé that gets everybody hauled off to Night Court. Cornelius declares this the most wonderful night of his life because he met Irene, and Dolly gives an impassioned speech to the judge about love that gets everybody but Horace off the hook for charges. After a bit more drama, couples end up with the partners they’re meant to be with. Horace sets aside his previous protestations about Dolly, and theirs is the last match to be made. 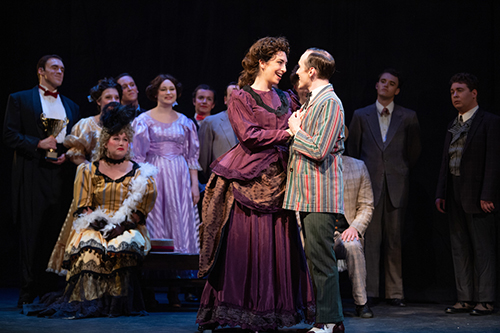 Songs like “The Waiters’ Gallop” were cleverly choreographed (by Spencer Reese) and crisply executed. The sight gags worked, dialogue was clear and understandable, and coordination between the stage and orchestra, led by Wilson Southerland, was excellent. The lighting (Brittany Shemuga) and set design (Kiah Kayser) complemented the beautiful period costuming (Cindy Moon). 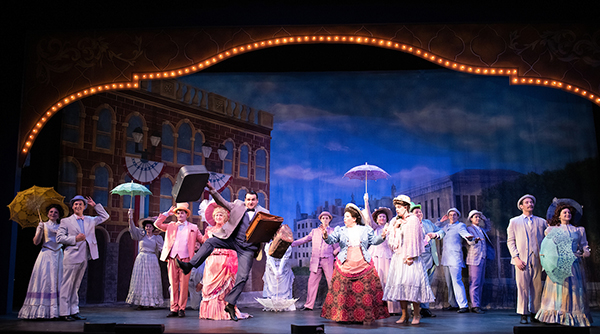 All in all, an excellent show with scarcely any opening performance jitters. Among those who need to be acknowledged: first of all, Thornton Wilder for weaving such a brilliant farce from the material he borrowed, then producer David Merrick for not allowing the show to hit the boards with its original title (Dolly, A Damned Exasperating Woman), and finally, director Jacob Allen for joining all its elements into a delightful production.

Not to mention Carol Channing, Mary Martin, Barbara Streisand, Pearl Bailey, Bette Middler, and most recently, Michelle Pederson, for their joint contributions to the character of Dolly Gallagher Levi.

Supported by engagingly, yet simple staging by Cara Consilvio, a well-prepared cast of singers told the archetypal story of Cinderella with charm and flair. Framing the production was  a sparse but colorful set and wonderful lighting by Dave Brooks. END_OF_DOCUMENT_TOKEN_TO_BE_REPLACED

END_OF_DOCUMENT_TOKEN_TO_BE_REPLACED

The music isn’t easy to play, either. Over the course of two hours, all of the musicians brought fantastic focus to the unrelenting tricky rhythms and countless layers of parts, all of which require a high level of individual responsibility. Even in the moments of calm, the accompaniment remains perpetually unsettled. Adams — who made a sprightly presence on the podium — combines minimalist, repeating motives in gradual layers, which eventually become so dense they overwhelm the senses. Lisa Wong deserves special mention for her thorough preparation of the Cleveland Orchestra Chorus, as does Jennifer Rozsa for the Children’s Chorus, which made a brief but memorable appearance in the last few minutes. END_OF_DOCUMENT_TOKEN_TO_BE_REPLACED