It’s not often that one encounters a musical theater piece with book, lyrics and score all written by the same person. The Welsh genius Ivor Novello (nom de plume for David Ivor Davies) is one example of such a super-talented creator. Just the concept of such a thing is almost overwhelming, until you see his Perchance to Dream brought to life as the final production of Ohio Light Opera’s 2019 season. It sparkles and glitters and will not easily be banished from your memory bank. Yet another oddity about this production: the story line is very close to a time-travel romance. However, Londoners do know good theater when they see it. This one ran for 1,020 performances, roughly 2½ years after opening on April 21, 1945.

The play opens in 1818, with three main characters who will reappear in the second act set in 1843, and yet again in the final scene set in the 1930s. The setting for the entire piece is a Gothic-appearing mansion named Huntersmoon, owned by Sir Graham Rodney. Eventually, he will return as Valentine, the son of his nephew, William, and finally as Bay, the grandson of Valentine. Jacob Allen does a terrific job of portraying all three men, related to each other, but vastly different all the same. 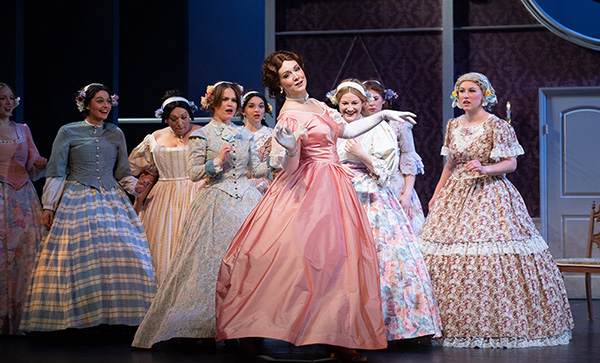 His first love interest is Lydia, then Veronica and finally Iris, all in the comely person of Sarah Best. We’ve seen her several times this season as singer, dancer and comedienne/goofball, but in this performance she demonstrates her fabulous voice, not to mention her considerable acting skills, portraying three very different women during three different eras. She does full justice to the most romantic songs in this production: “Love is My Reason” in the first act (as Lydia), “A Woman’s Heart” plus “We’ll Gather Lilacs” in Act II (as Veronica), and a reprise of the former in the final scene (as Iris). 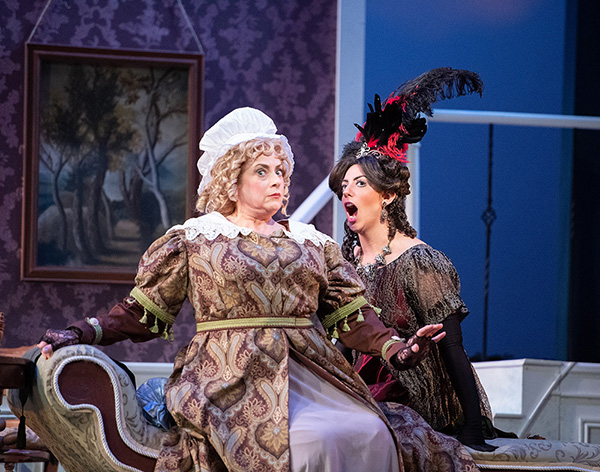 The other member of the time-traveling trio is Melinda/Melanie/Melody, superbly performed by Chelsea Miller. Melinda is the daughter of Lady Charlotte Fayre, Sir Graham’s aunt, perfectly portrayed by Julie Wright Costa. Lady Charlotte’s other child is the above–mentioned William — the dignified Tim McGowan. Their entrance is accompanied by the news that their coach was held up en route, and a valuable diamond necklace was stolen. Undercurrents flash between Melinda and Sir Rodney, and he assures her that he will rescue and return the necklace before her 21st birthday, which will occur during the next week. 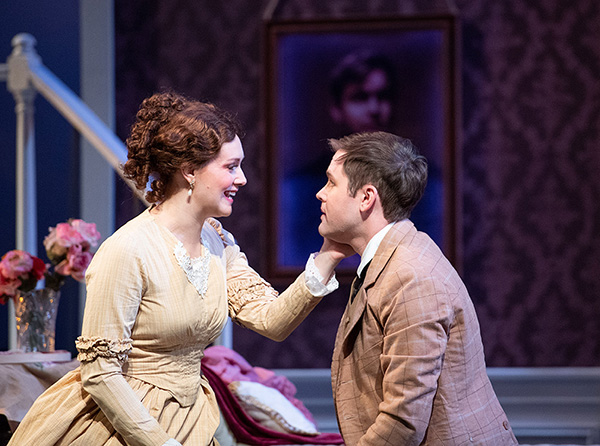 Yvonne Trobe has two turns in the spotlight: as Ernestine in Act I and as Mrs. Bridport in Act II (a terrific solo spot). Kyele Yampiro also performs double roles as Mazelli in Act I and the Vicar in Act II.

Act II opens in 1843, with Huntersmoon now in the hands of William’s son Valentine, a musician and chorus master. When Veronica (the love-child of Lydia and Graham) applies to his chorus, it is love at first sight, and they marry. Graham’s niece Melanie arrives and immediately creates confusion and tension among the others by her planned seduction of Valentine. However, Valentine is off to a command performance at Windsor Castle. There appears to be an extra-sensory connection between Valentine and Melanie. But Veronica has news of her own that will bear on the family for years to come.  She also has the big moment of the second act in ‘We’ll Gather Lilacs’ and “A Woman’s Heart.” 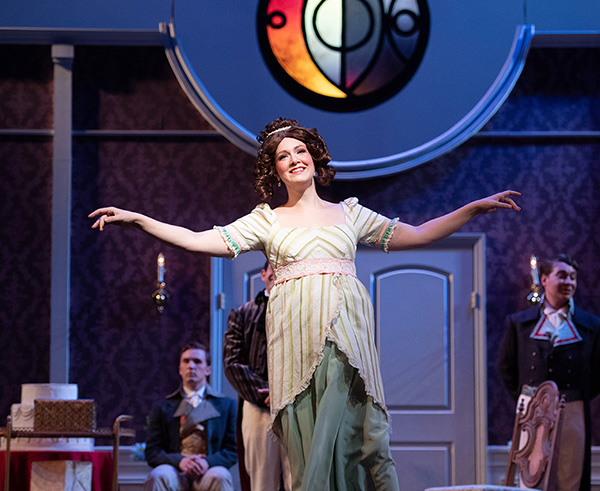 The final scene takes place some 83 years later, when the house is owned by Bay, the grandson of Valentine and Veronica. Numerous paintings decorate the gallery, portraying the characters who lived in the house in earlier years.

The production team, as always, provides a steady hand and voluminous knowledge to provide authenticity. Steven Daigle directs as though he’d lived through all three eras in the house. The splendid OLO orchestra is conducted by Steven Byess. Charlene Gross created fabulous costumes in varying shades of the time, which lend an unusual authenticity to the show. Lighting by Danial Huston was superb and sometimes spooky as required. Sound was by Tyler Quinn. However, it is the set by Daniel Hobbs that makes Huntersmoon seem the idyllic place it needs to be to cast its charm over the people who gather there. 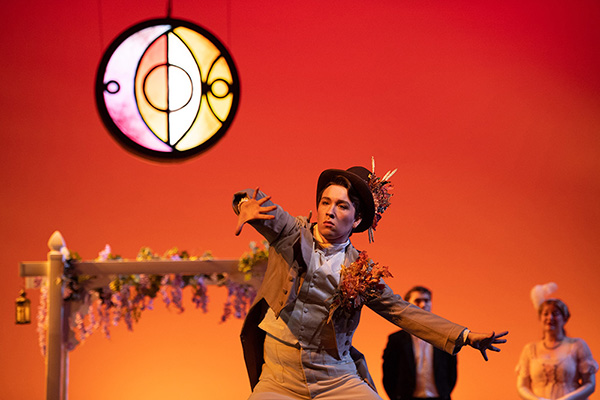 Choreographer Spencer Reese totally outdid himself this time, and deserves several gold stars for his efforts. There is a large party scene titled “The Triumphs of Spring: Singing Ballet” at the end of Act I, that involves the entire ensemble, but with ample solo opportunities for dancers. I would imagine that few opera companies have two male dancers as qualified for the spotlight as Adam Wells, who wore gold trim as Autumn, and Austin Rubinosky as Spring. They were terrific, and their strong leaps and spins made the stage appear much smaller than it really is. The ladies of Summer were Abby Kurth and Michelle Pedersen, while Winter featured Teryn Kuzma and Benjamin Dutton. What a fabulous way to end the act.

All in all, this is a splendid production, and deserves a run of full houses. It plays in repertoire through August 7 in Freedlander Theatre on the campus of The College of Wooster. Tickets are available online.

END_OF_DOCUMENT_TOKEN_TO_BE_REPLACED

Supported by engagingly, yet simple staging by Cara Consilvio, a well-prepared cast of singers told the archetypal story of Cinderella with charm and flair. Framing the production was  a sparse but colorful set and wonderful lighting by Dave Brooks. END_OF_DOCUMENT_TOKEN_TO_BE_REPLACED