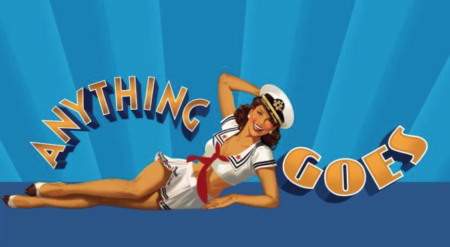 There should be something for every taste in Ohio Light Opera’s premiere production of Anything Goes currently on the boards at Freedlander Theater at the College of Wooster.

If you like tap-dancing, this is the show for you. The last 20 minutes of the first act is almost non-stop tap, tap, tap to the rousing title song. There is the song itself sung by Alexa Devlin as Reno Sweeney, with all the ship’s sailors around her. Then comes a 10-second stop to catch their breath, while Devlin goes to the upper deck for a reprise, this time joined by the passengers and sailors. Once the boisterous ovation dies down, there is yet another reprise, the cleverly-titled “Finale,” with the whole company on stage, hoofing away.

It’s an absolutely awe-inspiring performance. The gentlemen responsible for creating this enchantment are stage director Steven Daigle, conductor Steven Byess, and last, but by no means least, choreographer Spencer Reese, who was right out there, front and center, showing us how it’s done. I was exhausted just from watching.

Of course, any time you have music and lyrics by Cole Porter, you’re pretty much assured that you’re in for a treat. Beautiful melodies and beyond-clever lyrics are so satisfying, who cares if the plot doesn’t make a lot of sense. The original book is by P. G. Wodehouse and Guy Bolton, so it is still very enjoyable. It helps to know some of the history of the era in which it was first presented, which was the early 1930s.

Before she became the famous night-club singer, Reno Sweeney was a famous evangelist — really! Mostly she performs onboard ship, for the bright lights of society who went back and forth from New York to London in the days before airplanes were supposedly the best way to accomplish such a trip. She is somewhat infatuated with Billy Crocker (Spencer Reese) who is employed by the famous Ivy League/Wall Street banker, Elisha J. Whitney. Billy urges Reno to change her booking and travel on the same ship as Whitney, which will earn Billy an extra commission.

In the meantime, Billy has fallen for Hope Harcourt, an American debutante (Danielle Knox) who is traveling with her Mom (Julie Wright Costa). When he finds her on the ship with Whitney, he decides to sail with them, after all — with no ticket, no cabin, and no passport. Hope and her Mom are traveling to England to meet her proposed husband, Sir Evelyn Oakleigh (Ted Christopher). Their marriage of convenience will amalgamate their respective family businesses into one.

Also on board is the ‘Reverend’ Moon, a con-man wanted by the law on both sides of the Atlantic. In exchange for a bit of evasive behavior, he agrees to let Billy share his cabin. Mayhem ensues.

A wonderful quartet of ‘Angels’ are part of Reno’s retinue: Tanya Roberts, Grace Caudle, Teresa Perrotta and Sarah Best. They’re offset by the Ritz Quartette, Tom Carle, Christopher Sapp, Royce Strider and Jonathan Heller, who are doubling as sailors. This batch really lights up the stage. Except for the final scene of Act II, all the action takes place onboard the ship, with appropriate side-to-side motions every now and then that affect one’s balance.

In addition to the wonderful title song, other standards are “All Through the Night”, “I Get a Kick Out of You,” and “You’re the Top”. The sets by Daniel Hobbs are brilliant, as are the costumes by Kristina Miller. Lighting by Brittany Shemuga and Christopher Plummer add greatly to the overall ambiance.

But really, the dancing in that first act finale will put a smile on your face that’s guaranteed to stay with you for days.

The Cleveland Orchestra — or at least half of it — marked Valentine’s Day with a straight-through, 50-minute concert led by Belgian early music guru Philippe Herreweghe. The February 14 performance, marketed as a romantic evening of orchestral classics, played to a packed house (marketing works!). END_OF_DOCUMENT_TOKEN_TO_BE_REPLACED

Music is said to be a universal language, but it does speak with different accents. When you’re playing music by Jean Sibelius, it’s helpful to have a Finnish conductor on the podium, which is what made Susanna Mälkki’s pair of Cleveland Orchestra concerts so lucid and communicative earlier this month. END_OF_DOCUMENT_TOKEN_TO_BE_REPLACED

END_OF_DOCUMENT_TOKEN_TO_BE_REPLACED

Today’s touring string quartets hew to so uniformly high a standard that it’s often little individual touches that make ensembles stand out. The Polish musicians who make up the Apollon Musagète Quartet showed up at Plymouth Church in Shaker Heights for their debut on the Cleveland Chamber Music Society series on February 4 in matching plaid suits and black shirts. And jettisoning their jackets, they played standing (except for the cellist). END_OF_DOCUMENT_TOKEN_TO_BE_REPLACED