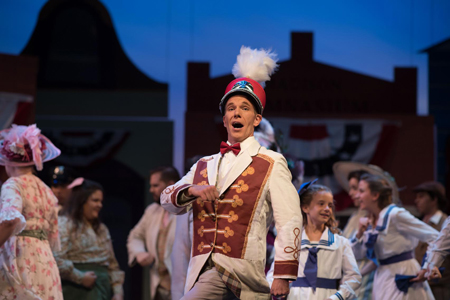 It’s common for productions of lyric theatre works to be placed in countries other than their original setting. But The Music Man is so American it’s hard to envision it taking place anywhere other than River City, Iowa. From the first whistle of the unseen drum major leading the ‘band’ during the overture, feet began to tap on the Freedlander Theatre floor — mine included. (Once a band member, always a band member.)

From the opening scene in the railway coach, which perfectly conveyed the essence of being on a train, to the rousing finale, the performance was flawless. The one I attended featured Ted Christopher — who also served as stage director —  as the exuberant Harold Hill. His Marian was the delightful Danielle Knox. Visually and vocally they were terrific. The next generation of the Christopher family were all onstage for the show — Madeleine as Amaryllis, Anna as Gracie Shinn. Ten-year-old Bryson as Winthrop succeeded so well during his show-off song “Gary, Indiana,” the ovation was the loudest I’ve heard there in fourteen years of attending Ohio Light Opera productions.

The plot, and there really is one, echoes a time in early 20th-century America when con men were a fact of life. In this case, ‘Professor’ Hill travels the mid-west selling band instruments and uniforms — but once he’s been paid he disappears. In River City he urges the band members to stop their depravity made possible by the local pool hall owned by the town’s Mayor Shinn — there’s trouble in River City. Meanwhile, librarian Marian Paroo, who doubles as the town’s music teacher, is rightfully concerned about her young brother Winthrop, who has an inferiority complex due to his lisp. 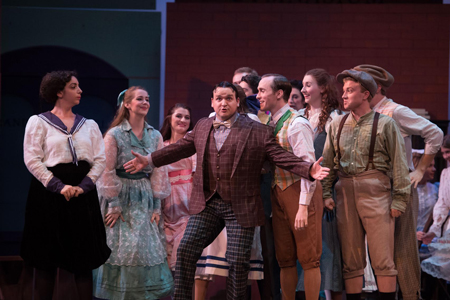 In spite of constant upheaval the instruments and the uniforms finally appear just in time for the big celebration at the city’s park. As the town celebrates the burgeoning band, young Winthrop demonstrates his ability to sing without a flaw. Old enemies emerge, but are discouraged. Finally the day comes to an end with Harold and Marian realizing their love for each other. Even the Mayor is happy! 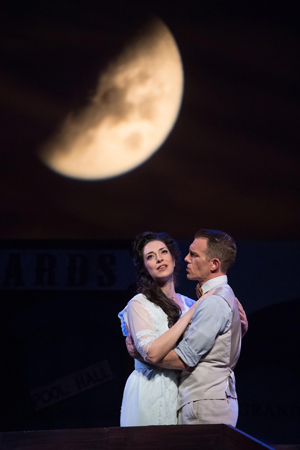 Conducted by J. Lynn Thompson, the OLO orchestra did itself proud masquerading as a small-town band. Spencer Reese’s choreography was perfectly matched to the era and  provided tons of laughter especially during ‘Pick-a-Little’ and ballet scenes. He was great as Tommy Djilas, who courts the mayor’s daughter, Zaneeta, played by the winsome Olivia Doig.

Yvonne Trobe was a great foil as Eulalie Mackencknie Shinn while Kyle Yampiro perfectly portrayed the Mayor in blow-hard fashion — together, they were a terrific comedy team. Alexa Devlin was the genial Mrs. Paroo, mother of Marian and Winthrop. The barbershop quartet was nothing short of marvelous, especially during the two-fers — two songs sung at the same time, as with ‘Lida Rose’ and ‘Will I Ever Tell You?’

Justin Miller’s set design coupled with Justin Gibson’s lighting, could comprise a tutorial on working with scrims and clever modular scenery. Charlene Gross’s costumes were gorgeous as well as colorful and appropriate — any band member would go bananas over those band uniforms. Christopher Plummer’s (not that famous actor) sound design was wonderful. 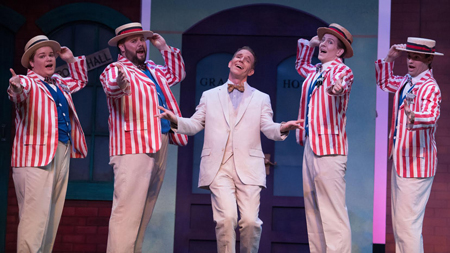 This performance of The Music Man was perfect and should not be missed. Especially if you’re a fan of American Musical Theater!

END_OF_DOCUMENT_TOKEN_TO_BE_REPLACED

A new CD by Christa Rakich, who is currently Visiting Professor of Organ at the Oberlin Conservatory, gives a nod in two directions. As its title announces, it’s an homage to her former teacher and colleague, the late Yuko Hayashi, longtime professor at the New England Conservatory and curator of Boston’s Old West Church Organ Series. It’s also the first recording to be made of Richards, Fowkes & Co.’s Opus 16 instrument, built in 2008 for Goodson Chapel of the Duke Divinity School in Durham, North Carolina. END_OF_DOCUMENT_TOKEN_TO_BE_REPLACED

END_OF_DOCUMENT_TOKEN_TO_BE_REPLACED

Hailed by the New York Times as “The Best Classical Music Ensemble of 2018,” Wet Ink Ensemble has lived up to this acclaim once again with their recent release Glossolalia/Lines on Black. The album takes its name from the two extended works by Wet Ink members Alex Mincek (saxophone) and Sam Pluta (electronics). The remainder of the septet includes Eric Wubbels (piano), Erin Lesser (flutes), Ian Antonio (percussion), Josh Modney (violin), and Kate Soper (voice). END_OF_DOCUMENT_TOKEN_TO_BE_REPLACED

Croatian-born pianist Martina Filjak, now living in Berlin, has released her latest album, Light and Darkness, featuring music by Franz Liszt — plus an epilogue by Arvo Pärt. The disc confirms once again all the special technical and interpretive qualities that won her the gold medal at the Cleveland International Piano Competition in 2009. END_OF_DOCUMENT_TOKEN_TO_BE_REPLACED