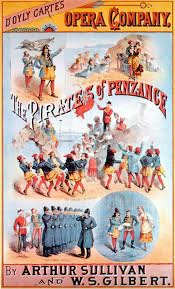 On Tuesday, July 1, the house was full and the audience bustled with excitement for Ohio Light Opera’s opening performance of Pirates of Penzance in Freedlander Hall on the campus of Wooster college. The customary standing and singing of “God save the Queen” set the tone for the afternoon’s English fare.  As the curtain raised we were immediately swept into the action, a rocky seashore on the coast of Cornwall, town of Penzance.

The Pirates of Penzance tells the story of Frederic, a young apprentice who was mistakenly indentured to a band of pirates in his youth. At the end of his servitude, Frederic decides to leave the pirates and devote his life to their extermination.  He meets a bevy of beautiful maidens, instantly falling in love with one of them, Mabel. Unfortunately, the pirates reappear and take the maidens captive, leading to a series of increasingly ridiculous plot twists.

Andrew Maughan handled the melody-laden role of Frederic with manly ease. His finely tuned voice melded warmly with those around him in his multiple ensemble scenes.

Aiden Smerud portrayed the swashbuckling Pirate King with authority while never over-singing in “O Better Far to Live and Die,” “Now for the Pirates’ Lair,” “When You Had Left Our Pirate Fold” and “Away, Away! My Heart’s on Fire.”

Julie Wright Costa played the wily Ruth (Frederic’s nurse) with exceptional stage presence.  Her solo “When Frederic was a Little Lad,” duet “O Better Far to Live and Die” and ensemble work were applauded warmly by the audience.

Chelsea Friedlander was outstanding as Mabel, the shining star in this production. She sang with powerful yet controlled resonance and solid production that carried clearly to the back of the hall. Her enunciation was impeccable.  “Poor Wand’ring One” and “Oh, Dry the Glist’ning Tear” were highlights, and her duets with Frederic were beautifully sung.

Mabel’s sisters, Edith, Kate and Isabel were delightfully portrayed and sung by Sarah Diller, Hannah Kurth and Janie Crick, who moved with poise and cohesion.

Stefan Gordon as Samuel and Andrew Gilstrap as the Sergeant of Police sang with pleasing resonance and vocal restraint.

Boyd Mackus carried a heavy load as the befuddled Major General Stanley.  Caught between the love for Mabel and his other daughters and the wrath of the pirates, he filled the daunting demands of the role with steady character and whimsy.  His patter-song “I Am the Very Model of a Modern Major General” had its moments of snappy rhetoric while occasionally straying from the beat.

This was a good performance with some fine moments.  A few more rehearsals/ performances will allow the company to attain the polish and professionalism for which it is so well-known and respected.

Jackson began the program with a recitation of Langston Hughes’ poem “Helen Keller” — the first of five poems by Hughes that served as interludes between each piece on the first half. END_OF_DOCUMENT_TOKEN_TO_BE_REPLACED

Pianos with pins and tape on strings, a bass drum and tam tam, crotales, Almglocken, and vibes. Microphones were hooked up all around the instruments. The feed was sent to speakers around the room. Lighting designer Nicholas Houfek hung incandescent globes over the arrangement of instruments from thin black wires stretching across the beams. END_OF_DOCUMENT_TOKEN_TO_BE_REPLACED

From the podium, Elim Chan set an ambitious tone for the evening. The rising star conductor, here in her Cleveland Orchestra debut, has a commanding style, and every twist and turn in Saturday’s performance tracked closely with her baton. END_OF_DOCUMENT_TOKEN_TO_BE_REPLACED