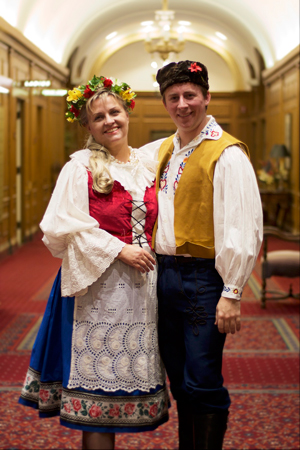 “For us this project has been nine years in the making,” Opera Circle Cleveland co-founder and executive director Dorota Sobieska said over coffee in Ohio City’s Hingetown neighborhood. “It is a very difficult opera in every respect, and the only way for us to produce it would for it to become a large-scale community collaboration.”

The opera played a significant role in the composer’s desire to create a truly Czech operatic genre, and today The Bartered Bride is considered to be a national treasure in the Czech Republic. Sobieska said that because part of the mission of the historic Bohemian National Hall is to preserve Czech and Slovak heritage, they have expressed interest in producing the opera on a number of occasions. “We came close to producing it once, but when a potential collaboration fell through, we were forced to put the production on hold.”

The stars began to align for the now twenty-year-old Opera Circle Cleveland during the fall of 2014. “About a year ago I spoke to my friend Carol Olson, who had just become the executive director of Voices of Canton Incorporated (VOCI), and she told me that she would like to produce The Bartered Bride to open VOCI’s 75th anniversary season.” Founded in 1939 as Canton Civic Opera, that organization’s first-ever production was Smetana’s opera.

Sobieska was thrilled with the prospect of finally having the opportunity to produce the opera. She soon had conversations with the Bohemian National Hall, and with Robert Cronquist, music director of the Cleveland Women’s Orchestra, who are celebrating their 81st anniversary this season.

“The opera is not only musically difficult, but requires a large cast and chorus as well as dancers and acrobats,” Sobieska pointed out, adding that all of the collaborators play an important role in bringing the production to life. 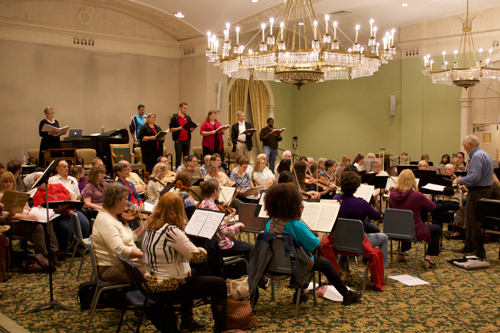 In addition to the Cleveland Women’s Orchestra, who is providing the musical accompaniment, VOCI, under the direction of chorus master Loren Veigel, is preparing and costuming the 60-member chorus. The Bohemian National Hall is providing the soloists with traditional period costumes, as well as coordinating the dancers and acrobats for each performance. Opera Circle Cleveland, Jacek Sobieski, music director, and Dorota Sobieska, stage director, is preparing the ten lead roles in addition to providing the stage direction. “The challenge is going to be producing the opera in two very different halls,” Sobieska said. “Timken Auditorium is big and the Bohemian Hall is small, so we’ll have to adjust from one space to the other.”

In addition to the great music, Sobieska thinks that another reason The Bartered Bride continues to remain so popular is that it’s full of characters we all have in our own neighborhoods. “You have Marenka (Dorota Sobieska), her loving mother Ludmilla (Cynthia Wohlschlager), and her confused father Krusina, (Charles Spencer), who has no idea what is happening. He thinks he does but he doesn’t.

Then you have Vasek (Adam Holcomb), and his likeable father Micha (Paolo Parodi), who sort of lost control when his wife died. Micha’s now married to Hata (Amy Yekel), a women who really rules the household, having chased out Micha’s older son Jenik (Brian Skoog), and is now the tiger-mother of Vasek.” 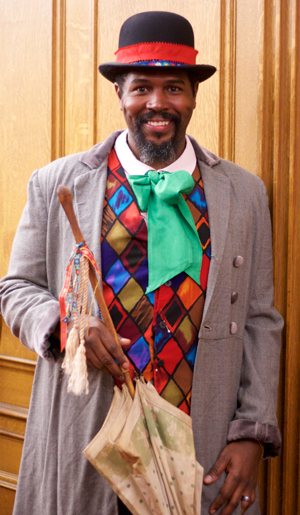 The cast will also include James Binion (above) as Kecal the marriage broker, Darius McBride as the Principal Komediantu, and Jessica Crowell as Esmeralda, dancer and comedian. To find out more about this arranged marriage gone awry, M. J. Albacete offers a comedic explanation of the hilarious plot, on the VOCI website, complete with a flow chart. Click here and enjoy.

Regarding the opera’s stage direction, Sobieska is sticking to the traditional production approach. “Human nature is universal and there is no need to add gimmicks to make the production more relevant to our present day. The opera is old and contemporary at the same time. The purpose of this  production is to present a large-scale community event that celebrates the average person who is involved in the arts. That’s what drives Opera Circle Cleveland — creating productions that speak to the average person.”

END_OF_DOCUMENT_TOKEN_TO_BE_REPLACED

Rodgers & Hammerstein’s Cinderella was originally produced for television in 1957 — seven years after the animated Disney film was released — and starred Julie Andrews. According to the Rodgers & Hammerstein website, it was viewed by over 100 million people. END_OF_DOCUMENT_TOKEN_TO_BE_REPLACED

The story line has its origin in an 1855 play and an 1842 farce that Thornton Wilder mined for his 1938 play The Merchant of Yonkers. When that turned out to be a flop, in 1954 Wilder made the crucial decision to re-center the show around the character of the legendary marriage broker Dolly Gallagher Levi and renamed it The Matchmaker. END_OF_DOCUMENT_TOKEN_TO_BE_REPLACED

The Dodero Center for the Performing Arts at the Gilmore Academy in Gates Mills is one feature of an impressive campus. The auditorium is shallow, the stage is deep, and the ensemble played without a shell. Throughout the program, the sound, especially in instruments’ lower registers, tended to disappear. END_OF_DOCUMENT_TOKEN_TO_BE_REPLACED