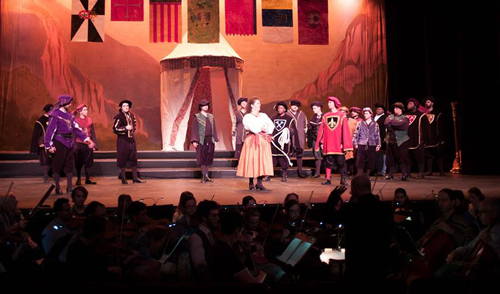 On Saturday, June 11, four years after Opera Circle Cleveland first took on Il trovatore at Bohemian National Hall, the company revisited the opera — one of Verdi’s most popular titles — at the Ohio Theatre in PlayHouse Square. A strong cast of singers and a fine professional orchestra led by Joel Smirnoff lifted the production well above some shortcomings of staging. 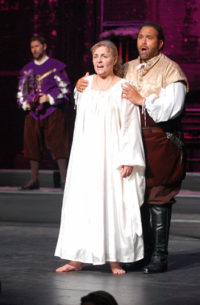 A lot of blood gets spilled during “The Troubadour” in ways gruesomely appropriate to its setting in 15th century Spain. Burnings at the stake, lopping off of heads, scapegoating, revenge and, finally, fratricide are all essential to the plot, along with mistaken identity, an abduction, and a retreat to a nunnery. All of the elements, expressed through Verdi’s dramatic music, endeared the audience to Il trovatore at its debut in Rome in 1853 — they demanded to hear the end of the third act and the entire fourth act all over again. 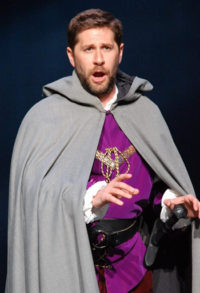 As Ferrando, the captain of the Count of Luna’s guard, the resonant bass Nathan Resika immediately seized and held attention with his lengthy prologue that summed up the backstory of the opera. No less compelling was the Cuban-born tenor, Jorge Pita Carreras, who sang the role of Manrico with ringing tone and arresting personality. Mezzo-soprano Christina Carr and soprano Dorota Sobieska reprised their 2012 roles as Azucena and Leonora. Carr mellifluously inhabited the maternal character of the Gypsy woman who threw the wrong child into her mother’s execution pyre. Sobieska sounded radiant as the lady-in-waiting who loves Manrico, a role tailor-made for her voice.

With the help of his responsive orchestra, Joel Smirnoff led a tight performance of the score. Balances were surprisingly good even though the orchestra pit was raised to floor level. 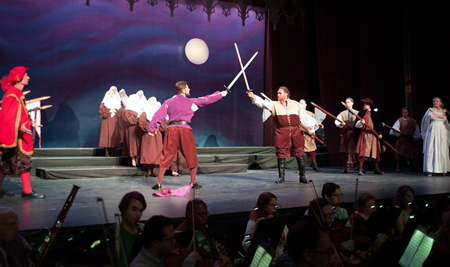 Supporting characters did themselves proud both as singers and actors: Kevin Wetzel as the Count, Brian Skoog as Ruiz, Lauren Wright as Ines, Joel Rhoads as an old Gypsy, and Cory James Svette as the messenger. The male chorus, trained by Jacek Sobieski, sounded magnificent, especially in the opening scene, and the female chorus provided some lovely offstage moments. The “Anvil Chorus” was especially robust.

The singing was more effective than the staging on Saturday evening. Crowd scenes froze the chorus into statuary, and the big scene where the nuns entered holding candles was a bit too picture-perfect in its symmetry. Singers who were supposedly interacting with one another often stood at opposite ends of the stage and faced out to the audience. 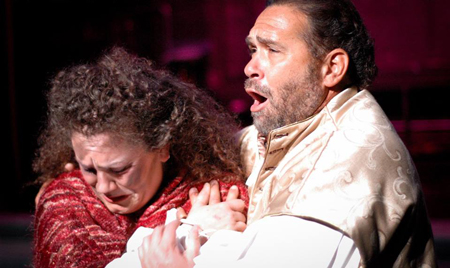 Il trovatore must inspire nightmares for stage directors and designers. Opera Circle’s production fell into three acts and its scenes moved among a number of disparate venues: a guard room in the castle of Luna, the palace gardens, a Gypsy camp in the mountains of Biscay, outside a convent, outside the fortress of Castellor, a chapel inside the fortress, outside the tower prison in the Aliaferia palace, and finally inside the dungeon.

That sequence of scenes would pose a challenge for a modern opera house with rotating set capabilities. Designer Charles Gliha chose to suggest each scene through minimal backdrops, lighting, a campfire here, and a clump of bushes there. In a clever move, the back wall of the stage house was nakedly exposed, electrical conduits and all, for the final dungeon scene — out of period, but eloquent. 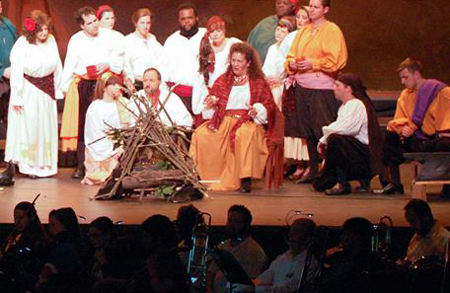 Most of the scenic effects worked well enough, but the decision to pause for a ten-minute intermission after the opening, fifteen-minute scene was completely unnecessary — perhaps the prologue could have been played in front of a curtain. Set changes that took up to three minutes each interrupted the flow of the drama.

The painted backdrop of hills for the Gypsy camp had probably once been young and vibrant, but Barbara Luce’s period costumes added essential color to the proceedings — as the festive heraldic banners did for another scene.