That “Great Fugue” pushes boundaries like no other Beethoven string quartet. Conceived as the sprawling finale to Op. 130, the movement was initially received so poorly that Beethoven’s publisher convinced him to replace it. It was eventually published separately as Op. 133.

Playing from the ZACH Theatre in Austin, Texas, and continuing their complete, chronological cycle of Beethoven quartets for this year’s edition of Orcas Island, the Miró opted to play the Große Fuge just the way they like it: right in its original position as the head-scratching, jaw-dropping, sixth-movement climax of Op. 130.

The preceding music is no slouch either. The opening movement shifts friskily back and forth between Adagio and Allegro, which allowed the Miró to show off both rich and jaunty playing, and purposeful transitions.

The Presto, the shortest movement in any Beethoven string quartet at about three minutes in length, was emphatic and lively, while the performance of the third movement could have been an advertisement for a luxury watch, such was the level of precision and technique from the ensemble.

Both floating and sweetly passionate, the danza tedesca showed first violinist Daniel Ching managing giant leaps with uncanny smoothness. In one sparsely-textured passage, the movement also gave an opportunity to clearly hear the distinct and beautiful tones of each individual player. 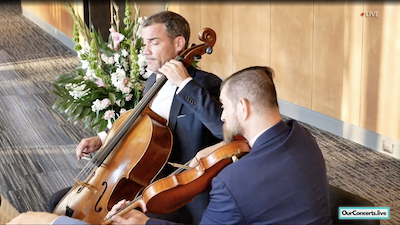 The famous Cavatina is often compared to an aria, but it feels more like a meditation on love — beautiful, yes, but stretched out and carefully considered. It also revealed the group’s remarkable chemistry in all different combinations. Ching and second violinist William Fedkenheuer traded off melodies with thorough familiarity and understanding. Later, Fedkenheuer joined violist John Largess and cellist Joshua Gindele in an engrossing accompaniment of shadowy triplets.

Director Quentin Tarantino likes to end his movies with long scenes of intricately choreographed, in-your-face carnage, often coming after a long and careful build-up. In comparison, the Große Fuge feels out-of-the-blue, making its sustained intensity and musical blood and gore even more shocking. At times, the music comes across as intentionally frustrating, in a way that’s somehow thrilling — a high-minded flipping of the bird at performers, listeners, and convention. The Miró put it across unflinchingly, replete with verve and self-assurance.

To help listeners follow along in certain passages, the technical team of OurConcerts.live switched to a grid of four separate cameras, something they’d done briefly earlier in the concert. Here, as each player struck up some new idea, their individual rectangle was highlighted, as you can see with Gindele below. 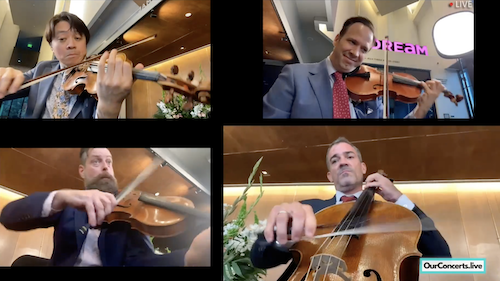 It was a clever touch of technology, one that was both helpful and distracting. It’s rare these days to see four people together in a room playing live music — that alone is a powerful sight. Dividing them up takes away from that, and reminds you of Zoom.

Late in the Große Fuge, the video suddenly stopped. Reloading brought you back a few moments earlier, only for you to get stuck again at the same spot — a musical version of the film Groundhog Day. Listeners took to the chat room, trading jokes and despair. “Beethoven overwhelms modern tech!” one person wrote. Another asked for a refund. A few debated the merits of the grid-like camera style.

Minutes passed by, and once the video returned, we were into the post-concert Q&A. When I checked back the next morning (videos are available for 24 hours for single-ticket buyers, or until August 15 for those who choose the festival pass), everything was smooth, and I was happy to catch the tail-end of the excellent performance.

One person in the chat room compared it all to another dreaded musical event: a mid-concert broken string. But it was better than that. Even in a disjointed form, we still got to hear what we were promised from this very impressive group, in superb sound quality. And though the Miró must have been disappointed to find out what had happened, it’s comforting to know that they likely had no idea in the moment, and could finish out this vastly challenging movement that represents an achievement to be proud of for any performer.

END_OF_DOCUMENT_TOKEN_TO_BE_REPLACED

Rodgers & Hammerstein’s Cinderella was originally produced for television in 1957 — seven years after the animated Disney film was released — and starred Julie Andrews. According to the Rodgers & Hammerstein website, it was viewed by over 100 million people. END_OF_DOCUMENT_TOKEN_TO_BE_REPLACED

The story line has its origin in an 1855 play and an 1842 farce that Thornton Wilder mined for his 1938 play The Merchant of Yonkers. When that turned out to be a flop, in 1954 Wilder made the crucial decision to re-center the show around the character of the legendary marriage broker Dolly Gallagher Levi and renamed it The Matchmaker. END_OF_DOCUMENT_TOKEN_TO_BE_REPLACED

The Dodero Center for the Performing Arts at the Gilmore Academy in Gates Mills is one feature of an impressive campus. The auditorium is shallow, the stage is deep, and the ensemble played without a shell. Throughout the program, the sound, especially in instruments’ lower registers, tended to disappear. END_OF_DOCUMENT_TOKEN_TO_BE_REPLACED